Thank you for reading.

Zelensky charms Washington. But will it be enough for the long haul? 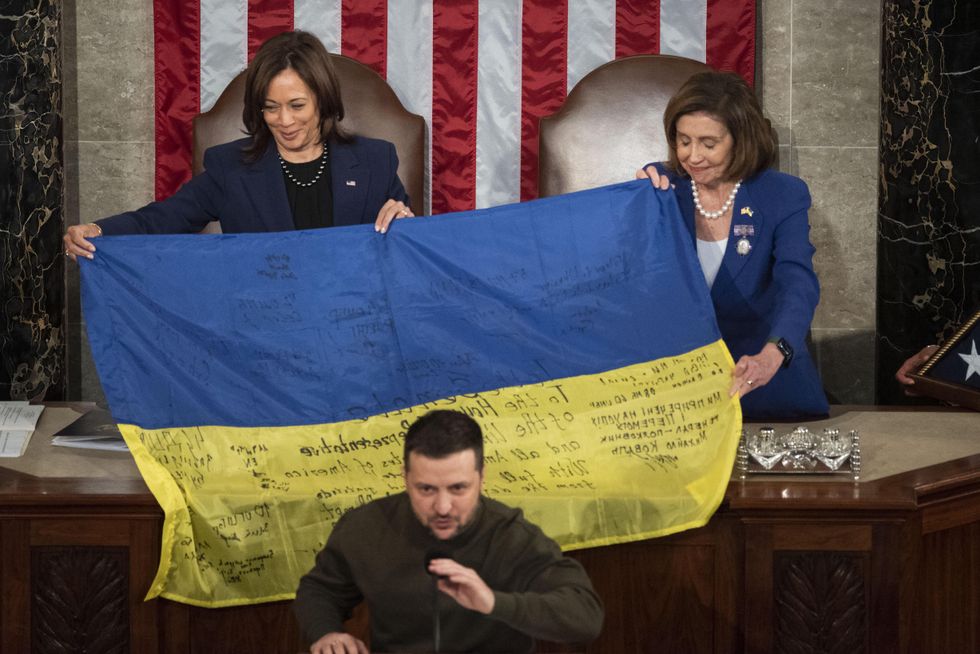 Days after Russia invaded Ukraine on Feb. 24, Ukrainian President Volodymyr Zelensky turned down US officials who offered to get him out by famously quipping: "I need ammo, not a ride."

Almost 10 months later, he finally got both.

The US and its NATO allies have given Ukraine a lot of weapons (and cash, too). And on Wednesday, Zelensky finally took that US airlift … to make his first foreign trip since the war began to Washington, DC.

“Your money is not charity. It is an investment in global security and democracy that we handle in the most responsible way,” Zelensky said during his speech to the US Congress, which some have compared in historical significance to Winston Churchill’s after Japan's Dec. 1941 attack on Pearl Harbor.

What a whirlwind year 2022 has been for Zelensky. When Russia invaded, many in the West feared it would be a cakewalk. They also doubted Zelensky, a 44-year-old former TV comedian and novice politician, would have the chops to lead his country at war against mighty Russia and the steely Vladimir Putin.

But 300 days into the war, the Ukrainians are still, in their president's own words, "alive and kicking." They've beaten back the Russians from most of the territory they had taken — thanks to both Russian military underperformance and stronger-than-expected Ukrainian resistance. The only thing that’s worked for Russia so far is hitting energy infrastructure to leave civilians cold and dark.

None of this would have been possible without Western aid. Beyond the symbolism of going to the White House and addressing Congress, that's what Zelensky's trip is all about.

Time is of the essence. The annual spending bill unveiled by Congress on Tuesday allocated almost $45 billion for Ukraine, more than half of which will go directly to beefing up the country's military muscle to fight Russia. Meanwhile, the State Department announced that the US would for the first time send a Patriot missile defense system — which Ukraine has been demanding for months.

"If your Patriots stop the Russian terror against our cities, it will let Ukrainian patriots work to the full to defend our freedom," Zelensky, clad in his trademark olive-green army fatigues instead of a suit, told US lawmakers.

As far as the US president is concerned, America’s love for Ukraine is mutual and unwavering. “We will stay with you for as long as it takes,” Joe Biden assured Zelensky during a joint press conference.

But how long for whom? Congress is set to lock in funding until late summer, when US support for Ukraine might enter a new phase under the GOP-held House, whose likely next speaker has already signaled that he won't give Zelensky a blank check.

When it's time to top up Ukraine’s balance, the Biden administration might face a perfect storm of crises: dealing with an influx of asylum-seekers at the southern border, funding the government for the next fiscal year, raising the debt limit, and avoiding a possible recession triggered by interest rate hikes to fight inflation.

America's commitment to Ukraine "will be challenged by Republican lawmakers who see the US sending money overseas but not securing the southern border, and by Democratic lawmakers who will question why more isn't being done to fight a potential economic slowdown here," Eurasia Group's US Managing Director Jon Lieber says in this week's US Politics in 60 Seconds.

Finally, optics also matter. The same week that the boss of NATO rolled out the red carpet for Zelensky, Putin barely got a shrug from one of his few remaining allies, President Alexander Lukashenko of Belarus. Unlike Biden with Ukraine, Lukashenko has little to offer Russia beyond a photo-op and Belarus as a launchpad to attack Ukraine.

And although Putin would appreciate US Republicans doing him a favor by penny-pinching Kyiv, he can’t afford to wait that long as the war drags on and the Ukrainians build momentum on the battlefield.

"Russia may indeed have that hope but won't be able to count on it,” says Eurasia Group analyst Zach Witlin. “Ukraine support is robust so far and not showing any signs of weakening, and it will take some time before the question rises again."

Zelensky's welcome in the West reinforces message of unity 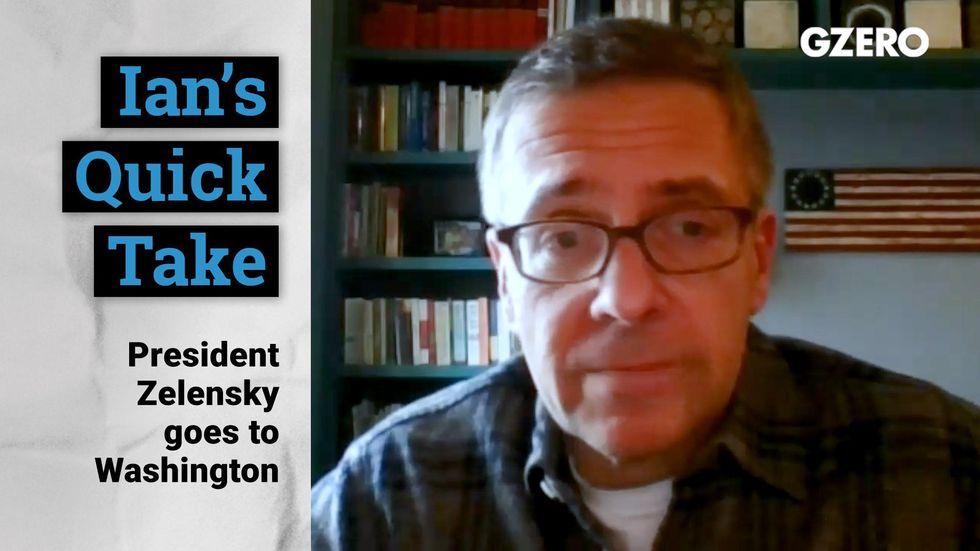 For Ian Bremmer, Ukrainian President Volodymyr Zelensky’s trip to Washington, DC, sends strong messages to Americans, Russians, and the world. It reflects political stability in Ukraine as well as the country’s military resilience and defense. But it also showcases what the US has done in leading a strong coalition to punish the Russians and to support Ukraine.

Financing the transition to net zero 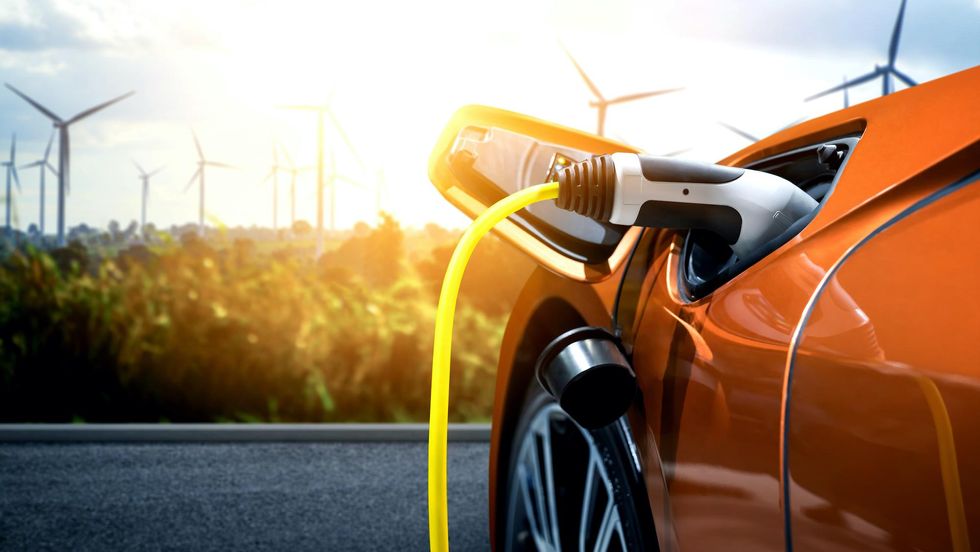 The transformation to a net-zero-emissions economy may be ambitious, but it is not impossible. By 2030, global investments in renewable energies must triple to $4 trillion per year. 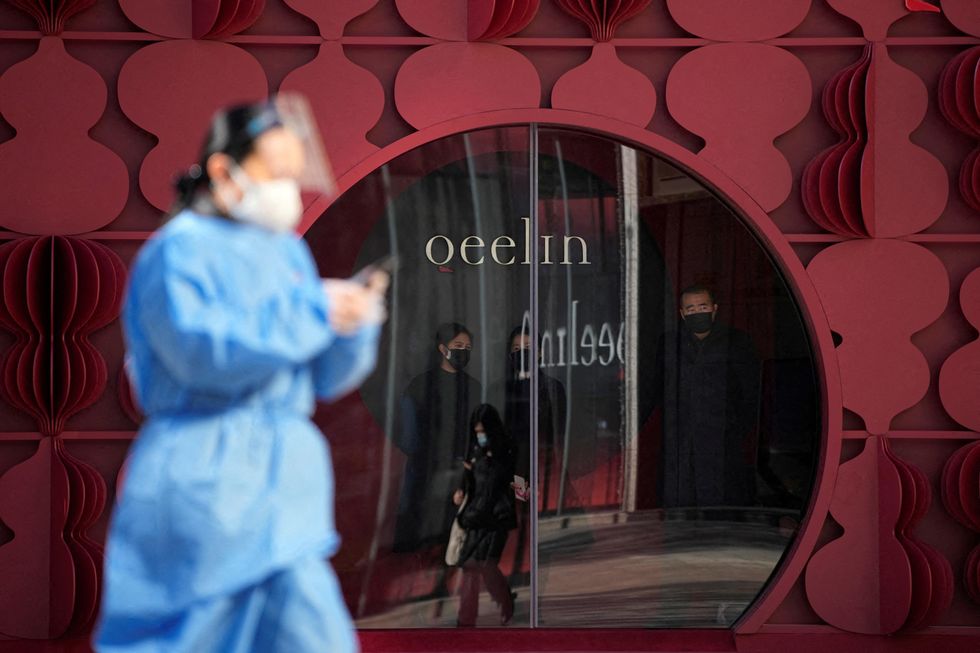 In recent weeks, China has announced an abrupt about-face on its zero-COVID policy, which imposed tough (and economically costly) restrictions on freedom of movement inside China for the past three years. Despite predictions that a sudden end to existing COVID rules could contribute to one million deaths, the state has lifted lockdowns, ended many testing and quarantine requirements, and halted contact-tracing systems. For a government that works hard to persuade its people that it protected them from the COVID carnage in Western democracies, it’s a big risk. How to keep the number of COVID deaths down? Just redefine what counts as a COVID death. Going forward, only those with COVID who die of pneumonia or respiratory failure will be counted as COVID fatalities. (The US counts any death to which the virus contributed as a COVID death.) China’s change will make it much harder for Chinese health officials to properly allocate resources to respond to COVID spikes, and more infections will create mutations that generate new variants that cross borders. Officials in many countries, including the US, have argued over how to define a COVID death, but the question is especially sensitive in an under-vaccinated country of 1.4 billion people.

“Australia’s approach is to cooperate where we can, disagree where we must and engage in the national interest,” Australia’s Foreign Minister Penny Wong said before touching down in Beijing for a meeting on Wednesday with her Chinese counterpart Wang Yi. It’s the first time a high-ranking Australian official has visited the mainland since 2019 due to extremely tense bilateral relations. Wong reiterated that the meeting itself was a triumph given that diplomatic ties were all but frozen until new Aussie PM Anthony Albanese was elected in May, promising to reestablish dialogue with China. While no major public breakthroughs were announced on trade impediments, Beijing and Canberra vowed to establish a consistent high-level dialogue. Why has the mood been so grim? Well, President Xi Jinping is especially peeved at Canberra for joining US efforts to build a bulwark against China in the Asia Pacific by joining alliances including the Quad and AUKUS. Things got particularly bad in 2020 when Australia backed calls for an international investigation into the origins of COVID-19, prompting Beijing to impose devastating tariffs and bans on Australian exports. The Albanese government is keen to fix that, given that key Aussie exports – like wine – have plunged due to Chinese tariffs.

Peru has ordered the Mexican ambassador to leave the country after Mexico City granted asylum to the family of former leftist President Pedro Castillo, who was recently arrested for trying to dissolve Congress and stage a coup. Simply put: Peru is a hot mess. Castillo, a former rural school teacher with no prior political experience, was accused of corruption and ineptitude and faced multiple impeachments during his year and a half in office. Castillo's wife is also being investigated for partaking in alleged corrupt activities. Peru’s government, now led by Dina Boluarte, recently declared a state of emergency to manage mounting social unrest that’s led to at least 26 deaths. Crucially, Mexico isn’t the only state criticizing Lima. Fellow leftist regimes in Argentina, Colombia, and Bolivia released a joint statement expressing concern over Castillo’s “undemocratic harassment.” Meanwhile, Peruvians continue to protest, with some calling for new elections and others demanding Castillo be released. While Peru’s Congress is set to greenlight early elections, they wouldn’t take place until April 2024. That’s unlikely to placate the angry masses.

What We're Ignoring: Whoever becomes the new Twitter boss

After 57.5% of Twitter users voted for him to step down as CEO in an online poll, Elon Musk now says he'll do it ... once he finds the right person to replace him. Hmmm. But even if he does, any incoming Twitter boss won't have as much free rein over the social platform as its mega-rich owner, who still plans to run the tech side. More importantly, why drop $44 billion on buying Twitter to let someone else call the shots? The poll result likely gave Musk the perfect excuse to get out but still do whatever he wants by pulling the strings behind the scenes so he won't face so much blowback. The problem is that whoever steps into his shoes, none of the Twitter fights that Musk has started over hate speech moderation or who gets verified will likely be resolved anytime soon. Unless, of course, the new CEO is Snoop Dogg, who clearly wants the job and would certainly make Twitter anything but boring. 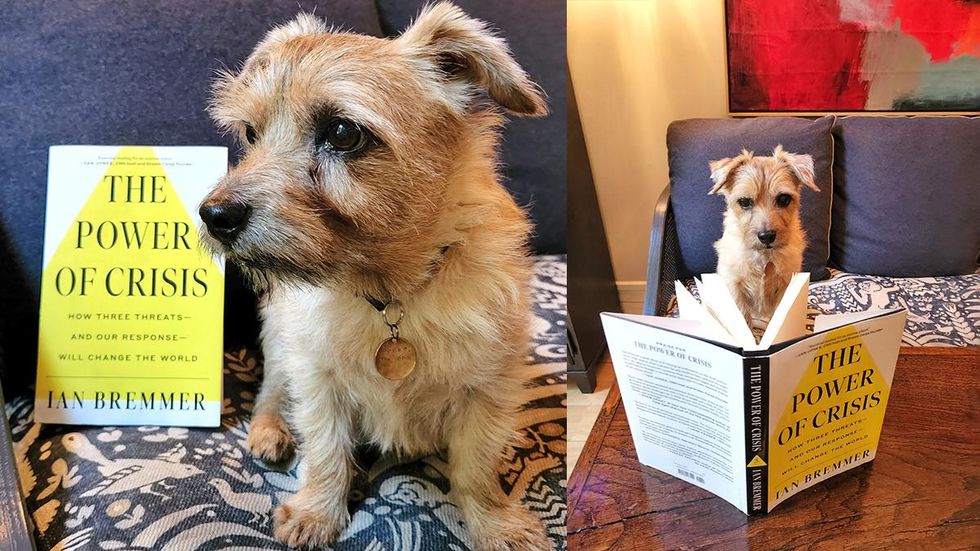 Tell your friends to sign up for Signal! If you refer at least four new subscribers, you could win a signed copy of Ian's latest book, "The Power of Crisis," recommended by Moose himself. Just copy and paste your personalized link (below) and share with your friends.

Find out more about what you can win. 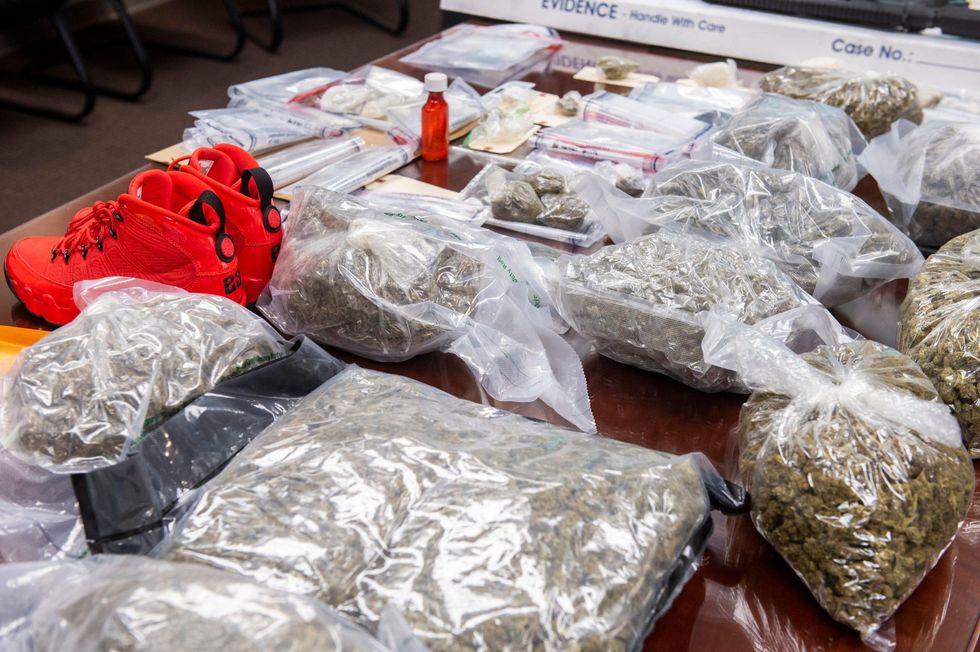 10,000: The fentanyl crisis in the United States is out of control. The Drug Enforcement Administration said it seized more than 10,000 pounds of the deadly stuff this year, double that of 2021. Federal agents say that’s enough to kill every single American.

160: At least 160 Rohingya refugees are stranded in a rickety boat in waters near the Andaman Islands, an Indian territory, having fled horrid conditions at a refugee camp in Bangladesh. Indian vessels have reportedly approached the boat that was aiming for Malaysia but have so far not helped the stranded people disembark.

50: Nearly 50 million Americans are under winter weather storm warnings as a “bomb cyclone” is expected to hit the midwest and northeast just as millions of people are preparing to travel for the holidays. Some airlines are offering travelers payouts to avoid the airport madness and ditch their flights … and miss Christmas with their families. Good deal or bad deal?

63: After his party won the most votes in last month’s general election, Israel’s comeback kid Benjamin Netanyahu announced that he’s formed a new government – the most right-wing in Israel’s history. This comes as a bill advanced through the Knesset on Wednesday – with 63 votes in favor, 53 opposed – that would make the police commissioner “subordinate” to the incoming (extreme right) Minister of National Security Itamar Ben-Gvir.

2: Two of now-disgraced FTX founder Sam Bankman-Fried’s associates pleaded guilty to fraud and will cooperate with US prosecutors investigating the collapse of the bankrupt crypto exchange fund. SBF himself was extradited from the Bahamas to New York and is scheduled to appear before a Manhattan judge on Thursday to face criminal charges.

This edition of Signal was written by Gabrielle Debinski, Carlos Santamaria, and Willis Sparks. Edited by Tracy Moran.