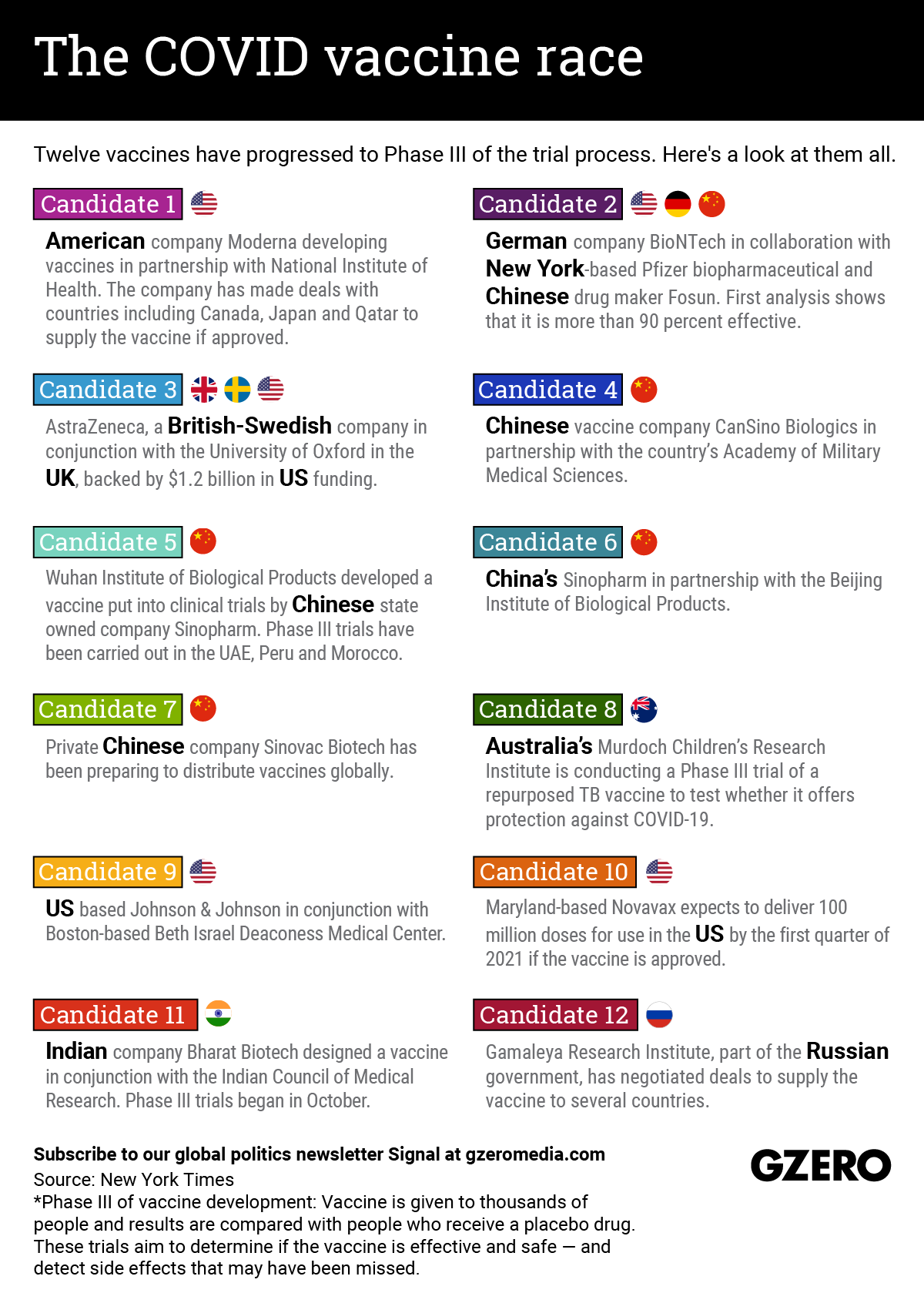 US pharmaceutical company Pfizer says that a preliminary analysis shows that its COVID-19 vaccine is 90 percent effective at preventing the coronavirus, far exceeding the expectations of the US Food and Drug Administration. While it usually takes many years to develop and widely distribute vaccines, scientists have been trying to get one ready within an unprecedented timeframe as COVID-19 has wreaked havoc around the world. Of the hundreds of candidates in development, only 12 have progressed to Phase III of the clinical trial process, when they are being tested on thousands of people and the results are compared with those who receive a placebo drug. Phase III is the final stage before approval. Who's gotten there so far?

Over the next decade, Walmart's $350 billion investment in U.S. manufacturing has the potential to:

How much (constitutional) change will Chileans get?

A year and a half after millions poured into the streets of Santiago to protest inequality and the vestiges of the Pinochet dictatorship, Chileans voted this weekend to elect the 155 people who will rewrite the country's constitution.

The question now is not whether the people want change — clearly they do — but rather how much change their representatives can agree on. Overall, the new text is widely expected to beef up the role of the state in a country where a strong private sector made Chile one of Latin America's wealthiest yet also most unequal nations.

Here are a few things to bear in mind as the constitutional rewrite process kicks off.

The Graphic Truth: How COVID is hitting Southeast Asia

In January 2020, Thailand became the first nation outside of China to record a case of COVID-19. But along with neighboring countries in Southeast Asia, Thailand managed to keep the coronavirus mostly at bay last year by swiftly enforcing lockdowns and other public health measures. However, having barely rolled out COVID vaccines, in 2021 many Southeast Asian nations are now grappling with massive new outbreaks of disease. Cambodia's caseload is surging, leading Prime Minister Hun Sen to say that his country was on "the brink of death." Meanwhile, Malaysian officials struggled to enforce domestic travel restrictions during Ramadan, causing cases to skyrocket in recent weeks. We take a look at COVID-19 caseloads in Southeast Asian countries with the highest daily caseloads this year.

Morocco punishes Spain with... migrants: Spain has sent in the army to help defend the border in Ceuta, a tiny Spanish enclave on the Moroccan coast, after more than 8,000 migrants crossed over in just two days. Spanish border guards say that Morocco facilitated the migrants' departure, most of whom are Moroccan nationals, to punish Madrid for meddling in Morocco's internal affairs over Western Sahara. Last month, Madrid allowed the leader of the pro-independence Polisario Front to seek treatment for COVID in a Spanish hospital, infuriating Rabat, which claims the former Spanish colony of Western Sahara as part of its territory. The Moroccans, for their part, deny involvement in the mass exodus. However, that seems questionable given that Morocco has traditionally overreacted to any hint of Spanish support for Western Saharan independence. But Spain won't want to rock the boat too much because it needs Morocco's help to stop African migrants from flooding Ceuta and Melilla, the other Spanish enclave in Morocco. If the spat is not resolved soon, the European Union may have to step in to mediate because once the migrants are on EU soil, they are free to travel to other EU countries.

20 million: The US will donate 20 million doses of federally authorized COVID vaccines to countries in need. This is the first time the Biden administration has agreed to send shots approved for use in America. Washington previously pledged to send by the end of June 60 million shots of the AstraZeneca vaccine, which the US has stockpiled but lacks FDA approval.

Cyber is a tool, and sometimes a weapon. Whether espionage for commercial gain or indiscriminate attacks on critical infrastructure, actions taken in cyber space affect you directly, potentially upending even the most mundane realities of everyday life.

A big reason the Chinese leader is pushing harder than ever to annex Taiwan is actually quite small. The self-governing island has an outsize manufacturing capacity for semiconductors – the little chips that bind the electrical circuits we use in our daily lives. Cell phones, laptops, modern cars, and even airplanes all rely on these tiny computer wafers. Taiwanese chip manufacturer TSMC alone makes more than half of the chips outsourced by all foreign companies, which means your iPhone likely runs on Taiwanese-made semiconductors. What would happen to the world's semiconductor chips if China were to take control of Taiwan?

Watch the episode of GZERO World with Ian Bremmer: What could spark a US-China war?

Will there be a ceasefire in Gaza? Fighting between the Israeli military and Hamas/Palestinian Islamic Jihad militants in the Gaza Strip has now entered its second week. Over the weekend, Israel intensified its bombing of the Gaza Strip, which included targeting a building that houses Al-Jazeera and AP, two foreign media outlets, causing their reporters to hastily flee the premises (Israel has so far not substantiated its claim that Hamas intelligence operatives were working in the building.) At least 42 Gazans were killed in a single Israeli strike Sunday, bringing the Palestinian death toll above 200. Meanwhile, Hamas continued to fire rockets at southern and central Israel, resulting in several casualties. On Monday, for the first time since the violent outbreak, US President Joe Biden voiced support for a ceasefire driven by the Egyptians and others. However, Benjamin Netanyahu, Israel's prime minister, has said that the operation will "take time," and a truce is off the table until Hamas' military capabilities are significantly degraded. Civilians on both sides continue to suffer.

How much (constitutional) change will Chileans get?

The Graphic Truth: How COVID is hitting Southeast Asia

Israel-Palestine violence explodes: what happens next?

Netanyahu and Hamas both won, Israelis and Palestinians lost