On this edition of The Red Pen, where we pick apart the argument in a major opinion piece, Ian Bremmer is joined by Eurasia Group's Daniel Kerner, Carlos Petersen, and Ana Abad to take on an an op-ed from the FT about Andrés Manuel López Obrador, aka AMLO.

It's about Mexico's president Andrés Manuel López Obrador, or AMLO as he's widely known. AMLO was elected in a landslide victory nearly two years ago by voters who were fed up with corruption in their nation. Now, a growing number have buyer's remorse as the economy continues to spiral downward and crime and corruption still remain high.

The article correctly points out this has not been a good couple of years for Mexico or for AMLO, and we agree with that assertion. But it's time to get out the red pen, because we're not buying a central argument of this piece.

The FT writes that AMLO is an "authoritarian populist," and under his leadership, Mexico is headed for a "more repressive" system. The article cites a litany of aggressive behavior against his critics, such as intimidating the media or calling out environmentalists who don't like his infrastructure projects. "When a president demands 'blind loyalty,' from officials," the FT writes, "alarm bells should ring." 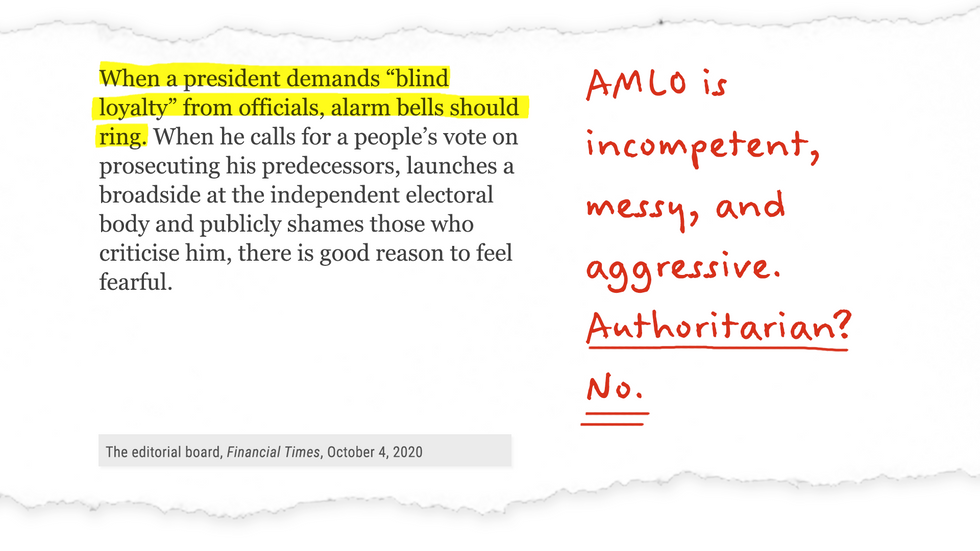 Sure, AMLO is incompetent, his policies are messy, and he uses aggressive rhetoric. But we need to separate his bark from his bite. Is he intolerant and hostile? Yes. Is he suppressing protests, shutting down media outlets, and disrupting the electoral process? No.

Next, the FT writes that while AMLO won a big victory in 2018, he did not win "a mandate to dismantle institutions" in Mexico. 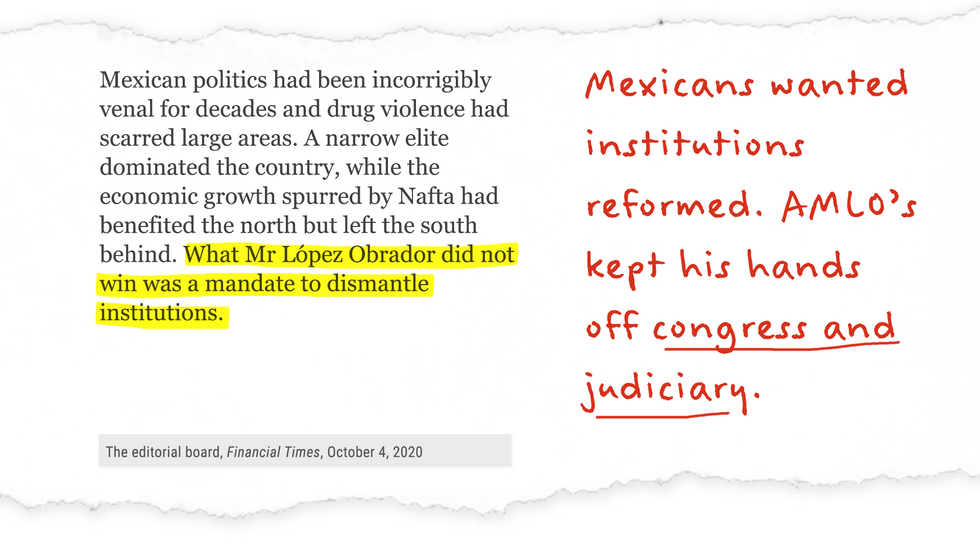 Actually, Mexicans elected him president precisely they didn't trust those institutions and felt they were only there to benefit the rich. Many of those same institutions were already weak or in need of reform. AMLO has accepted limits in congress and the judiciary and has made no mention of broad institutional changes--as other truly authoritarian leaders have done.

Finally, the FT writes that under AMLO, "The golden opportunity offered by the newly-agreed US-Mexico-Canada free trade agreement to lure American companies returning from China to Mexico is being squandered." And that is just wrong.

We definitely need some red ink on this one. USMCA would not have advanced without AMLO's full support. It was approved just last year, and then the pandemic hit the economy. It's hard to say what longer-term impact it will have. But while AMLO could have played hardball with Trump and ruined one of the most positive developments in the Mexican economy, he did the opposite.

There's another point the op-ed misses which better explains why AMLO is president at all—Mexico endured a couple of decades of weak leadership, widespread corruption and the impact of violent drug wars, and disappointing economic growth.

AMLO may not end up being the right guy to turn all that around for a number of reasons, but calling him authoritarian is a gross exaggeration.

There you have it. That's your latest edition of The Red Pen.
From Your Site Articles
the red penmexicoamloandrés manuel lópez obradorrfinancial timespopulismauthoritarianlatin america