China's EU deal betrays insecurity; not a wedge between US & EU

In our first edition of The Red Pen for 2021, we take a look at an editorial by the FT's Gideon Rachman, who argues that the recent EU-China treaty will complicate President-elect Biden's ability to handle China and rebuild the US-EU relationship. Ian Bremmer and Eurasia Group's Michael Hirson point out the deal actually demonstrates how much Beijing fears being out-maneuvered by Biden.

There's a lot going on in the world, and obviously plenty to discuss right here in the United States where our democracy is getting tested like nobody's business. But that doesn't mean that good op-eds out there don't deserve to be sparred with. And, I don't want to just neglect all those perfectly important writers, so we have one this week.

Turning our attention abroad to how China factors in as President-elect Joe Biden takes office in a short period of time … and what role Europe will play in how the United States approaches the second biggest economy, soon to be first, on the planet.

The op-ed we're marking up is by Gideon Rachman. He's the chief foreign affairs commentator at the Financial Times. And the piece is entitled, "Europe Has Handed China A Strategic Victory." He argues against a recent investment treaty between Europe and China championed by European Commission President Ursula von der Leyen, also heavily supported by German Chancellor Angela Merkel. And it's viewed overall as a deepening of financial ties and commerce between Europe and China.

Now as a little bit of background, the deal, which was several years in the making, boosts market access in China for European firms in sectors such as autos and finance.

Now Gideon argues that the European Union has just handed China a big win despite all of that nation's diplomatic and humanitarian transgressions…and that this is going to further complicate things for incoming President Joe Biden as he tries to figure out how to deal with China.

Now, agree with Gideon, it's a significant development. And also, it's true that Europe does appear to be flexing its muscles a bit here: The US can do a unilateral trade deal with China (Phase One) and so can Europe. But is this going to change the geopolitical landscape? No, and the argument goes too far on that point.

First, Gideon writes, "Ms. Von der Leyen concluded 2020 by sending a truly awful geopolitical message — as her commission signed off on an investment treaty between the EU and China."

Well, the EU also has said it agrees with the United States "on the strategic challenge presented by China's growing international assertiveness." And there are many humanitarian and diplomatic issues Europe as a whole has strongly condemned—from China's attack on democracy in Hong Kong to its treatment of Muslim minorities. This is a fairly narrow deal, not a white flag on the relationship.

Number two, Gideon describes the timing of the deal as "exquisite" for China, driving a wedge between Europe and the US on the eve of Biden's inauguration.

Now you can make that argument, but let's be clear, Beijing was clearly intent on rushing to get the deal done before Biden took office and ended up giving a lot of benefits to the Europeans accordingly. Does that sound like a confident superpower? Or, rather, like an insecure country worried about being out maneuvered by Biden and preparing to face a lot more coordinated and multilateral pressure? In other words, China might have grabbed what it could at a fire sale before Biden comes in to remove the wedge that has existed between Europe and the United States under the Trump administration. 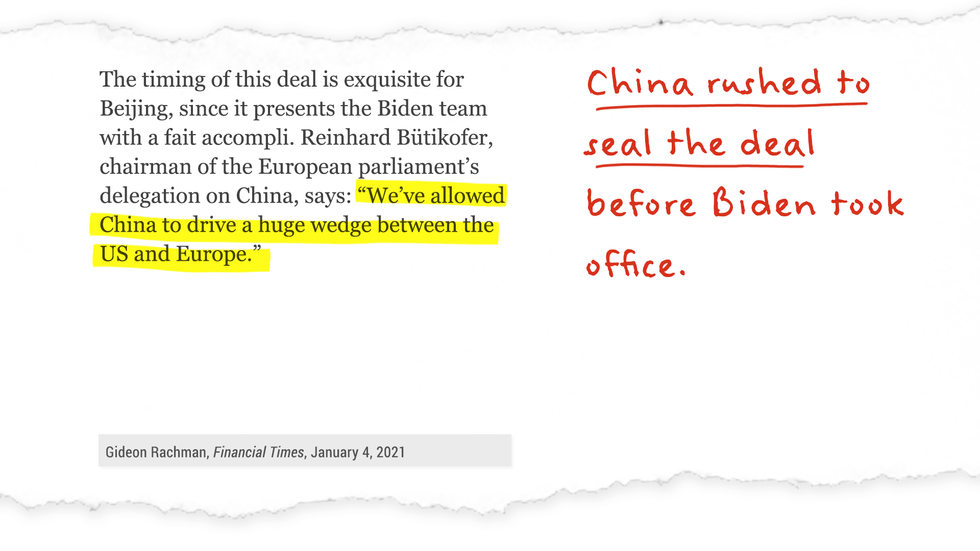 Now on that, Gideon describes this deal as a "kick in the teeth" to Biden, who wants to restore ties to some of our strongest global allies in Europe.

Now, it's a wake-up call. But Beijing keeps digging its own diplomatic hole, from turning away WHO inspectors to conducting mass arrests in Hong Kong. And that's just this week. The new Biden team's commitment to transatlantic cooperation is going to go a long way to repairing the US-Europe relationship. 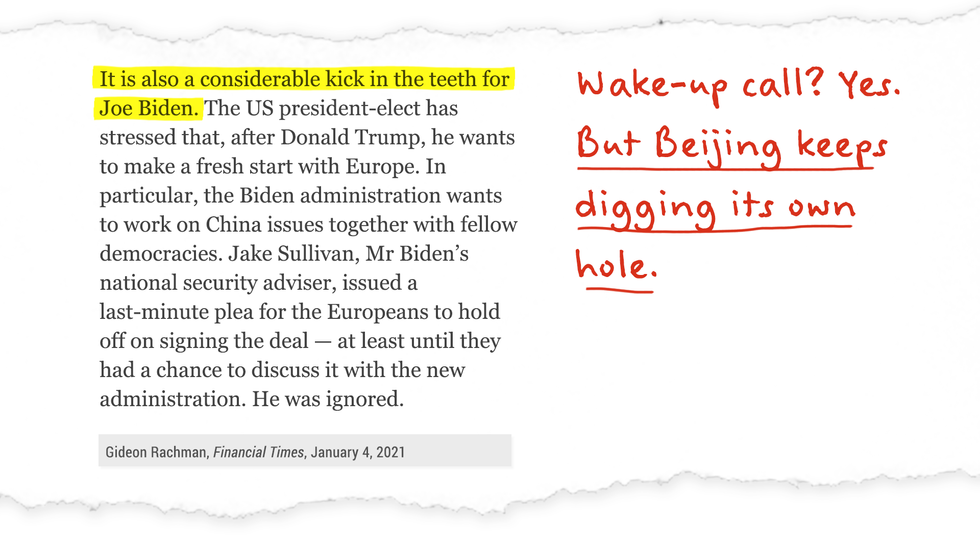 Finally, Gideon writes that Europe "is naive to believe that China will respect the agreement it has signed…And it is naive to think that the darkening political climate in Beijing will never affect life in Brussels or Berlin."

Now sure, you can point to plenty of examples of China not holding up its end of the bargain. Gideon mentions the WTO agreement in 2001. He's right. Also, in the terms of this EU/China deal, Beijing is expected to deliver on things like climate action, reducing favoritism to state-owned businesses, and improving labor practices. All kind of red lines for the Chinese state capitalist system. Good luck with that. But let's be clear, when China fails to meet those terms, that ends up working in America's favor and makes any EU/China agreement short-lived at best. It gets weaker as a consequence of that. 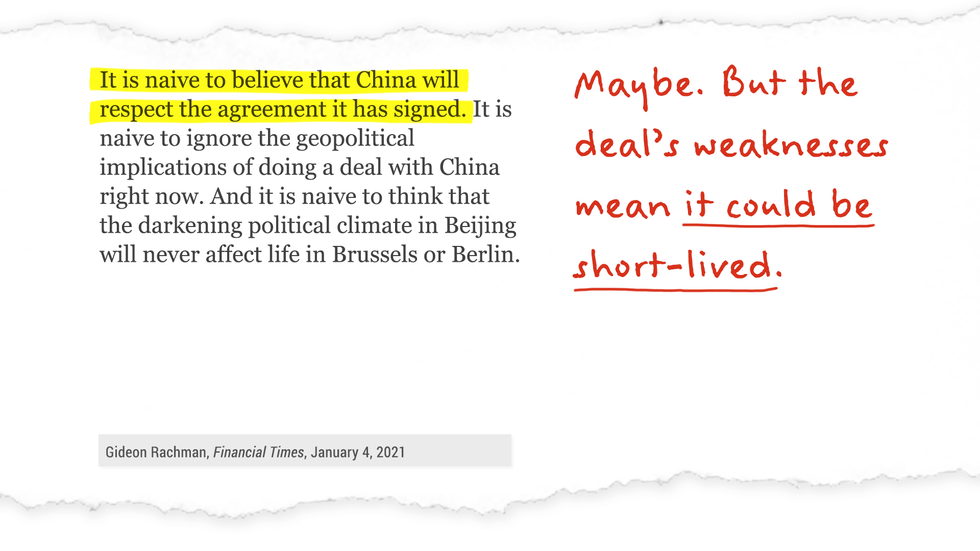 So, is it the end of the world order as we know it? No. But is China, and how its growing economic influence and power impacts every nation, going to be a big issue for Biden…and beyond? Yes. We just don't think Ursula von der Leyen or the EU did something "truly awful," as Gideon states.

Meet the Merchant of Death

“Like I’m living in the forest”: a darkened Kyiv faces General Winter

Griner freed, but in exchange for Merchant of Death — who won?