The Graphic Truth: How many refugees does the US let in?

Immigration has been a major challenge for the nascent Biden administration, testing the new US president's ability to placate moderates on both sides of the aisle, as well as the progressive wing of his own party. Biden initially pledged to keep the US' annual refugee cap at 15,000 — a "ceiling" set by the Trump administration, the lowest in US history. But after that move sparked swift backlash, Biden this week reversed course: 62,500 refugees will now be allowed to enter the US over the next six months. How does this compare to policies set by previous US administrations? We take a look at refugee admittance numbers since 1980.

The Graphic Truth: Is Modi immune to the COVID crisis?

COVID-19 is ravaging India. Makeshift crematoria are popping up to accommodate piling-up bodies, while oxygen and hospital bed shortages have led to a string of otherwise avoidable deaths. The images coming out of the country are haunting, prompting the Biden administration to reverse course and agree to send equipment and vaccine ingredients. But while India descends further into catastrophe, in large part because of a host of political missteps, the approval rating of nationalist Prime Minister Narendra Modi remains steady. We take a look at whether Modi's approval rating has changed against the backdrop of a deepening COVID crisis.

As the price of Bitcoin has skyrocketed in recent months, so has the amount of energy that procuring it hogs. Research shows that Bitcoin "mining" now uses 80 percent more energy than at the start of 2020. Billionaire philanthropist Bill Gates recently sounded the alarm on crypto, saying that he would not invest in Bitcoin because mining for the digital currency requires huge amounts of energy, much of which is powered by fossil fuels that harm the environment. So where does Bitcoin rank in electricity consumption compared to nations?

The Graphic Truth: Two different pandemics - EU vs US 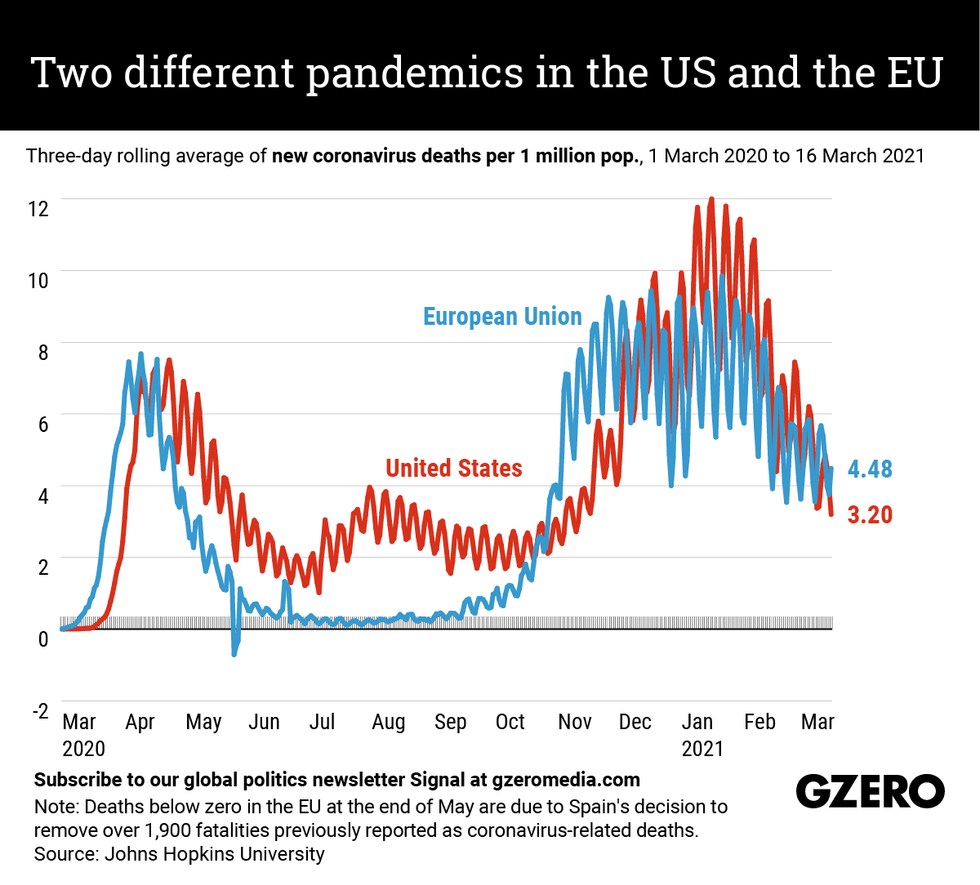 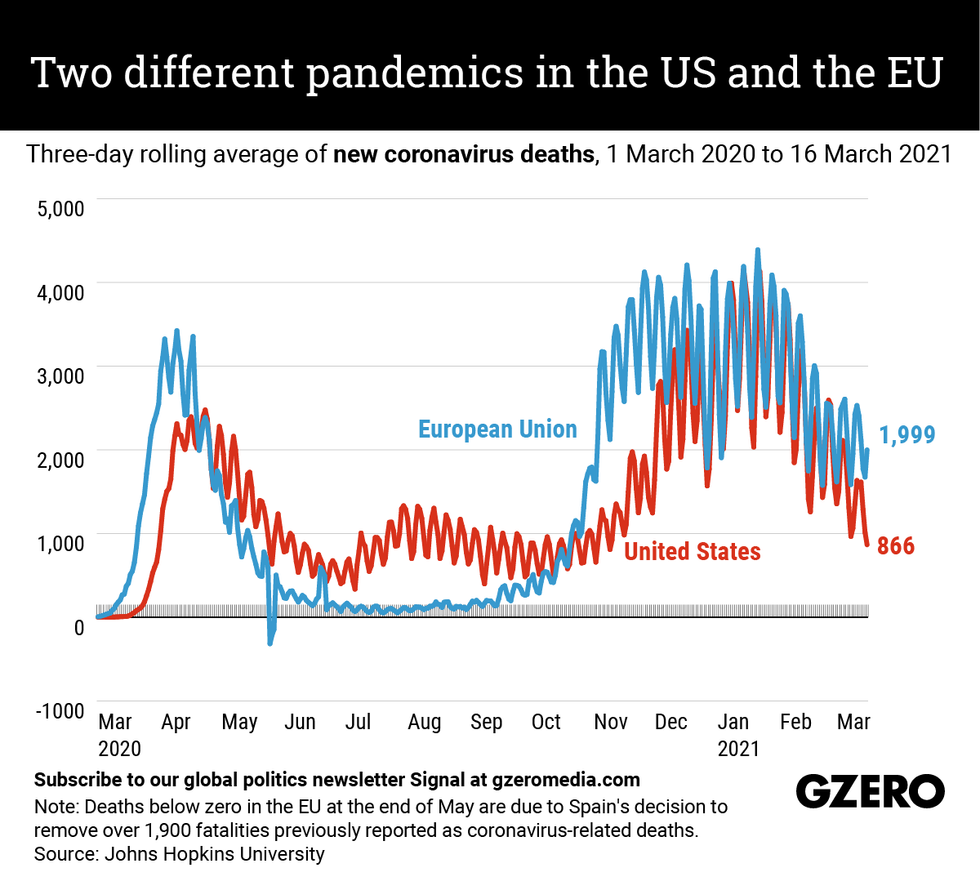 The United States and the European Union have comparable population sizes, but the trajectories of their COVID-19 outbreaks in recent months have been quite different. While the US experienced a full-blown third wave of the pandemic after the winter holiday season, factors including the roll out of a competent vaccine drive have resulted in a significant decline in COVID cases, hospitalizations, and deaths. In Europe, however, cases are rising exponentially in many places, and many countries are again resorting to strict lockdown measures to curb the virus' spread. The EU has been widely criticized for bungling the vaccine rollout, which is likely to result in unavoidable deaths and economic pain. Here's a look at the seven-day rolling average of new COVID-19 cases, and three-day rolling averages of new deaths and new deaths per capita in the EU vs the US over the past year.

The Graphic Truth: Can we work only 4 days a week?

This fall Spain plans to launch what will be the world's first national pilot program for a four-day workweek. The idea has gained popularity in recent years to encourage productivity, boost workers' mental health, and fight climate change (less commuting means less pollution). The pandemic, particularly with its stresses on mental well-being, has added urgency to the proposal. That's why other countries — especially those with strong labor protections and short workdays — are paying close attention to the experiment, under which the Spanish government will subsidize part of a company's cost to transition its employees to a four-day workweek. Here's a look at how long workers are generally on the job in other OECD countries (without accounting for paid leave in any of them).

The strength of global democracy was tested by the coronavirus in 2020 — and COVID mostly won. The Economist Intelligence Unit's Global Democracy Index fell last year by an average 0.07 points, the biggest drop since the annual ranking was first compiled in 2006. Government-imposed restrictions on individual freedoms and civil liberties due to the pandemic are partly responsible for the decline, and this is true for a majority of countries regardless of how well they managed the pandemic. We take a look at how democracy performed in 2020 in the 10 countries that handled the pandemic best and in the 10 with the worst responses, as measured by the Lowy Institute.

China is the world's most populous country, with a whopping 1.4 billion people. In fact, many individual Chinese provinces would rank among the most populous nations on Earth in their own right. The economic powerhouse of southeastern Guangdong, China's most populous province, is home to as many people as Ethiopia. Up north, Heilongjiang's population is the roughly the same as Australia's. Even the island of Hainan, China's least populous province, is equal in population size to the Eastern European nation of Belarus. Here's a map of China, in which each province is tagged as a country with a similar population size.

Since Martin Luther King Jr delivered his iconic "I have a dream" speech in August 1963, the number of Black Americans elected to the United States Congress has dramatically increased. Still, it wasn't until 2019, more than half a century later, that the share of Black members serving in the House of Representatives reflected the percentage of Black Americans in the broader population —12 percent. To date, only six states have sent a Black representative to serve in the US Senate (recent runoff elections will make Georgia the seventh state), and many states have never elected a Black representative to either house of Congress. Here's a look at Black representation in every US Congress since 1963.

The Graphic Truth: How many refugees does the US let in?

The Graphic Truth: Is Modi immune to the COVID crisis?

The Graphic Truth: Two different pandemics - EU vs US

The Graphic Truth: Can we work only 4 days a week?