November 20, 2020
GZERO Media
Don’t "Give Up" on All 73 Million Americans Who Voted For Trump | The Red Pen | GZERO Media
youtu.be

In an op-ed in the New York Times, author Wajahat Ali says he's giving up on reaching out to Trump supporters and thinks Ian Bremmer and others shouldn't bother trying. On this edition of The Red Pen, where we pick apart the argument in a major opinion piece, Ian and Eurasia Group's Jon Lieber explain what Ali got wrong - and right - and why it's important to see the 73 million Americans who voted for Trump with nuance.

Hi, everybody. Ian Bremmer here with your latest edition of The Red Pen. And today we're taking our red pen to an op-ed by New York Times contributor and author, Wajahat Ali. The title says it all, Reach Out to Trump Supporters, They Said. I Tried. I Give Up.Wajahat is saying that trying to understand and connect with Trump supporters is futile for the other side, and that a chorus of voices, mine included, according to Wajahat, who name-checks me and Pete Buttigieg as wasting our breath, are fighting a losing game trying to promote empathy. Here's the tweet from me he specifically referenced.

So, I want to start by saying that there is a lot that Wajahat points out in this piece that is irrefutable. He's right that Trump has worked hard to further divide America. He's right that racism and Islamophobia are real, and that people who hold those bigoted views have been emboldened by President Trump. There have been Trump policies like the Muslim ban that only fueled the notion that there are good immigrants and bad ones, as he states. And yes, way too many people see whiteness as good and blackness as bad, even though they might not admit it. That shouldn't be tolerated. None of it. And I get why Wajahat doesn't want to engage in that conversation any longer.

But I want to defend the idea that we are one country and need to be talking to each other. Canceling 73 million Americans, fellow Americans, the Trump voters, and refusing to find those within that wide swath who might see your point on an issue or three feels like more than a missed opportunity to me. So, let's get out the red pen. 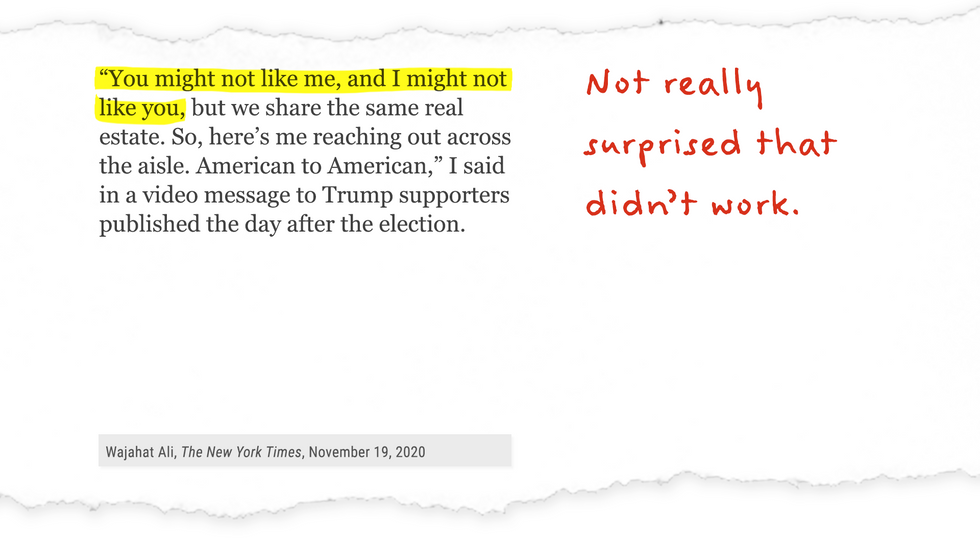 So, I'm starting off with an easy one. As Biden might say, "Come on, man." How do you think Trump supporters felt when you started off by saying you don't like them or assuming they don't like you? I got to tell you, if someone started a conversation with me by saying, "I don't like you," I am not inclined to listen to you for much more. Okay. That's the easy one.

Now let's be more serious. Next, Wajahat describes engaging Trump supporters solely on the issue of race. I warned them that supporting white nationalism and Trump in particular would be self-destructive. Here's the heart of the problem. Wajahat's belief that Trump supporters are irredeemably racist blinds him to the fact that there are other economic, social and cultural concerns that really, really matter. In fact, the top issue for voters in the exit poll was the economy, as it most often is.

Now, I understand the view that by voting for Trump, you've endorsed those uglier elements, including Trump's racism. But there is a lot more nuance in the 40% of the American population that Wajahat is not acknowledging.

He also writes, "The majority of the people of color rejected Trump's cruelty and vulgarity, and that he supports creating a multicultural coalition of the willing, including white Trump supporters." And look, Wajahat is right that a majority of people of color voted for Joe Biden, but Donald Trump earned more votes from people of color in 2020 than he did in 2016, especially among black voters. It's a sign that the GOP's base is shifting, and the conventional lines and the assumptions about politics in America are no longer totally true. There are lots of other factors at play here that the argument does not address. 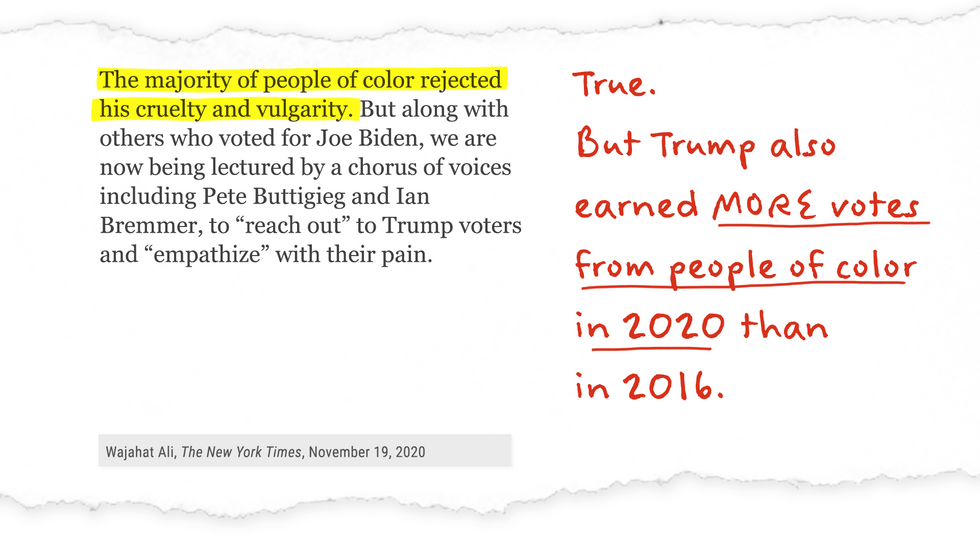 Heck, maybe it's easier for me because I don't usually talk about race when I'm talking to audiences across the political spectrum. I talk about global issues, and that's where things get a lot less black and white. I mean, hey, the 20-year war in Afghanistan failed. Hey, free trade might be great for me in the 1%, but what have you gotten from it? Even immigration, should we be bringing in as many people when labor needs are actually decreasing? These are conversations that you can have across the entire political spectrum that also matter and that engage people, real people. The future of our country also relies on them.

So, I mean, in the same way you say in your family you used to avoid race and sex and politics, maybe going right into the most divisive issue is not the way you start the conversation with people that you're trying to create any sort of bridge with.

Finally, Wajahat writes that he did his part in reaching out to Trump supporters by going on a speaking tour in states where Trump won. And I want to say here that empathy is more than just being paid to deliver a dozen speeches, and it's more than just chatting with your driver. That's an anecdote that Wajahat actually describes. You can't grab Tom Friedman's talking to your drivers stick in the New York Times op-ed. I mean, that's ballsy. But it's about not assuming the worst of people and trying for a moment to put yourself in the shoes of someone who may support Trump's economic or conservative social policies and is tired of being told he's racist by liberals in New York. I assume Wajahat isn't going to agree with my last point, and maybe some of you won't either. But I still argue there's truth in it.

Now, in his final sentences, Wajahat makes an argument I strongly agree with. We should all work to combat misinformation and lies coming from political henchmen and landing onto social media sites. And those sites need to be doing a hell of a lot more to prevent those lies from catching like wildfire. Agreed. But no, I do not believe we should stop talking to people who don't see it our way. And I don't think Joe Biden as president will get very much accomplished if he can't find a way to connect with some of the 73 million people who didn't vote for him.

The main reason to engage with people you disagree with in your own country is they are fellow citizens, regardless of what they believe. And I tell you, if you don't, you can be damn sure that somebody else will. If you want to give 73 million Americans over to the Proud Boys and Steve Bannons of the world, they'll be more than happy to organize them on Facebook.

Exports controls are "worst possible" thing to do in a food crisis, says UN Foundation chief