February 05, 2021
GZERO Staff
The Abraham Accords Are Not at Risk Under Biden | The Red Pen | GZERO Media
youtu.be

In a Washington Post op-ed, commentator Hugh Hewitt states his concern that President Biden will continue his streak of policy reversals in the Middle East, specifically regarding the peace deals that Trump brokered in his final year in office. But in fact, Biden has consistently supported the Abraham Accords, even during the heat of the presidential campaign. Ian Bremmer and Eurasia Group analysts Jeffrey Wright and Sofia Meranto take out the Red Pen to point out that Hewitt may be overreacting to Biden's recent freeze on a fighter jet deal to the UAE.

We're taking our Red Pen to an op-ed from the Washington Post, written by well-known radio host and columnist Hugh Hewitt. It's titled, "The Biden Administration could derail the Abraham Accords. It mustn't."

Hewitt is arguing that one of the most important foreign policy accomplishments of the Trump presidency, no question there, the normalization of diplomatic relations between Israel and the UAE, Bahrain, Sudan and Morocco should not be unraveled by President Biden and his foreign policy team.

Now in fairness, President Biden has spent the bulk of his first few weeks in office undoing many of Trump's policy decisions. Rejoining the Paris Climate Accord for example, and the World Health Organization, ending the Muslim ban, reversing the ban on transgender people joining the military, to name just a few. But does that mean the Abraham Accords are kaput? Not a chance. Let's get out the red pen.

Hewitt hangs the bulk of his evidence on a specific aspect of the deal with the UAE involving the sale of US fighter jets to the Gulf nation. The Biden administration has halted that sale for the moment. And Hewitt writes, "With the announcement last week that the new administration will review a sale of a batch of fighter jets to the UAE, one of the most important diplomatic achievements could be in question."

That's a really big leap. To be clear, we're talking about one specific aspect of the deal, for starters, not the whole enchilada. Let's look at the context. It's not actually unusual for a new administration, either Democrat or Republican, to press pause on arms sales initiated by the previous one. It happens frequently, and those deals usually tend to get approved and eventually move forward. Further, the UAE doesn't seem all too worried. Its US Embassy, which had fantastically close relations with Jared Kushner in the Trump administration, tweeted that the pause was expected, and the nation is looking forward to working with the Biden administration. 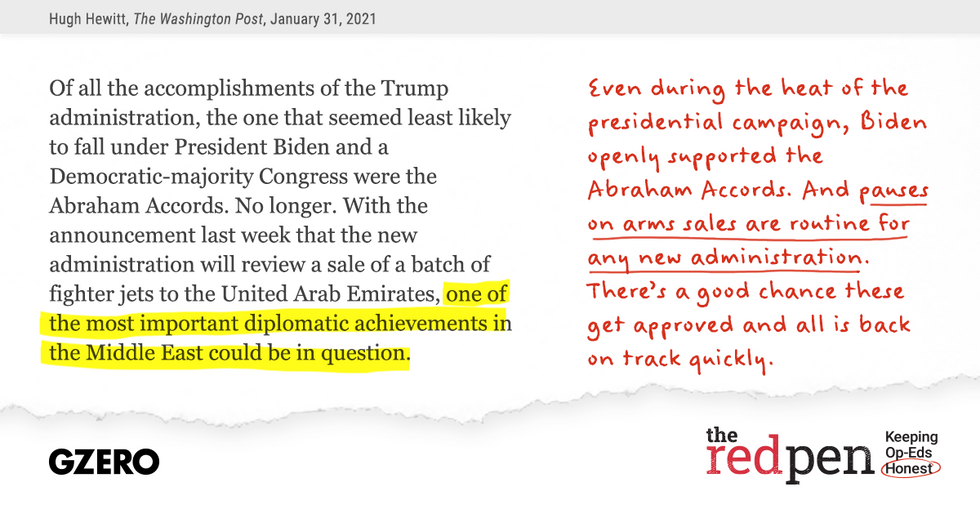 Next, Hewitt argues that the fighter jets are "the crucial glue holding together US interests in the regions" and that the Abraham Accords could unravel without them. The Accord was important because it recognized the reality that Israel and the Gulf States had actually built a productive and quiet relationship, something frankly not appreciated under the previous Obama-Biden administration. The Trump deal didn't actually create that relationship, though it certainly did help it along. Remember, Trumps first trip as president was actually to Saudi Arabia and Israel, very unusual. And the UAE is not about to throw away its relationship with Israel, which it finds strategically very important, much less with the United States it's critical ally, even if the fighter jet sale were to go south. Which again, we don't expect. 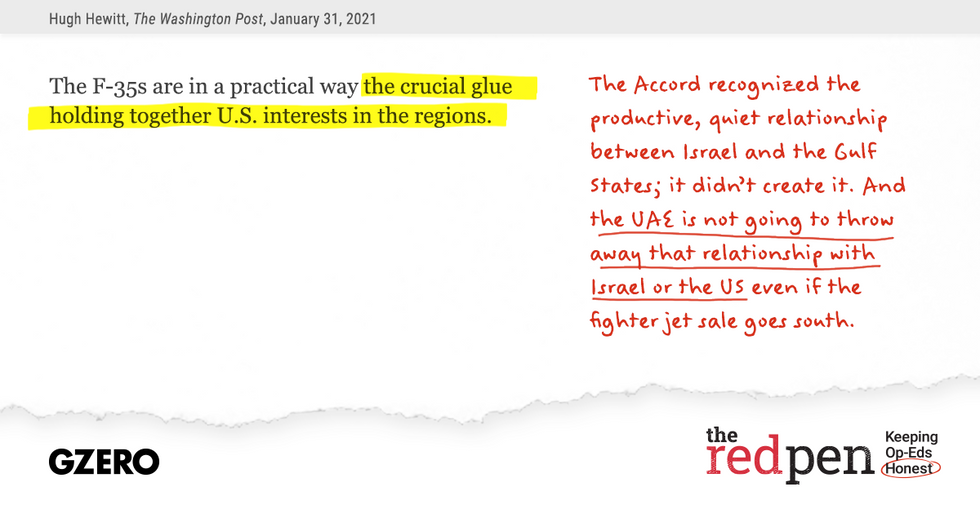 Hewitt also writes, "The Iranians are not happy that the UAE may prove to be our wingman in any future conflict with the mullahs in Tehran." Well, to be fair, the UAE didn't actually sign up to be a "wingman." The US and UAE have differing views about the threat that's posed by Iran. And the Iranians are more concerned about the political alignment against them than they are more fighter jets in the region. 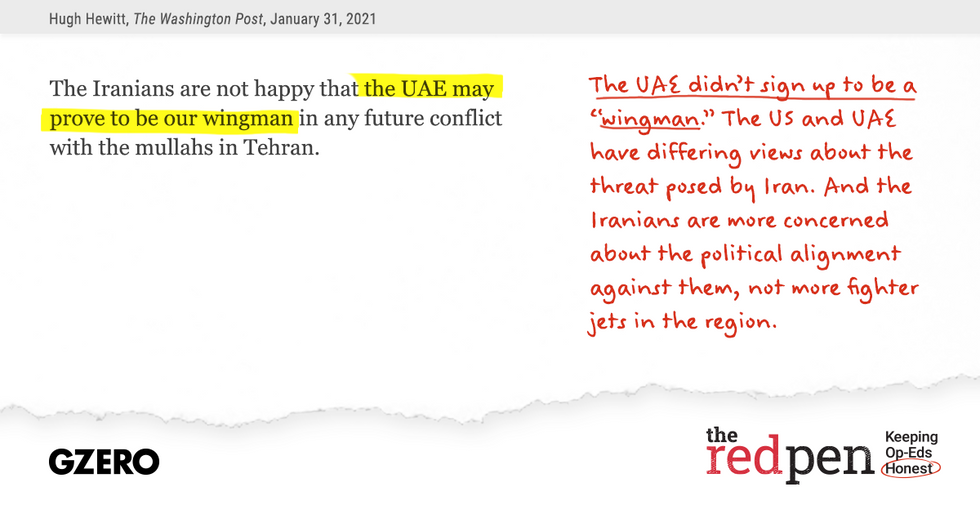 And finally, if you want to have a better sense of where the Biden Administration is heading on this issue, all you have to do is look at what they've already publicly said. During his Senate confirmation hearing, Secretary of State Tony Blinken said the US would keep its embassy in Jerusalem. And National Security Advisor Jake Sullivan described the Abraham Accords as "positive" for both security and the economy in the Middle East. Two big Trump accomplishments that the Biden team is absolutely signed up for. And keep in mind that even at the height of an incredibly heated presidential campaign, Joe Biden himself never denounced the deal. In fact, he actually openly supported it.

So, a great undoing really isn't in the works, at least when it comes to the Abraham Accords. We can expect a different approach to a lot of things in the Middle East from the Biden Administration, in terms of the Iranian Nuclear deal for example, no question. Also, restoring aid to and diplomacy with Palestinians who were not directly engaged in the Trump deal.

But a 180 on the Abraham Accords, that's not happening.

So, that's your Red Pen for this week. Stay safe, stay warm, and watch the Super Bowl, but be sure to avoid people. Talk to you soon.

One of the keys to accelerating financial inclusion and building a more equitable digital economy is to enable minority-owned businesses to scale. And one of the fastest ways to do that is through partnerships with a global network like Visa. At the Visa Economic Empowerment Institute (VEEI), we’re committed to providing research and insights on important issues related to inclusive economic policy. Our reports cover topics like what women-owned businesses need to unlock growth and how to empower Black and Brown-owned banks. Read more of our latest stories here.

For decades, European leaders have debated the question of whether Europe should have a common foreign policy that’s independent of the United States.

Germany, the UK, and countries situated closest to Russia have traditionally preferred to rely on membership in NATO and US military strength to safeguard European security at a cost affordable for them.

French leaders, by contrast, have argued that, with or without NATO, Europe needs an approach to foreign-policy questions that doesn’t depend on alignment, or even agreement, with Washington.

There are those within many EU countries who agree that Europe must speak with a single clear voice if the EU is to promote European values and protect European interests in a world of US, Chinese, and Russian power.

A recent spate of violent crimes in New York City has made national headlines. Since Eric Adams was sworn in four weeks ago as mayor of America’s most populous city, violence on the streets — and the subways — has again become a major political focus. Things got even more heated this week, when two young cops were killed while responding to a domestic dispute in Harlem.

Crime is not only a dominant political issue in New York. It also resonates more broadly with American voters worried over increased lawlessness and unrest. Indeed, crime is already shaping up to be a wedge issue as Republicans vie to win control of the US Congress this November.

100 million: The US Navy is scrambling to find a $100 million F-35 stealth fighter jet that crashed and sank soon after taking off on Monday from an aircraft carrier in the South China Sea. One expert described the Cold War-ish race to locate the remains — stocked with classified equipment — before the Chinese do as "basically The Hunt For Red October meets The Abyss."

Nord Stream 2 used as a bargaining chip with Russia. The US now says that if Russia invades Ukraine, it’ll block the Nord Stream 2 pipeline, which is set to transfer even more natural gas from Russia to Germany under the Baltic Sea. This is a big deal, considering that Germany – thirsty for more Russian gas – has long been pushing for the pipeline to start operating despite ongoing objections from Washington. The $11 billion energy project, which would double Russian gas exports to Germany, is seen as (a big) part of the reason why Berlin is reluctant to push back hard against the Kremlin over its troop buildup at the Ukrainian border. Still, German officials admit Nord Stream 2 could face sanctions if the Russians invade, suggesting that the Americans’ threat was likely coordinated with Berlin in advance. This comes amid ongoing diplomatic attempts to de-escalate the Ukraine crisis, with US President Joe Biden and German Chancellor Olaf Scholz set to meet at the White House on February 7.

Russia's president, she says, has put a “noose” around Ukraine with a troop build-up along the border that could spell invasion in the near term. The US has led an effort to deescalate the situation through diplomacy.

Ever wonder why everything seems to be a major crisis these days? For former Google CEO Eric Schmidt, it's because artificial intelligence has determined that's the only way to get your attention.

What's more, it's driving an addiction cycle among humans that will lead to enormous depression and dissatisfaction.

Angela Merkel is retired — but only from politics. Still, maybe she's not as good at other jobs as she was as German chancellor.

Security flaws in China’s My2022 Olympics app could allow surveillance

Is the West united against Russia? Sort of.