The GOP siding with Trump is hardly a threat to democracy

GZERO Media
The GOP Siding with Trump Is Hardly A Threat to Democracy | The Red Pen | GZERO Media
youtu.be

Columnist Max Boot writes in The Washington Post that by humoring Trump, the GOP is enabling authoritarianism. Ian Bremmer and Eurasia Group's Jon Lieber take out The Red Pen to argue that, while disappointing, the kowtowing is unlikely to damage US democracy.

And today we're taking our Red Pen to an article by Washington Post columnist and author Max Boot. It has the frightening title, "By humoring Trump, the GOP is enabling authoritarianism."

Now, Max's premise is that by kowtowing to a sore loser, GOP leaders are doing irreparable harm to both their party and to our democracy writ large.

I do think there's a lot of disappointing behavior here from Republicans and certainly from President Trump, but I don't think the US democracy will crash and burn because of it. Let's get out the Red Pen.

First, Max writes that, "It was inevitable that if Trump lost the 2020 election that he would allege that he had been cheated of his rightful victory even without any evidence of any cheating." No argument from me there, that is exactly what is happening. But then he goes on with, "What was not inevitable was that the leaders of the Republican Party would support his claims." 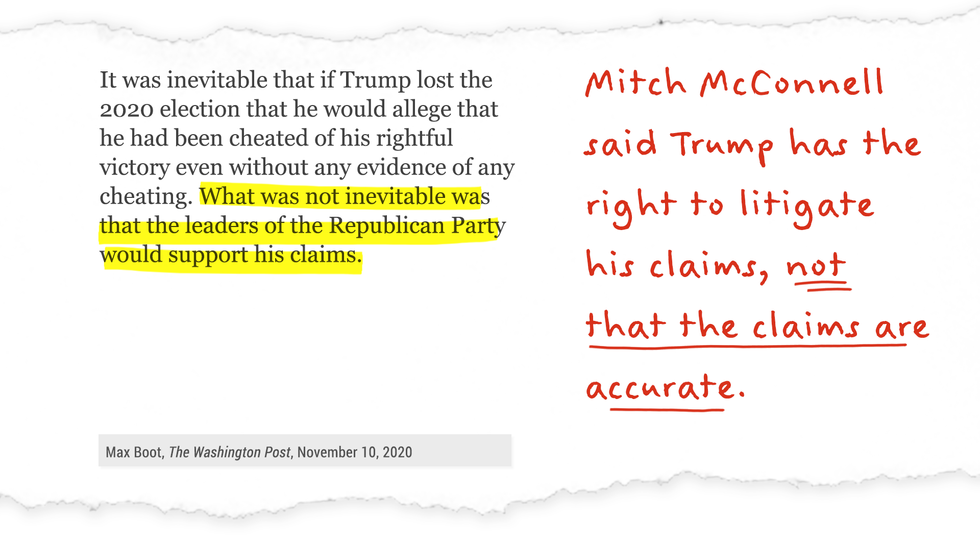 Actually, not so much. All leaders of the GOP are not supporting the claims. In fact, a number of Republican Senators have already called Joe Biden to congratulate him on the winning the presidency. And Senate leader Mitch McConnell is supporting Trump's right to make the claim, which is very different from saying the claim is correct. I'm not justifying why they won't congratulate President-elect Biden. In my view, they all should. But that is very different than Max's argument.

Which brings us to the reason why so many Republicans are taking Trump's side in this losing battle. Max writes that they "keep the charade going because their leader is too much of a 'snowflake' to admit he was just repudiated by more than 76 million Americans." 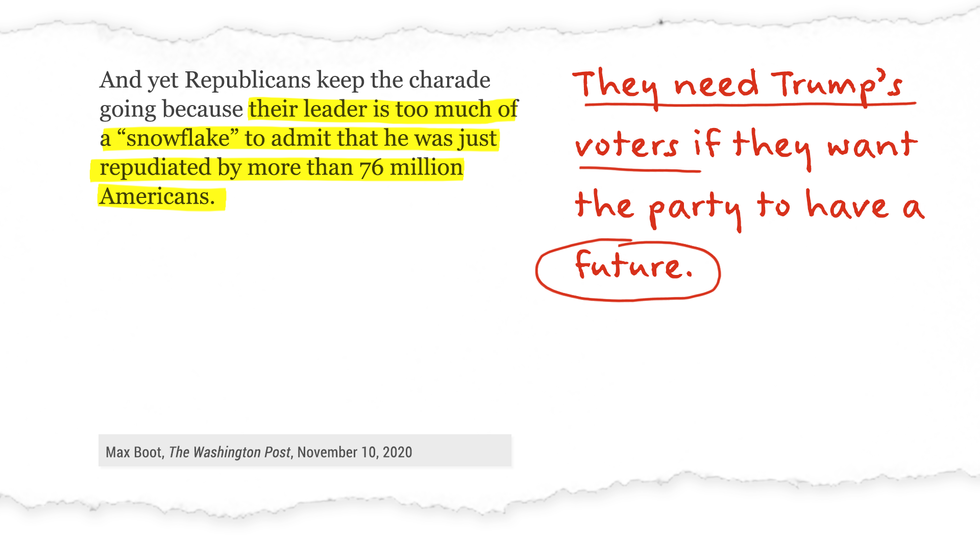 It's not the Republican party's finest moment. I agree. But it's also true the President was himself was endorsed by more than 70 million Americans. He lost. But there are a lot of Trump voters out there. A hell of a lot more than the polls expected. And as long as Trump is around, the Republican Party needs to court those voters to keep their party strong. After all, the balance of the Senate is still up for grabs in Georgia, as they head to a runoff in early January. You think the Republican Party is going to start a war with the President before that election? There's not a chance.

Finally, Max writes, "Many countries have elections. But only in functioning democracies do losers recognize the result and transfer power to the winners." 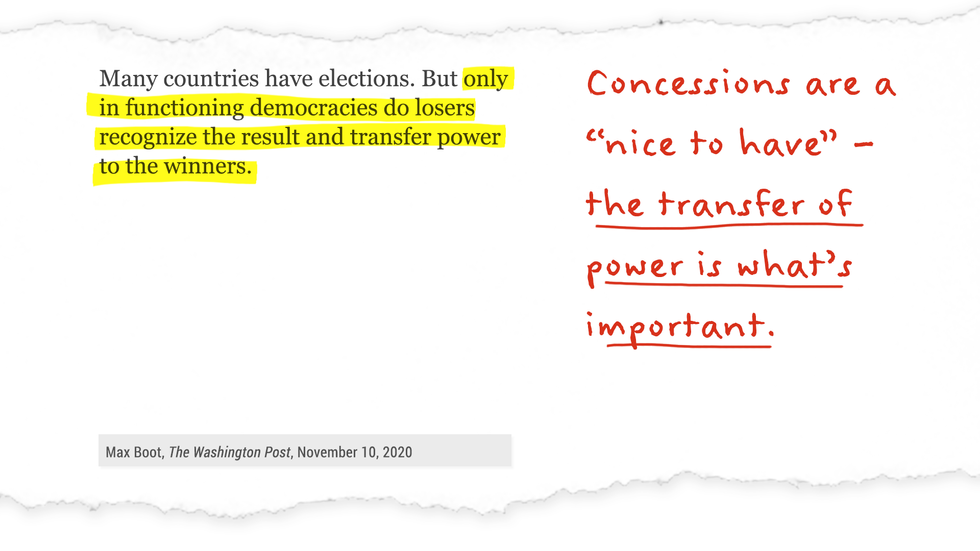 Here's a secret: Concessions are nice. They are appropriate. But they are not necessary. Stacy Abrams lost the Georgia Governorship by 55,000 votes to Brian Kemp, who is now Governor. Stacey never conceded. It didn't matter.

Joe Biden will become president on January 20, you can bank on it. And he's going to even if Trump doesn't wish him well or go gently into the goodnight.

Max does make a big point near the end of the article that we all agree with: a quick concession from Trump is better for national security. He cites the 9/11 Commission report saying the delayed transition after the contentious and drawn out 2000 election made the nation more vulnerable to the terrorist attack that followed.

This is one of many reasons why President Trump should quickly concede and release the funds and resources necessary for the peaceful transition of power to President-elect Biden.

But, no, the fate of our very democracy doesn't hinge on a congratulatory tweet from very soon to be ex-President Donald Trump.

"We're in this together" — UN Foundation chief