The recovery will be a jagged swoosh, not a V-shape

GZERO Media
The Recovery Will Be a Jagged Swoosh, Not a V-Shape | The Red Pen | GZERO Media
youtu.be

British economist Jim O'Neill says the global economy can bounce back right to where it was before, in a V-shaped recovery. But his argument is based on a lot of "ifs," plus comparisons to the 2008 recession and conditions in China and South Korea that may not truly apply. Ian Bremmer and Eurasia Group's Robert Kahn take issue with O'Neill's op-ed, on this edition of The Red Pen.

Today, we're taking our Red Pen to an article titled "A V-Shaped Recovery Could Still Happen." I'm not buying it. It's published recently by Project Syndicate, authored by British economist named Jim O'Neill. Jim O'Neill is very well known. He was chairman of Goldman Sachs Asset Management. He's the guy that coined the acronym BRICS, Brazil, Russia, India, China. So, no slouch. But as you know, we don't agree with everything out there. And this is the case. Brought to you by the letter V. We're taking sharp issue with the idea that recovery from all the economic devastation created by the coronavirus pandemic is going to happen quickly. That after the sharp drop that the world has experienced, everything bounces back to where it was before. That's the V. Economists around the world are debating how quickly recovery will happen to be sure. But we're not buying the V. Here's why. W-H-Y.

First, among his arguments, O'Neill points to stimulus money pouring in from all corners of the globe. He writes, "After all, governments around the world have mustered an absolutely massive economic response, exceeding the amounts even provided during the 2000, 2008-2010 financial crisis." No question. But this is not the 2008 recession. This moment has brought the entire world's supply chain, massive disruption, debt-distress, unlike anything we've seen in our lifetimes. And with the virus very much still exploding around the world and no vaccine for the moment and none really expected that would work and be distributed globally until at best, mid, late next year, we're likely to see a relentlessly stop and start economy that more resembles what we think is a jagged swoosh, then a V. Sure, we've had a good balance after a very steep decline, but all indications are that the hard part is still to come. 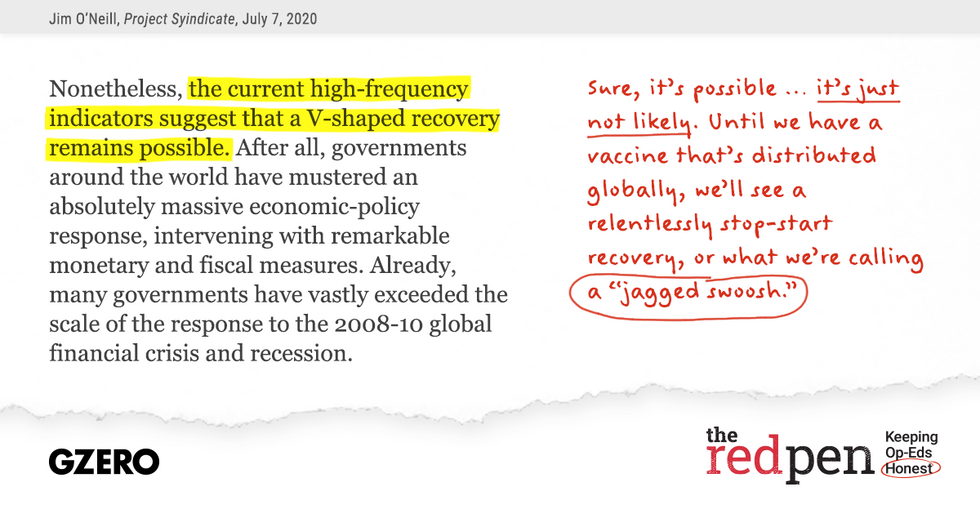 Second, O'Neill writes that improving conditions in China and South Korea bode well for the rest of the world. He writes, "despite China's ongoing challenges, the Caixin services PMI index rose to a 10-year high in June," and he points to increased exports from South Korea, too. Sure, China and South Korea, but they're doing particularly well because they contained the virus. They quarantined. They had contact tracing. They had early testing. That's not true in much of the rest of the world. Certainly not in my own United States, the world's largest economy. Not in Brazil. Not in India. Not in most of the world's emerging markets. A global recovery will not gain momentum while the world is following completely divergent parts. 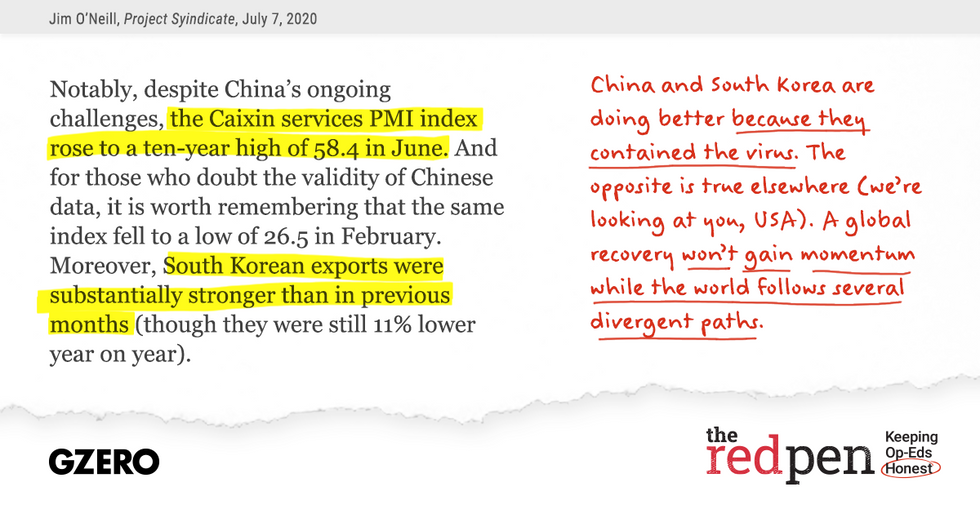 And finally, O'Neill writes, "If lockdowns remain localized and temporary, if health systems continue to expand testing, and especially if a vaccine or more effective treatments are developed, the economic outlook need not be as bleak as many believe." Those are some very big "ifs", my friend. Testing is nowhere close to what it needs to be in the United States and in most of the developing world, aside from China. 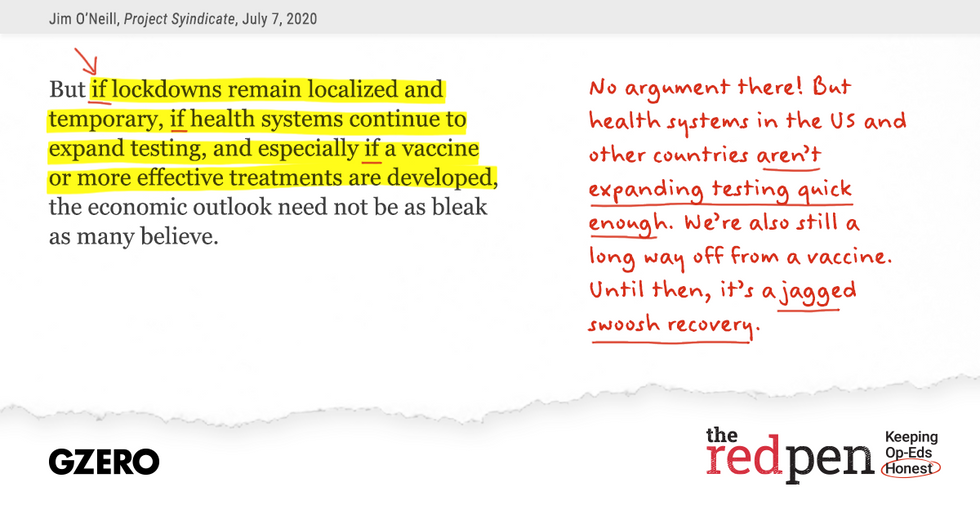 Yes, the United States is testing a lot more than it used to, but nowhere close to the explosion of cases that we have right now. We're still looking for effective treatment options, let alone the vaccine that could potentially take years to develop and distribute globally. And if the first vaccines are not seen as effective, a lot of people are going to wait. They're not going to take them immediately. That's even with good education. That's even, never mind, anti-vaxxer sentiment. And it's not paying attention to vaccine nationalism and the fact that the world is not rowing together in developing a vaccine together, which is what you want to respond to a global pandemic.

In other words, all of this is not pointing to a V. It's this jagged swoosh. It's going to be a lot uglier than we'd like it to be. That's your Red Pen for today.
From Your Site Articles
geopoliticsjim o'neilproject syndicateian bremmerv-shaped recoveryjagged swooshtheredpengzero worldeconomic recoveryeconomic depressioncoronavirusCOVID-19pandemic

How to save our future from the crises we create

Why philanthropic foundations need to spend money (and quickly)