The US COVID response under Trump was not "merely mediocre"

September 09, 2020
GZERO Media
The US COVID Response Under Trump Was Not "Merely Mediocre" | The Red Pen | GZERO Media
youtu.be

An op-ed in the New York Times says that the US coronavirus response under President Trump was mediocre, but not catastrophic, when compared to the response of other countries. But the "peer country" examples selected by columnist Ross Douthat don't paint an accurate picture. Ian Bremmer and Eurasia Group analyst Scott Rosenstein take issue with Douthat's argument in this edition of The Red Pen (where we keep op-eds honest).

Today, we're taking our red pen to a recent piece from New York Times columnist Ross Douthat. The title is provocative, "How Many Lives Would a More Normal President Have Saved?" It sounds like Douthat is about to go big on the failure of President Trump's response to the pandemic. But no, that's just the headline. In reality, what he's saying is it isn't a catastrophe and may end up just being, meh, especially when you compare the US to peer nations. Not so fast, Ross. Let's break down the argument and get out the red pen.

First, how are we defining peer nations? Douthat writes, "It probably makes more sense to compare the United States death toll to similarly positioned and sized countries - meaning the biggest countries in Western Europe and our major neighbors in the Americas - than to compare us to a global average." Why not compare, my view, the United States to the EU rather than individual nations for a similar landmass and population? That makes the most sense. If you did, you'd realize that comparison doesn't paint a pretty picture for the United States. 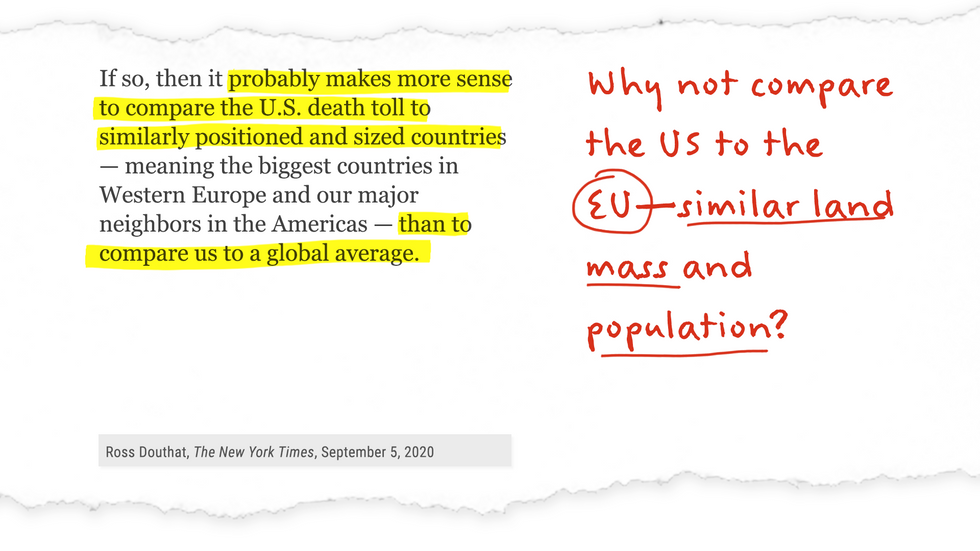 And by the way, if you are going to single out peers, you should also include Canada, Japan, South Korea, all of which have a lot fewer cases and deaths per capita than the United States. Now, to be fair, since publication, Douthat has posted a pretty lengthy thread on Twitter explaining a few of his more controversial points and admitting he should have included Canada as analysis. Fair enough. But in broad terms, comparing the United States to a conveniently selected cohort and ignoring both the different starting points within that comparison and all other counterexamples - like Canada and the EU a whole - seems like you're forcing the argument. Also, the US is far better equipped in terms of federal government resources, pandemic planning, the private sector, and research institutions - the best in the world - than pretty much any other country. So therefore, the extent to which the US underperformed, what should have been our expectations is much greater. Also, keep in mind, the United States population is considerably younger than the European countries that are under comparison, which should have helped minimize deaths and severe illness, since we know that overwhelmingly coronavirus hits older populations.

Next, Douthat focuses on left versus right politics and not anti-science populism versus pro-science pragmatism. That's a lot more important as a split, not left versus right. He writes, "Overall, once you observe the general pattern where the Western Hemisphere and Western Europe have been particularly hard hit, it's hard to distinguish the big countries run by centrists or socialists from the country run by Donald Trump." But when you compare anti-science populists like Trump or AMLO in Mexico, Bolsonaro in Brazil, with Angela Merkel in Germany, or Jacinda Ardern in New Zealand, you see a pattern that suggests that Trump's rhetoric, an unwillingness to demonstrate strong leadership, have done more than a little damage. 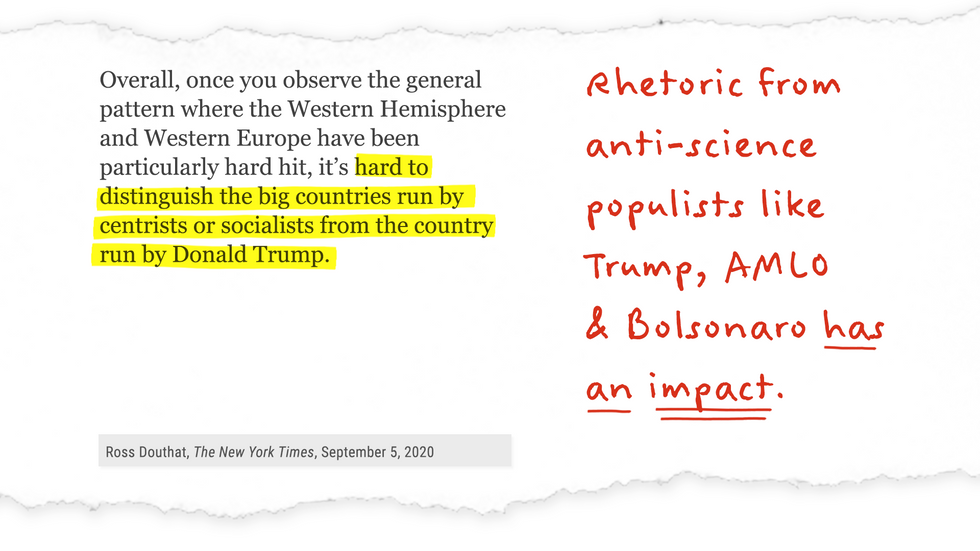 Finally, when we get to the "normal president" part from the title of the column, Douthat writes that the actions necessary to save a hundred thousand or more lives "would probably required presidential greatness, not merely replacement level competence." Really? I mean, do you have to be an exceptional leader like Merkel to listen to public health experts and avoid the politicization of vaccines and treatments?

You don't need to be Winston Churchill to level with people and not intentionally downplay the threat of the pandemic, which is exactly what President Trump told Bob Woodward he was doing. It's all in Woodward's new book, by the way. Speaking of vaccines, Douthat also writes that if one is developed in record time, as Trump is promised, that will also be part of Trump's coronavirus legacy. And absolutely agree. But let's keep in mind that President Trump has also stoked vaccine skepticism since before he was elected and now his actions on coronavirus vaccines are contributing to even more skepticism. So if Operation Warp Speed is successful, it may also succeed in further undermining vaccines for coronavirus and for other illnesses for a long time to come.