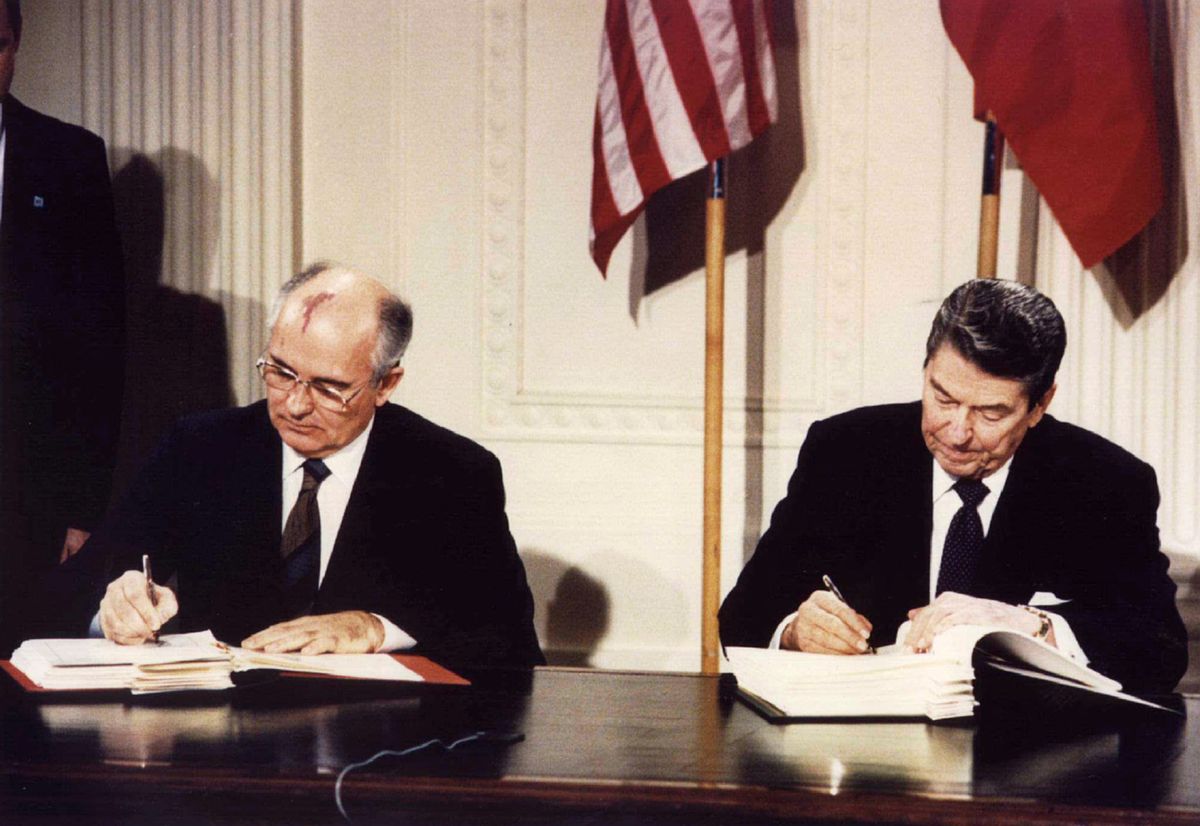 US National Security Adviser John Bolton is in Moscow today, explaining to Russian President Vladimir Putin why the Trump Administration wants to ditch a major arms control treaty that dates from the waning days of the Cold War.

In 1987 – after years of concern about nuclear weapons buildups in and around Europe  – the US and the Soviet Union signed the Intermediate Nuclear Forces treaty (INF), which forbade either country from producing or deploying ground-launched missiles with a range between 300 and 3,300 miles. It eliminated an entire class of dangerous weapons and was a mainstay of US-Russia ties for decades thereafter.

Today, it’s in trouble. For one thing, each side accuses the other of breaking the treaty’s rules. Since 2014, the US has warned that a new Russian missile, the NOVATOR, violates the pact, and NATO allies broadly agree. The Russians, meanwhile, say US missile defense systems and even unmanned drones represent violations.

Further complicating matters, the original agreement doesn’t apply to China, which has in recent years developed a huge arsenal of precisely the intermediate-range weapons that the INF treaty bans. That arsenal worries US allies in Asia, but it also concerns Russia, which shares a 2,600-mile land border with China.

So would leaving the deal be a good move for the US?

If yes, it’s because:

If no, it’s because:

Trump may of course simply be using this walkout threat as negotiating leverage to get the Russians to agree to milder revisions that everyone can live with. It also may scare the daylights out of the Europeans who – as even some of the treaty’s defenders have pointed out – should be doing much more to put pressure on Moscow about INF violations, given how much this issue affects the continent. (The range from 300 to 3,300 miles from Russia’s border encompasses all of Europe.)

It hardly seems likely that Bolton traveled all the way to Moscow just to deliver the final word that the US is out of the treaty. What he is telling Mr. Putin, however, will shed light on whether this is the end of the INF, or the beginning of new negotiations.

Movses Abelian, Under-Secretary-General for General Assembly and Conference Management, acknowledges that this year's gathering of world leaders presents unique challenges. But, he says, the work of the UN continues. For two decades he has had a pivotal role in organizing thousands of key diplomatic meetings during these important weeks in NYC. In this video, Abelian explains the General Assembly, how it has worked in the past, and what to expect this year.

"I'd like to say that the recovery is underway but that it is uncertain, incomplete and uneven." European Central Bank President Christine Lagarde tells Ian Bremmer how 27 EU member states were able to set aside decades-long political grievances in order to act quickly on economic relief for the millions of Europeans hit hard by the pandemic.

The exchange is part of a wide-ranging interview for GZERO World. The episode begins airing nationally in the US on public television Friday, September 25. Check local listings.