“I believe Kyiv will win” – a Ukrainian journalist’s view

For more than three weeks now, Vladimir Putin has tried without success to besiege and conquer Kyiv, the Ukrainian capital. In recent days, the Russian army’s attacks on the city have reportedly intensified, even as Russian and Ukrainian negotiators warily sketch out peace plans.

So far, hundreds of thousands of Kyivans – mostly women and children – have fled the city for safety in western Ukraine or the EU, part of a larger wave of close to 3 million Ukrainian refugees on the move.

But one local journalist decided to stay in Kyiv.

Kristina Berdynskykh is originally from the southern Ukrainian city of Kherson, but she lives in Kyiv, where she writes for NV, a local news site that publishes in Ukrainian, Russian, and English.

The 38-year-old journalist joined us from an underground bomb shelter to tell us what life is like in the city now, how it has changed since the war began, and what she expects as the Russian war machine bears down on her and her fellow Kyivans.

Can you tell us where you are right now, and why?

I’m in a Metro station in one of the residential neighborhoods of Kyiv. Since the beginning of the hostilities, they’ve opened their doors to everyone as bomb shelters, where anyone from Kyiv can take refuge. Early on, there were lots of people in the Metro, but lately there are far fewer because so many, especially women and children, have left either for other cities in Western Ukraine or other countries.

Close to 3 million Ukrainians have already left. Why did you decide to stay?

I thought about it for a long time, and at first, I was unsure whether to leave or stay. But, early on, I saw how the territorial defense units, the Ukrainian government, and the Ukrainian army were acting, and I saw the way the people here were so decisively committed to prevailing. I felt how strongly Kyiv would fight for itself, and I want to be here so that as a journalist I could tell that story. I believe that Kyiv, and all of Ukraine, will win – and I want to be in Kyiv when that happens. 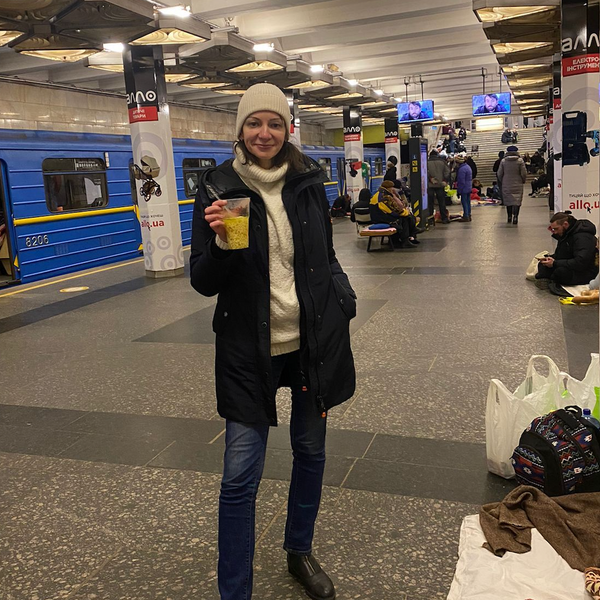 Journalist Kristina Berdynskykh never dreamt she would be sleeping in a Metro station.

Kyiv is unrecognizable. Before the war, it was a totally modern European city with trendy restaurants and spots. A bustling life. But now, many people have left, the streets are empty. You walk around the city and it’s empty. Defenses have popped up everywhere – the barricades and the sandbags – all meant to stop the enemy if they come into Kyiv. So it’s a city awaiting war. It’s like something from a movie. You just can’t believe that this is the same Kyiv that we know and love.

Are there any associations – new smells, new sounds – that you have with this moment in Kyiv?

For one thing, this is probably my 14th or 15th night in the Metro. Never in my life did I imagine that I would be spending every night in a Metro station. That’s one thing. And secondly, yes, Kyiv now lives with the constant wail of air raid sirens and announcements about possible airstrikes. We get these messages probably five times a day minimum, telling us that there is a threat of airstrikes and to run urgently to the bomb shelters. Some people have already stopped paying so much attention to them because if you did, you’d be sitting in a bomb shelter pretty much all day. So we’ve gotten used to the sound of the air raid sirens, unfortunately.

What’s one thing you want outsiders to understand about the situation?

I want to say to the world that this whole war is happening solely because of Putin’s hatred for Ukraine and for the Ukrainian people, and he will stop at nothing until he’s killed and exterminated all of us. So my message to the world is: if there is anything you can do to close the skies and stop the bombs from falling on Ukrainian cities, please do it, because he will stop at nothing.

What would happen if the Russians are able to take Kyiv?

To be honest I can’t imagine this possibility – I’m sure it won’t happen. But if it does, there will be a huge, huge amount of bloodshed. Because there are so many people in Kyiv ready to defend the city to the death – it’s hundreds of thousands of people. So it would be a huge battle, a sea of blood, a sea of death. Kyiv won’t surrender, the people won’t flee, they will defend it until the end.