Should the world be focusing more on adaptation as an answer to the climate crisis? In a recent Wall Street Journal op-ed, Danish author Bjorn Lomborg argues that countries - and the media - are panicking over climate change instead of concentrating on tactics like levees and floodwalls. Ian Bremmer takes out the Red Pen to explain why these solutions are not enough to protect the planet.

COP26 is in the air (that's the UN Climate Conference still underway in Scotland) so feels like a good time to take our red pen to an op-ed that…isn't very green. It's from the Wall Street Journal and written by Danish author and academic Bjorn Lomborg. The title sums it up: "Climate Change Calls for Adaptation, Not Panic."

A little background on Lomborg: He's a prominent critic of the global consensus on climate change and wrote a book called "False Alarm: How Climate Change Panic Costs Us Trillions, Hurts the Poor, and Fails to Fix the Planet." Let's be clear: his views are controversial, but given his platform and this week's focus on climate policy, it's important to address the substance of his claims. So, let's break out the Red Pen!

First, the core of Lomborg's argument is that countries need to spend more time focused on ways to adapt to climate change, instead of trying to change their economies to reduce its effect. He writes, "Adaptation doesn't make the cost of global warming go away entirely, but it does reduce it dramatically."

Nobody disagrees that adaptation is important (anymore—lots of people did when COP started 27 years ago, because they thought it was tantamount of surrender). 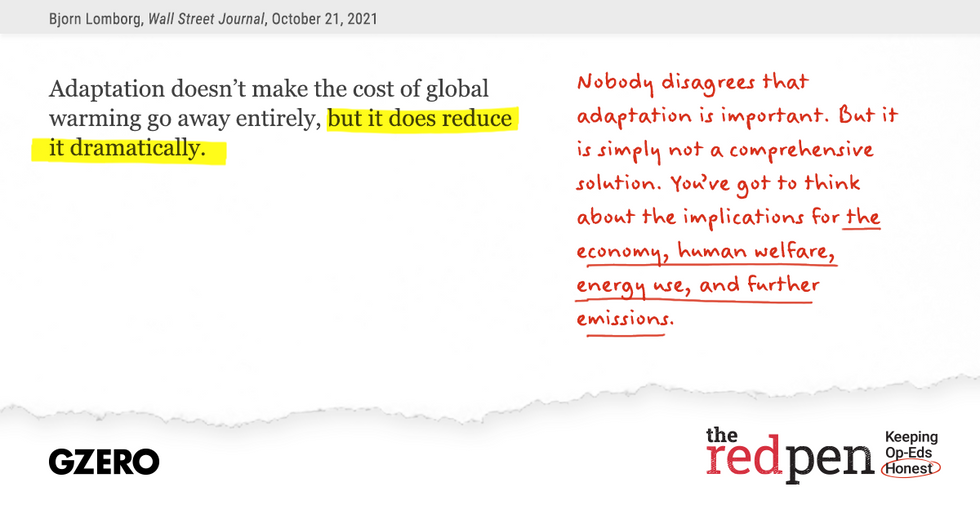 Next, Lomborg suggests that farmers can adapt by shifting production from one place to another, like corn production in North America, which "has shifted away from the Southeast toward the Upper Midwest, where farmers take advantage of longer growing seasons and less-frequent extreme heat."

Moving agricultural production like this works only in big, relatively empty, and fertile countries like the US and Canada. It does not work in highly populated, smaller countries across South and Southeast Asia or Africa, already suffering from shortages of fresh water and arable land. Adaptation alone will not suffice. 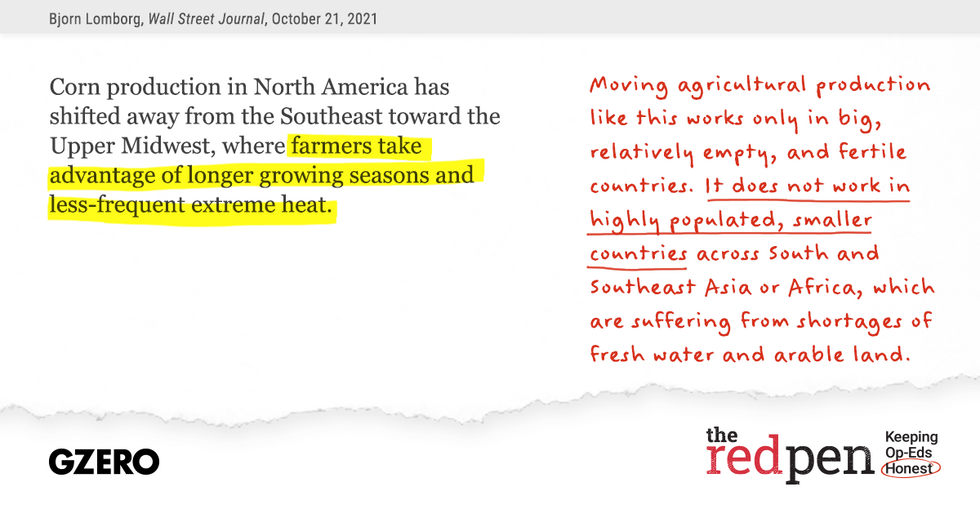 The media is an easy target. When it bleeds (or floods, or burns), it leads. (Except at GZERO, of course). And it's true that everyone is talking about how we've missed 1.5 degrees as a target, nobody mentions that the worst case scenarios of 5 and 6 are also now extremely unlikely—because of steps taken to mitigate emissions. But let's be honest: The people who are doing the real work on climate, and the governments and organizations putting lots of dollar signs behind it, are looking at the whole picture, including adaptation. And they've long since concluded that you can't adapt yourself out of climate change. 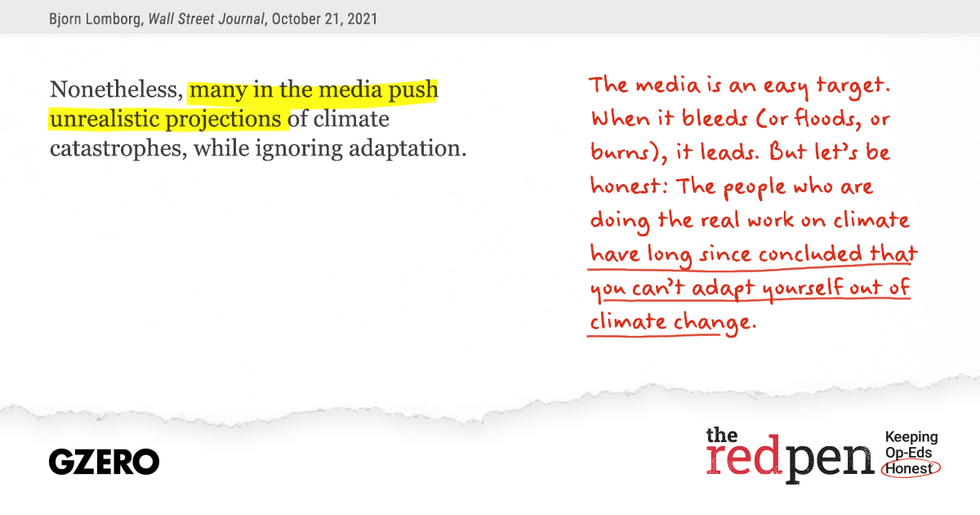 Levees and New Orleans are not usually in the same sentence...in a good way. But setting that aside, building flood walls and drainage systems works regionally, at best. It is no long term defense against rising sea levels, especially in densely populated regions like South and Southeast Asia, where millions of people live on the coasts.

The biggest problem here has been the mass destruction of coastal mangrove forests, which also acted as flood plains. Flood walls and drainage systems won't solve these problems.

Also, you can't build a levee to protect against forest fires, nor will they keep out climate migrants (build the levee sounds even worse than build the wall). And many developing country governments can't afford levees and other adaption at all. 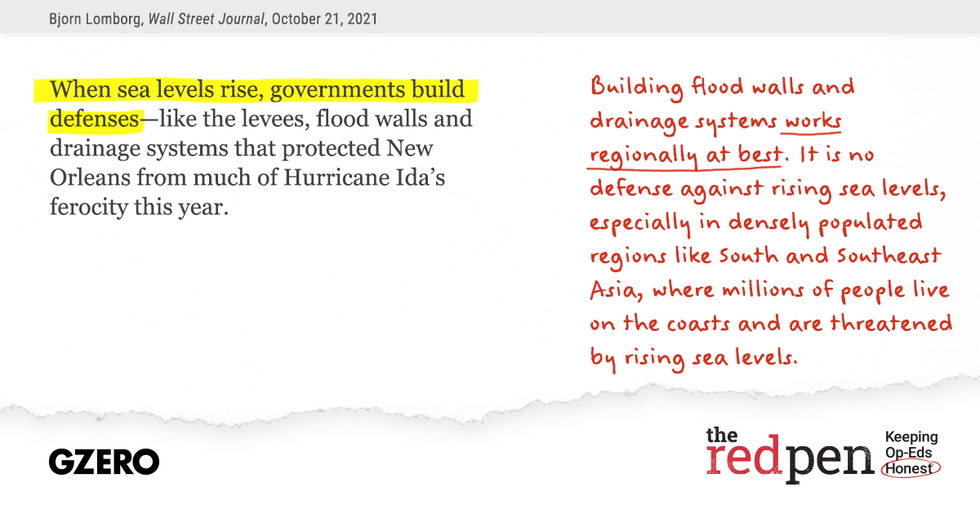 Finally, Lomborg concludes by arguing that "You don't have to portend doom to take climate change seriously. Ignoring the benefits of adaptation may make for better headlines, but it badly misinforms readers."

I agree with this conclusion – we don't need to warn people about a future doom to take climate change seriously. They're seeing it in their lives every single day, whether historically large fires in California or deadly floods in Germany or huge heatwaves in Bangladesh, India, and Pakistan. You know the other thing they're seeing? In a G-Zero world, no one is in charge, and governments and corporations are all moving in different directions, undermining pathways to a solution. That fact may end up scarier than anything Lomborg accuses the media of scheming up. 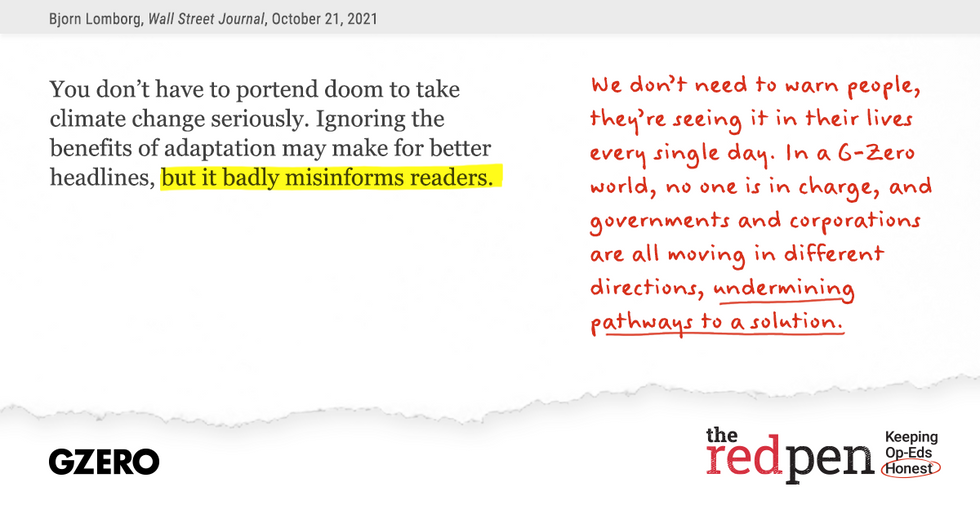 There you have it, that's your Red Pen for this week.

What will it take to rebuild Ukraine?

Why permitting some abortion is smart politics

Putin improves his hand in Ukraine

The promise and peril of Modi’s success