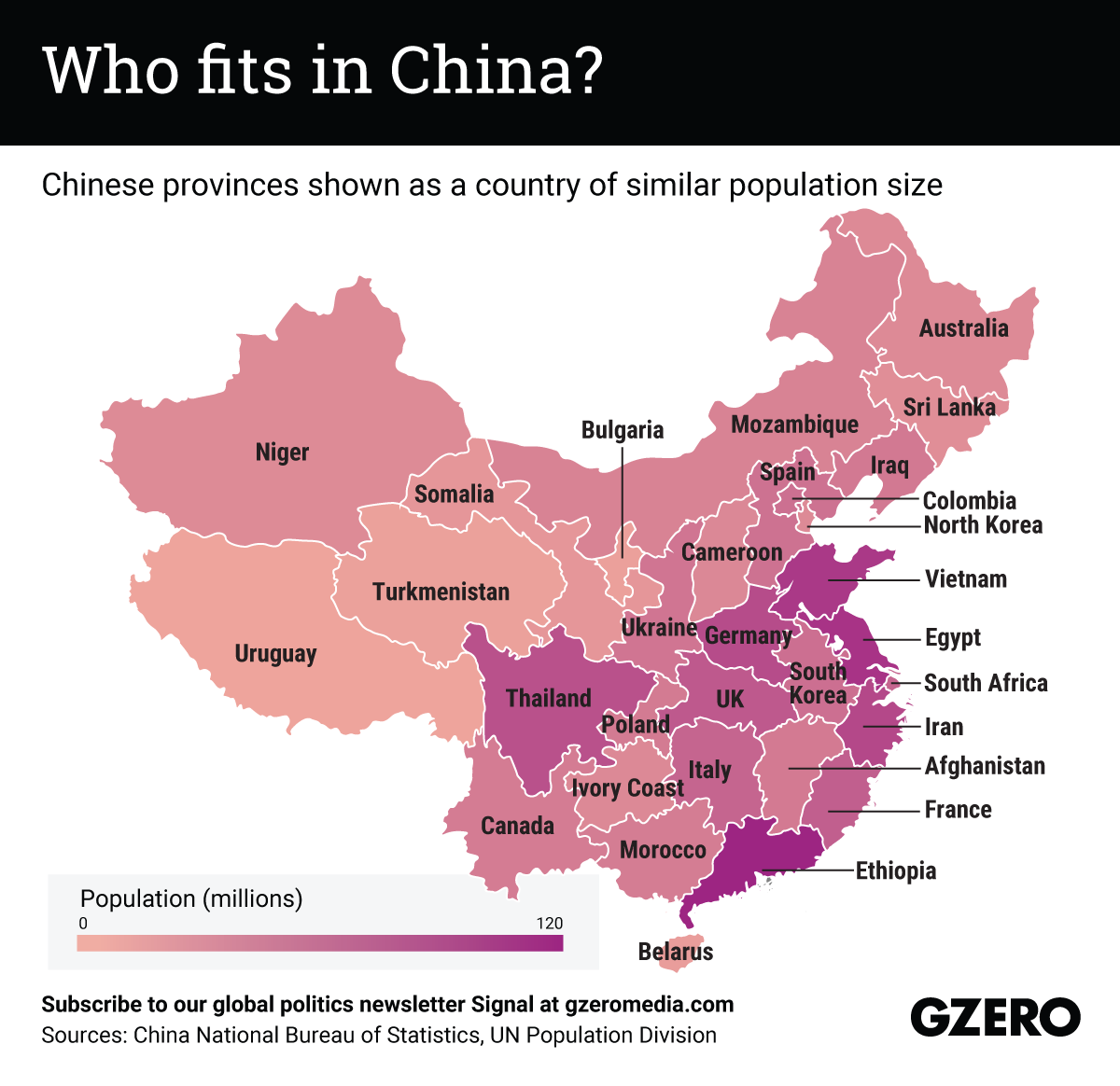 China is the world's most populous country, with a whopping 1.4 billion people. In fact, many individual Chinese provinces would rank among the most populous nations on Earth in their own right. The economic powerhouse of southeastern Guangdong, China's most populous province, is home to as many people as Ethiopia. Up north, Heilongjiang's population is the roughly the same as Australia's. Even the island of Hainan, China's least populous province, is equal in population size to the Eastern European nation of Belarus. Here's a map of China, in which each province is tagged as a country with a similar population size.

Watch live on May 18: Securing Cyberspace

Next Tuesday, join GZERO Media and Microsoft for a live event, Beyond SolarWinds: Securing Cyberspace, exploring cyber challenges facing governments, companies, and citizens. Watch this Munich Security Conference "Road to Munich" event on May 18, 1pm EDT / 10am PDT. Juliette Kayyem, Professor at the Harvard Kennedy School and former Assistant Secretary at the US Department of Homeland Security, will moderate the conversation featuring Microsoft President Brad Smith and other global experts.

Sign up to get email reminders about this and other Global Stage events. On Tuesday, visit gzeromedia.com/globalstage to watch live.

After a year of relative calm, clashes between Israel and Hamas erupted Monday, putting the two sides on the brink of full-blown war.

Flare-ups between the Israeli military and Hamas militants in the Gaza Strip seem to be cyclical. But there are a few developments that make this latest round of tit-for-tat strikes somewhat atypical.

Targeting Israel's hubs. In the past, Hamas and Palestinian Islamic Jihad (PIJ) militants in Gaza have restricted rocket fire mostly to southern Israel. On Monday, however, they upped the ante, firing dozens of rockets into the heart of Jerusalem. In response, Israel's army launched a broad military campaign in the Gaza Strip, killing several Hamas and PIJ commanders.

Then on Tuesday night, in an unprecedented move, Hamas and PIJ fired hundreds of rockets into Tel Aviv and central Israel, sending millions running for cover in bomb shelters, and prompting Israel to shutter its international airport. So far, 43 Palestinians, including 13 children, have been killed in Israeli strikes on the Gaza Strip, while at least six Israelis have been killed and dozens more injured.

Gulf states. This is the biggest Israeli-Palestinian escalation since 2014, when conflict lasted for 50 days. But this time, clashes come just months after Israel has signed normalization agreements with Arab states, including the UAE, Bahrain, Sudan, and Morocco. While the UAE — which has welcomed thousands of Israeli tourists in recent months as a result of normalization — has called on Israel to stop the violence and respect "the Holy al-Aqsa Mosque," for now its government has shown no willingness to play an active role in brokering negotiations.

A test for Biden. Recent events also pose a conundrum for US President Joe Biden, a longtime "friend" of Israel who is also focused on placating the progressive wing of his party, which is more supportive than other US lawmakers of Palestinian rights.

Progressive Democrats like Congresswoman Alexandria Ocasio-Cortez and Senator Elizabeth Warren have called on Biden to intervene in the Israeli-Palestinian crisis, which Biden has made clear isn't a top foreign-policy priority. Moreover, Biden likely doesn't want to do — or say —anything that will provoke the Israelis as his administration tries to revive the Iran nuclear deal, which the Israeli government opposes. But now that the situation is escalating so quickly, Washington may be compelled to get more involved.

Elections matter. Hamas warned last month that it would wreak havoc if the Palestinian Authority (PA), which governs in the West Bank, cancelled this month's parliamentary vote, the first Palestinian elections since 2006. Nonetheless, PA President Mahmoud Abbas, fearing a massive electoral loss to Hamas, proceeded to postpone the vote indefinitely. Hamas is fuming.

This follows mass unrest in Jerusalem in recent weeks. A high-profile court case over the potential eviction of several Palestinian families from East Jerusalem's Sheikh Jarrah neighborhood fueled riots and clashes between Palestinians and Israeli police. Jerusalem-based police courted more trouble when they blocked access to a plaza in Jerusalem's Old City that serves as a town-square for Arab residents during Ramadan. Tensions peaked when Israeli police used heavy-handed tactics to crack down on Palestinians protesting at the Al-Aqsa Mosque compound.

Hamas, casting itself as the real "protector" of Jerusalem to garner political support, used the violence in Jerusalem as a pretext to launch a barrage of rockets into Israel. Hamas does have a solid base of support given that 37 percent of Palestinians said recently that "armed struggle" is the best way to end the occupation, compared to 36 percent who favored negotiations. In striking Jerusalem, "Hamas is trying to embarrass and punish Abbas for cancelling parliamentary polls that it was slated to benefit from," says Moran Stern, an academic at Georgetown University.

Arab-Israeli communities are fired up. For Israel, however, the longer-term danger comes from within its own Arab-Israeli sector, which constitutes approximately 20 percent of the total Israeli population. In recent weeks, Arab communities inside Israel have taken a more active role in protests, which have turned unprecedentedly violent. (A state of emergency has now been declared in the integrated Arab-Jewish city of Lod.) This development startled many politicians who tout co-existence between Israeli Arabs and Jews as a model for broader Israeli-Palestinian peace.

Asked about this development, Moran Stern said: "As tensions rose in Sheikh Jarrah, Hamas has been trying to mobilize Arab communities, especially in East Jerusalem. It also hoped to mobilize supporters in the West Bank, President Abbas's stronghold. It seems the initial plan was to fuel events in those areas while keeping a safe distance so as not to give Israel an excuse to attack its assets in Gaza directly." But Stern notes that as things escalated, this has obviously changed. "The willingness of Hamas and Palestinian Islamic Jihad to escalate by launching massive rocket attacks all the way to Tel Aviv surprised intelligence analysts." Still, Hamas' approach seems to have worked: Arab-Israelis are now angry and activated.

Next steps. Still mired in political chaos, Israel does not have a functioning government to lead the way, while President Abbas has also been missing in action in recent days. Meanwhile, both Israel and Hamas are now upping their rhetoric. The risk of an escalation of deadly violence continues to rise.

What did the DarkSide incident targeting Colonial Pipeline reveal about ransomware and the vulnerability of critical infrastructure?

Well, basically everything you need to know. The type of impact debilitating infrastructure through a ransomware or other method of cyberattack has been warned about for years. The risk of exploitation of vulnerabilities in software with enormous ripple effects became very tangible with the attack on Colonial Pipelines. But remember that energy infrastructure in the US already enjoys the highest protections, and still the attackers managed to perpetrate.

India’s “Darwinian” COVID response: “Indians have been left to fend for themselves”

"It feels like citizens have been left to fend for themselves. It's almost sort of Darwinian. You have a sense of starring in your own worst science fiction survivor movie, where it's up to you if you survive," says Barkha Dutt, an Indian journalist who just lost her father to COVID and has tested positive for the virus herself. A year into the pandemic, India's government has not properly prepared its hospitals and health care workers, forcing desperate families to run from hospital to hospital looking for help, she tells Ian Bremmer in an interview on GZERO World.

China is no stranger to using social media networks to influence public opinion. But as Chinese foreign policy becomes increasingly assertive, they are doing a lot more to win foreign hearts and minds on Facebook and Twitter. A joint investigation by the AP and the Oxford Internet Institute has revealed how Chinese diplomats and state media outlets are coordinating on social media to strategically amplify messages from Beijing — which are then further amplified by an army of fake accounts that Facebook and Twitter keep playing whack-a-mole with. We take a look at China's public diplomacy activity, reach, and engagement on Facebook and Twitter over the span of a few months since mid-2020.

Ian Bremmer shares his perspective on global politics this week:

Why has there been a recent escalation of violence in Jerusalem?

Well, it started with demonstrations of the Palestinians expecting a verdict on these cases of Palestinians that have been pushed out of their homes in East Jerusalem by settlers, contested territory that has belonged to the Palestinians. You've had lots of violence against them by Israeli police, then you had Gaza missiles from Hamas, and then Israeli missiles into Gaza, and now we've got a couple dozen Palestinians dead and the potential for this to get a lot worse is real. The shekel has even moved a little bit because there's concerns that this could lead to a war. It's not a broader war. This is not as much of a priority for the Arabs in the region, so it doesn't kill the Abraham Accords, Iran is still moving ahead with a deal, but in terms of potential for real bloodshed between Israel and the Palestinians, absolutely. That's something to worry about.

A few days ago, cyber criminals hacked into one of the largest oil pipelines in the US, which halted operations after its corporate IT network was knocked offline. If the engineers don't fix the system on their own or the owners cough up the ransom that the hackers are demanding, millions of Americans will soon feel the heat of cybercrime in their daily lives, through higher prices at the gas pump.

Who pulled off this attack, and what does it tell us about the vulnerability of critical infrastructure and the rules (or lack thereof) in cyber conflict today?

Putin orders review of gun laws after school shooting: Details remain sketchy following a shooting at a school in the Russian city of Kazan. At least seven children and one teacher were killed, and a 19-year-old has been arrested, according to local officials. In response to the attack, President Vladimir Putin "gave an order to urgently work out a new provision concerning the types of weapons that can be in civilian hands, taking into account the weapon" used in this shooting, according to a Kremlin spokesman. There's an irony here that extends to the United States, where school shootings are all too common. In 2018, a Russian woman named Maria Butina pleaded guilty to using the National Rifle Association, the gun rights lobbying group, to "establish unofficial lines of communication with Americans having power and influence over American politics." At the time, Putin described Butina's 18-year sentence as an "outrage." The NRA, of course, works hard to prevent Congress and the president from taking precisely the kinds of actions that Putin swiftly ordered following the shooting in Kazan.

Apple vs Facebook, a clash of the tech titans; social media algorithms scrutiny

Netanyahu out of time; Scottish independence; Facebook on Trump ban

India’s “Darwinian” COVID response: “Indians have been left to fend for themselves”