El Salvador's president wins big. What does this mean for the country and its neighbors? 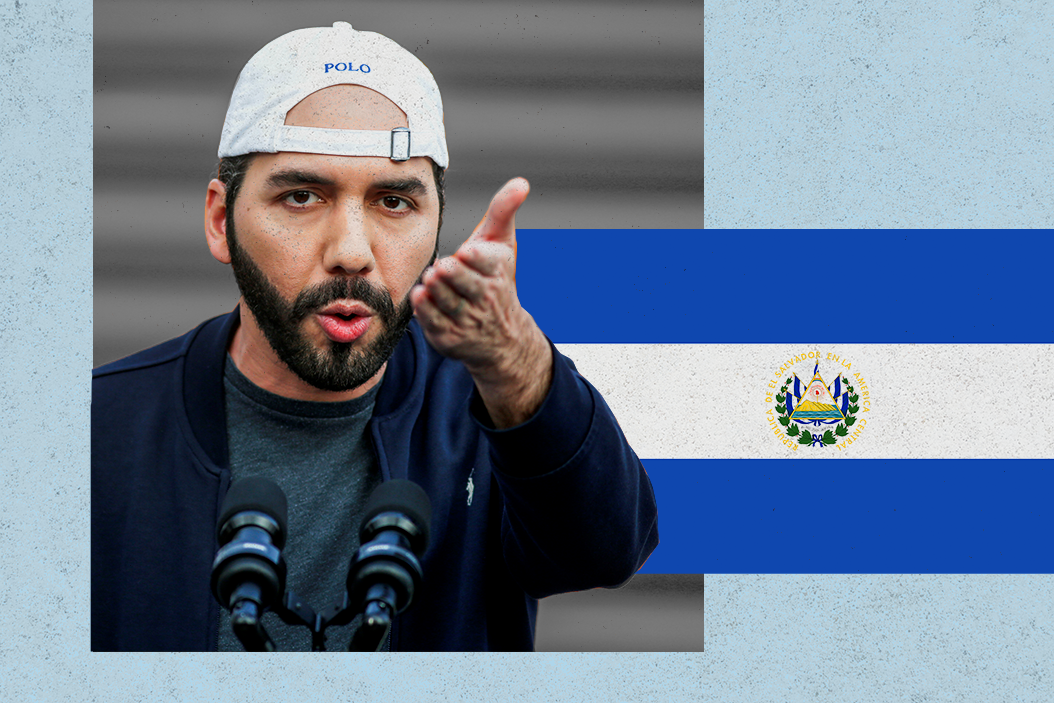 Bukele also enjoys one of the world's highest approval ratings, and that's what helped his New Ideas party clinch a decisive victory in legislative elections on February 28, securing a close to two-third's supermajority (75 percent of the vote had been counted at the time of this writing).

His triumph will resonate far beyond the borders of El Salvador, Central America's smallest country, home to 6.5 million people. Now that Bukele has consolidated power in a big way, here are a few key developments to keep an eye on.

Anti-establishment fervor isn't disappearing. The recent election demonstrates that Salvadorians are buying what Bukele is selling even if he doesn't always deliver on his promises.

In 2019, Bukele came to power pledging to root out corruption, break the monopoly of the two parties that have run the country since the end of the civil war in 1992, and rid the country of violent gangs (El Salvador has one of the world's highest crime rates). Despite a dip early in the pandemic, crime has risen at various stages since — though Bukele has harshly cracked down on gang violence. Meanwhile, investigations reveal that Bukele's administration has been mired in its own corruption scandals. Still, a majority of Salvadorians (roughly 90 percent) see Bukele as preferable to a corrupt political establishment that has long lined its own pockets while poverty plagues around 30 percent of the population. People simply want change.

And this trend isn't unique to El Salvador either. In nearby Mexico, populist President Andrés Manuel López Obrador, known as AMLO, also has failed to make good on some reform pledges that brought him to power in 2018. Still, polls show that Mexicans are overwhelmingly rooting for AMLO — a rugged self-described "man of the people" — in upcoming midterm elections, over a self-enriching political class that they feel has left them behind.

Like in Mexico, there are concerns about El Salvador's authoritarian drift. Last year, Bukele sent troops into the parliament to demand the legislative body approve his security package. "Bukele's style of governing is bullying," said Carlos Dada, founder of the newsite El Faro.

And now that Bukele has a supermajority, analysts warn that he can go even further, claiming a mandate to pack the Supreme Court, reconfigure the attorney general's office, and could even push for a new constitution, scrapping provisions that would cap his current presidency at one-term (consecutive terms are banned). Critics are worried that in placing his allies in control of all levers of government, Bukele can now effectively undermine all judicial and legislative independence.

Why does this matter beyond El Salvador? Political instability in El Salvador breeds regional insecurity and more migration.

People from the so-called "Northern Triangle'' of El Salvador, Guatemala and Honduras have for years constituted the largest share of migrants stopped at the southwestern US border. If an increasingly-authoritarian Bukele is unable to make good on his promises and improve Salvadorians' lives (New Ideas' success is so far rooted in Bukele's own self-styled image rather than a fixed political ideology) this could result in thousands fleeing in search of a better life in the United States, just as President Biden is trying to diplomatically tweak US foreign policy towards Latin America. The Biden administration recently axed the Trump administration's third country resettlement program (also known as the Remain in Mexico program), while still towing a tough line on what it calls "irregular migration." This complicates things for Biden who needs to work with the Salvadorians to manage the immigration issue, but who also can't be seen to be playing nice with norm-breaking Bukele after putting human rights and democracy at the heart of US foreign policy.

For Mexico, meanwhile, the stakes are also extremely high. The spillover effects of drug trafficking and gang violence in El Salvador create insecurity and havoc in Mexico (and vice versa). This dynamic intensified under the Trump administration's zero tolerance policy, when Mexico City experienced a surge in asylum applications from El Salvador. (Consider that in 2019, Mexico received around 80,000 asylum applications because many Central Americans did not want to risk being rejected at the US border and being sent back to their home countries.)

Looking ahead. The very online Bukele represents a new brand of politician sweeping parts of Latin America — and the globe. But in the year 2021, what happens in El Salvador very much does not stay in El Salvador. Mexico, the United States, and many others, are watching.

Can carbon dioxide be captured?

Carbon dioxide's high concentration in our atmosphere is responsible for the climate change that threatens our planet. But what if there were methods for capturing CO2 to store or reuse it?

Demography is destiny. That ominous-sounding pronouncement, credited to French philosopher Auguste Comte, is today taken to mean that a nation's fate depends on the youthfulness of its population. For a poor country to become rich, it needs lots of young people ready to work, to support those too old or too young to work, and to pay taxes. This is called the "demographic dividend."

That's an important part of China's success story. Over the past 40 years, more than one billion people have emerged from poverty in China. Waves of young people surged from the countryside into cities to work in factories. The state invested in education, and wages helped young workers, and then their children, go to school. The state also began a drive to develop the technologies of the future, by any means necessary. In China, once dirt-poor, hundreds of millions have created a middle class.

Do we spend too much time thinking about our own carbon footprints and not enough time thinking about bigger factors? Climate journalist Elizabeth Kolbert acknowledges it's necessary for individuals to make changes in the way they live, but that isn't the number one priority.

"What would you do to try to move this battleship in a new direction? It requires public policy levers. And it requires … some pretty serious legislation." Ian Bremmer spoke with Kolbert, an award-winning journalist and author and staff writer at The New Yorker, on a new episode of GZERO World, airing on US public television.

Watch the episode: Can We Fix the Planet the Same Way We Broke It?

"Next 9/11 is on Biden’s watch”: Rep. Mike Waltz on US leaving Afghanistan

Not everyone thinks that President Biden's decision to pull all US troops out of Afghanistan by 9/11/21 is a good idea. Conservative Congressman Mike Waltz (R-FL), a combat-decorated Green Beret with multiple tours in Afghanistan, thinks that the US still needs to maintain a small presence in the country to avoid incurring "massive risks." In a spirited discussion with Ian Bremmer on GZERO World, Waltz, who served as counterterrorism advisor in the George W. Bush administration, argues, "The next 9/11, the next Pulse Night Club, which is right on the edge of my congressional district, the next San Bernardino, that's now on Biden's watch. He owns it with this decision." Their conversation is featured in the upcoming episode of GZERO World, which airs on US public television starting Friday, April 23. Check local listings.

Would you get rid of COVID-19 vaccine patents?

Vaccines are the best hope to end the COVID-19 pandemic. But rich countries are hogging most of the doses, with more than 83 percent of shots administered to date having gone to residents in high- and upper-middle-income countries. Most poor countries will have to wait years to achieve widespread vaccination, according to one study.

To address this inequity some stakeholders are pushing hard for waivers to intellectual-property (IP) rights through World Trade Organization trade rules so that manufacturers in poorer countries can make their own vaccines locally. India and South Africa have been leading the charge, which would essentially mean that deep-pocketed pharma companies like New York-based Pfizer, for instance, would have to hand over the keys to the kingdom, allowing local companies in New Delhi and Johannesberg to make generic versions of their vaccines.

Unsurprisingly, the debate has gotten fiery, with passionate arguments emerging both for and against.

Russia will withdraw forces from Ukraine but Putin reveals nothing

What are the Russians up to against Ukraine?

We simply don't know, except the fact that they're concentrating a huge amount of military forces. And you don't do that for nothing or for fun. They are there for a purpose, to have pressure or to undertake limited to larger operations. We simply don't know. And when Putin delivered his State of the Union speech the other day, he didn't say a thing about this. They are now talking about withdrawing the forces. But let's wait and see. They have talked about withdrawing forces from Syria for a long time, but we haven't seen that as of yet.

Australia rips up Belt & Road deal: Australia cancelled two 2018 deals signed between Victoria, Australia's wealthiest state, and the Chinese government, that committed the two sides to working together on initiatives under China's Belt and Road infrastructure development program. Foreign Minister Marise Payne said that the agreements "were adverse to our foreign relations." Similar deals between Victoria and institutions in Iran and Syria were also abandoned by the Australian government this week, under a 2020 law that allows Canberra to nullify international agreements struck at local and state level. (Australian universities say the "foreign veto bill" amounts to "significant overreach.") Meanwhile, Beijing hit back, calling the move "unreasonable and provocative," and accusing Canberra of further stoking divisions after a series of escalatory moves by both sides that have seen China-Australia relations deteriorate to their worst point in decades. Chinese investment in Australia dropped by 62 percent last year, a massive blow for Australia's export-reliant economy.

50: The US will aim to cut its greenhouse gas emissions by 50 percent from 2005 levels by the end of the decade. The Biden administration's commitment, double the goal set by Barack Obama almost six years ago, was announced to coincide with a virtual Earth Day climate summit attended by dozens of world leaders.

Xi Jinping expects China to be treated as equal of US

"Next 9/11 is on Biden’s watch”: Rep. Mike Waltz on US leaving Afghanistan

Would you get rid of COVID-19 vaccine patents?

Russia will withdraw forces from Ukraine but Putin reveals nothing

Is it the Greens' moment in Europe?