Tense calm in the Eastern Mediterranean

"We didn't start this," Greek Prime Minister Kyriakos Mitsotakis recently told GZERO Media about his country's heated dispute with Turkey over who controls what waters in the Eastern Mediterranean. Days later, both sides agreed to a NATO-led plan to cool things down, including a hotline to avoid incidents that could lead to armed conflict.

So, what have Greeks and Turks been bickering about all summer, and why does this quarrel between historical enemies — who are NATO allies – put the EU in a terrible spot?

The latest beef between Greece and Turkey is about who controls the energy-rich seabed off the island nation of Cyprus.

Like Greece, Cyprus is a member of the European Union, and the majority of its population is Greek Cypriot. But the northern third of the island, inhabited mostly by ethnic Turks, is controlled by a pro-Turkish administration recognized only by Ankara, which keeps thousands of troops there. The Turkish Republic of Northern Cyprus has granted Turkish energy firms licenses to start offshore drilling for oil and natural gas — which the Greeks and the official Cypriot government view as illegitimate.

The fracas escalated over the summer, when Turkey sent a maritime research vessel (escorted, in a show of force, by Turkish warships) to the disputed waters. Greece responded by calling for EU sanctions against Turkey, while France fanned the flames by backing Greece and offering military support. As the rhetoric got hotter, Turkey's decision to turn Istanbul's Hagia Sophia into a mosque made things worse, and for a short time it looked like both sides might actually go to war. A German-led diplomatic effort got them to back off for a bit, but the threat of EU sanctions still looms for Turkey. 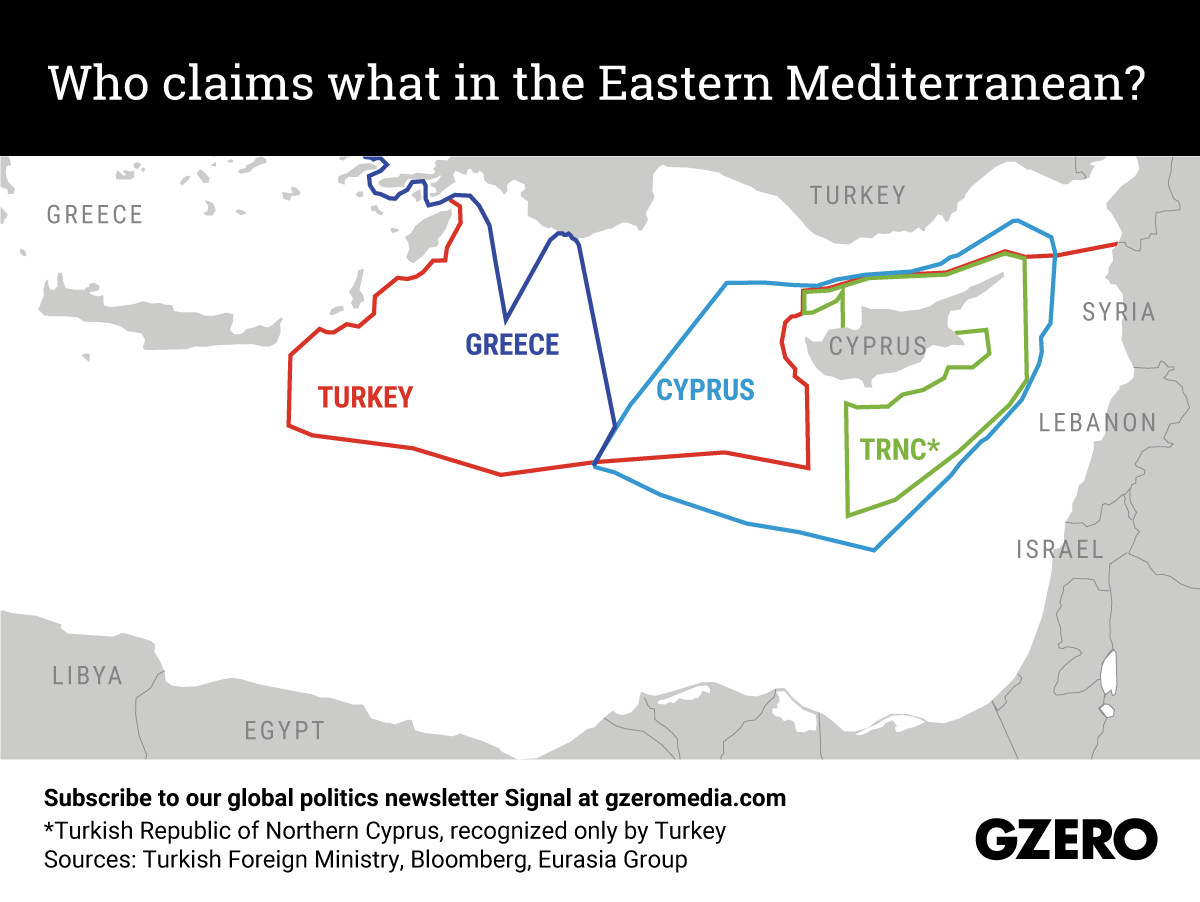 International law is on the side of Athens. Under the UN Convention of the Law of the Sea (UNCLOS), Greece is entitled to claim exclusive economic zones (EEZs) extending out from the coastline of its many islands in the disputed area, like Kastellorizo which lies right off the Turkish coast. Cyprus has made the same legal argument to sign EEZ agreements with non-EU members Egypt, Lebanon, and Israel.

Turkey — which has not signed UNCLOS — rejects the Greek and Cypriot EEZs because they overlap with areas claimed by Turkey or its allies.

Why does Turkey care so much? First, Ankara is keen to curb its dependence on Caspian Sea natural gas from suppliers like Azerbaijan, which is inching close to its own war with Armenia. Second, President Recep Tayyip Erdoğan would benefit from a surge in Turkish nationalism to boost his approval ratings at a time when the economy has been hit hard by COVID-19.

Third, the more emboldened Erdoğan becomes in his increasingly aggresive push for Turkey to project military power beyond its shores, the more this dispute may start to look like China's quest to dominate the South China Sea.

Finally, the EU is in a bind. On the one hand, Brussels must defend the territorial waters of two EU member states. On the other hand, it cannot afford to antagonize Turkey because Ankara has leverage over the EU's migration policy — especially after a recent fire at the bloc's largest refugee camp left thousands of migrants with nowhere to go. What will Brussels do?

The fight with Iran is growing

As Asia’s richest man falters, will his ties to Modi hurt the PM?

Global economy headed to a recession