While Brazilian President Jair Bolsonaro's handling of the health crisis stands out as one of the worst among key political leaders around the world. is his response the main reason that Brazil isn't further along in its vaccination rollout, as Vanessa Barbara argues in an opinion piece for The New York Times? Ian Bremmer and Eurasia Group analysts Chris Garman and Marcelo Alvarenga take out the Red Pen to explain why the causes for delay are much more nuanced and in fact, Brazil has many advantages it can use to make its vaccine program a success.

Today we're focusing on an op-ed recently published in The New York Times, of all places, from contributing opinion writer Vanessa Barbara. She writes regularly about politics and life in Brazil, and that's what this piece is about. Specifically, vaccine rollout and why, in her opinion, it's been a big mess for Brazil and for President Jair Bolsonaro.

Now, without a doubt, Brazil has been one of the hardest hit countries in the world with this pandemic. More than a quarter-million deaths to date. Life getting worse right now, not better in Brazil. The most in the world, deaths, after the United States. Some 80% of all ICU beds are right now, filled at capacity in a majority of Brazil's states. And I have been highly critical of Bolsonaro's response overall, inflammatory comments, blatant disregard for public health protocols, his overt politicization of the crisis, one of the worst things you can possibly do. And just this week, a year into the pandemic, he yet again slammed the use of face masks. All horrible stuff. That kind of behavior definitely helped to create a bigger disaster in Brazil. I'd say the same by the way for Donald Trump in the United States and Mexico's President Lopez Obrador, keeping score.

But Barbara argues that Brazil, with its robust universal healthcare system and long history of successful immunization programs, should have been in a much better place to handle vaccine production and distribution in this pandemic, and lays the blame squarely at Bolsonaro's feet.

We think it's actually more nuanced than that, and that the vaccine story in Brazil isn't nearly as bad as this article would have you believe.

First, Barbara writes that Brazil's vaccine rollout "has been painfully slow, inconsistent and marred by shortages," and that the vaccination campaign's "current rate will take more than four years to complete."

Let's take a step back. Rollout in Brazil has been slower than in the United States, the United Kingdom or Israel, to be sure, the best in the world. But compared to other emerging markets like Argentina, Mexico, even Russia, it's doing quite well. In fact, with the exception of Chile, Brazil has the highest per capita vaccination rate in Latin America right now. She also faults Bolsonaro for not beginning the vaccination campaign until mid-January, weeks after some other nations started. That's not fair. There wasn't a vaccine approved for use in Brazil until January 17th, the day before shots started going into arms in that country. I'd also remind you the European Union, hell of a lot wealthier than Brazil, has struggled with its own delays in getting vaccine approved for emergency use. 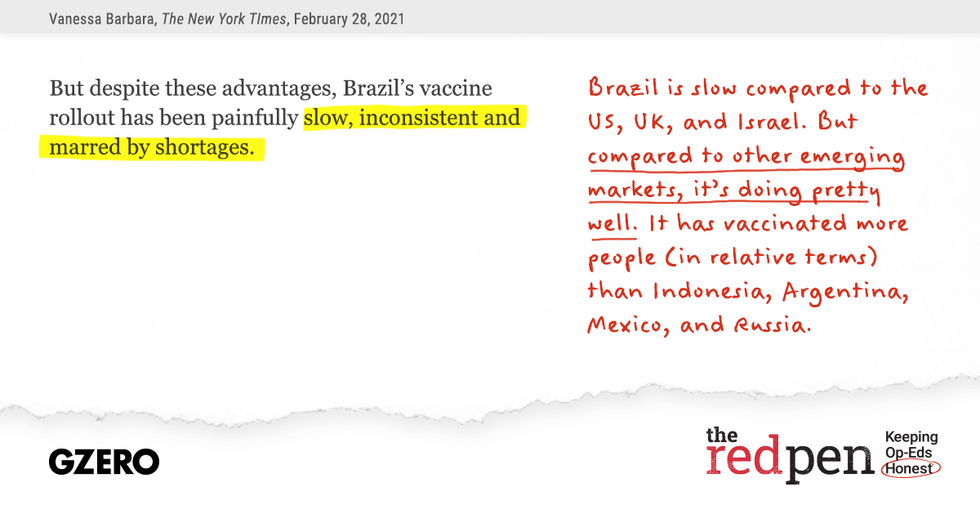 Next, let's look at Barbara's point that Brazil "has a distinguished track record of vaccinations and disease control" which makes this particular rollout all the more upsetting.

Thankfully Brazil's experience at large-scale immunization campaigns and the infrastructure of its public health system haven't been washed away by President Bolsonaro's missteps. It actually means that Brazil is now in a position to ramp up production and distribution, taking advantage of that existing health care system. Brazil has 38,000 permanent vaccination stations and that will be expanded for coronavirus response. Fiocruz and the Butantan Institute, the main local providers of Covid-19 vaccines, are also the main suppliers of regular vaccines for the country's National Immunization Program, which just builds on any already existing network ranging from production to distribution.

Now to that point on manufacturing: Barbara writes that "Brazil is now gradually expanding local production…But everything is happening in slow motion."

The beginning of Brazil's rollout did suffer from disruptions, and some of it falls squarely on mistakes and lack of planning on the part of Bolsonaro's administration. The administration was slow to secure multiple suppliers of the vaccine, hasn't yet struck an agreement with Pfizer. But delays in the ability to secure supply and delays in exports of active ingredients for local production of vaccines was not in any way particular to Brazil. The outlook for local production right now has improved considerably as supplies arrive for both Covishield (that's the Oxford-AstraZeneca vaccine) and the Chinese vaccine Coronavac.

All of these things put Brazil in a far better position than many of its peers globally. So, did Bolsonaro mess up and play politics with the pandemic in general? Yes, absolutely. Does that mean the hopes of a successful vaccine program in Brazil are dashed moving forward, and it is looking worse than its peers? Nope, not at all. And it's nice to be able to say something positive when so many other things are going badly in the country.

That's your Red Pen for this week. There's light at the end of the tunnel in Brazil and globally, but for now continue to stay safe and avoid people.

From Your Site Articles

The crisis we need