Mitt Romney isn't the future of the GOP. He's the past.

February 12, 2021
GZERO Staff
Mitt Romney Isn’t the Future of the GOP. He’s the Past | The Red Pen | GZERO Media
youtu.be

In this edition of The Red Pen, we take a look at an editorial by the FT's Janan Ganesh, who argues that Mitt Romney represents a future for US conservatism post-Trump and is in a unique position to turn around the Republican Party. Ian Bremmer and Eurasia Group's Jon Lieber point out that the GOP is actually moving in a very different direction.

Today we're taking our red pen to an op-ed published in the Financial Times, the Pinks, written by Janan Ganesh, the newspaper's chief US political commentator.

And it's titled, "Mitt Romney is the model for a new Republican party," and argues that the Utah Senator and former presidential candidate is an example of how the GOP should approach the post-Trump political world.

Now, Ganesh is a sharp observer of US politics, but we think this one misses the mark. Let me explain.

The op-ed is framed in the context of Trump's second impeachment trial, and whether Republican Senators should stand for their collective good or vote to acquit for political protection. Of course, the last few days have all focused on Trump's actions and behavior after the November election and his role in inciting the insurrection we witnessed at the Capitol on January 6th. But it also has implications for the 2024 election, 2022 midterms, and what happens to the GOP in the interim.

So let's get out the Red Pen and dive into Ganesh's arguments.

First, he writes that "if there is a future for US conservatism beyond hot-tempered quackery, Romney points the way." He adds that while Romney himself is nearing the end of his career, he can "serve as the model for whoever does one day redeem the party."

Romney is not the future of the GOP. He (and his ideas) are the embodiment of the past of a party that's actually getting Trumpier and Trumpier. And it's important to note that while he has taken stands against President Trump, one of few Republicans in Congress to loudly do so, he also represents a state, Utah, where Trump underperformed in both 2016 and 2020 relative to other red states, and relative to other Republicans over the years. But in the totality of the GOP, Romney is an outlier, he's increasingly becoming his own island. And in general, we question how many Never Trumpers or Lincoln Project folks will even be Republicans in five years. 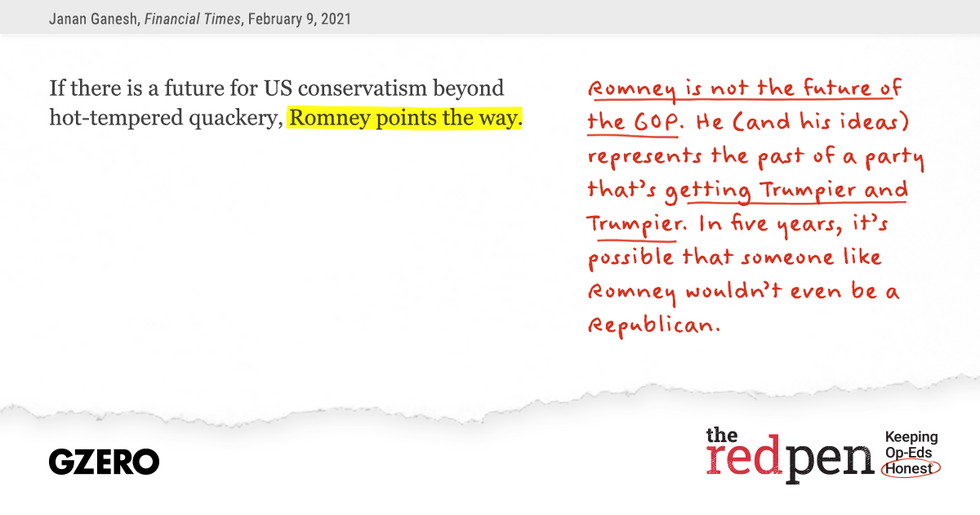 Next, Ganesh writes that Romney is an "agent for change" and that, if it wasn't for his age, he would be the perfect person to turn around the party.

Here's the thing, the GOP doesn't think it needs a turnaround. Trump almost won re-election in the midst of a global pandemic (that he seriously, even epically, mismanaged). Republicans may take back the House next year, and maybe even the Senate. GOP donors, voters, and the base support the way the party is going. Ganesh is offering a potential cure for patients who don't believe they're sick and didn't come seeking a diagnosis.

Ganesh also writes that Romney "questions the small-government bias of a party that has let its economic views become articles of faith," and cites his "break with Republican convention."

Are we talking about the same Mitt Romney? Romney supports tax cuts, he opposes the ACA, and is the lead sponsor of the only budget amendment that is meant to deal with debts and deficits and reforming entitlements. There is one exception, and it's important, Romney's plan for generous reforms to family tax credits. And to be sure, it's admirable that Senator Romney is proposing it, but these ideas have been kicked around for years, including by George W. Bush. It's not the future of the GOP, it's a flashback to "compassionate conservatism."

Finally, to return to impeachment, Ganesh argues "it is in the collective interest of sensible Republicans in that chamber to convict the former president over last month's Capitol siege."

Really? How is it in the collective interest of the party to break from and condemn its most popular member? Even if they bar him from running again, Trump is not going to simply fade away. He lost the 2020 election by plenty. But he also won 74 million votes across this nation. That's enough political mojo to be a big voice in the Republican party or to bring millions of people into a new one. 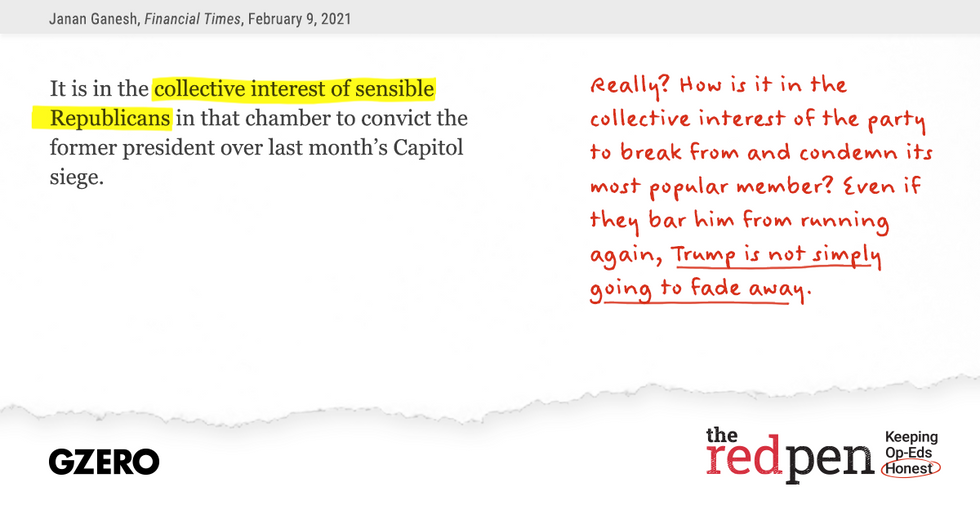 The promise and peril of Modi’s success

US Supreme Court fights: why ending Roe is only the beginning