GZERO Staff
Putin's Next Move Won't Be A Baltic Invasion That Could Unify NATO | The Red Pen | GZERO Media
youtu.be

Russian President Vladimir Putin needs a way to boost his popularity at home, but is he likely to launch a military campaign targeting the Baltic states, as Russian studies expert Leon Aron argues in a recent Politico op-ed? Ian Bremmer and Eurasia Group analysts Alex Brideau and Zachary Witlin take out the Red Pen to break down why a Baltic invasion is unlikely to be on Putin's agenda.

Today we're taking a look at a recent op-ed from Politico, penned by Russian studies scholar Leon Aron of AEI.

And the title asks a provocative question, "Could Putin launch another invasion?" Aron links the current political moment in Russia, big protests, struggling economy, and Putin's own thirst for power and popularity, with the factors that led to Russia's incursion into Ukraine and annexation of Crimea in 2014. He lays out the possibility that Russia could make military moves yet again, potentially against Estonia, Latvia, or Lithuania, the three Baltic states that all happen to be members of both the European Union and NATO.

Some context: This has been quite a week for US/Russia relations. President Biden in an interview with ABC News agreed with an assertion that Vladimir Putin is a "killer," I think he called him "soulless," too. And Russia responded by recalling their ambassador to the United States. All this comes as the American intelligence community released a report this week claiming that Russia had launched yet another campaign in the 2020 election to undermine Biden.

So a logical question would be: What is Putin's next move? Could he wage yet another military campaign?

Now, as with many of the pieces that we look at, some points Aron makes are right on the money. Yes, Putin did gain a lot of popularity after the operation in Crimea, especially. And yes, NATO faces real issues; Turkey is barely an ally these days, countries are slow rolling in terms of spending cash that they're promised, the French are talking about strategic autonomy, and yes, Putin always seems to have a surprise or two up his sleeve. But we are completely not convinced by the argument that an invasion of the Balts may be on its way.

So let's take out the Red Pen.

Sure, the Crimea intervention "worked" for Putin. Until it didn't. Putin has had to downplay military involvement in Ukraine of late to avoid a backlash from a Russian public that cares primarily about domestic issues still, like pensions, for example. And let's not forget that getting involved in Libya, in Syria, even in Nagorno-Karabakh didn't yield any real popularity bump of note for Putin. 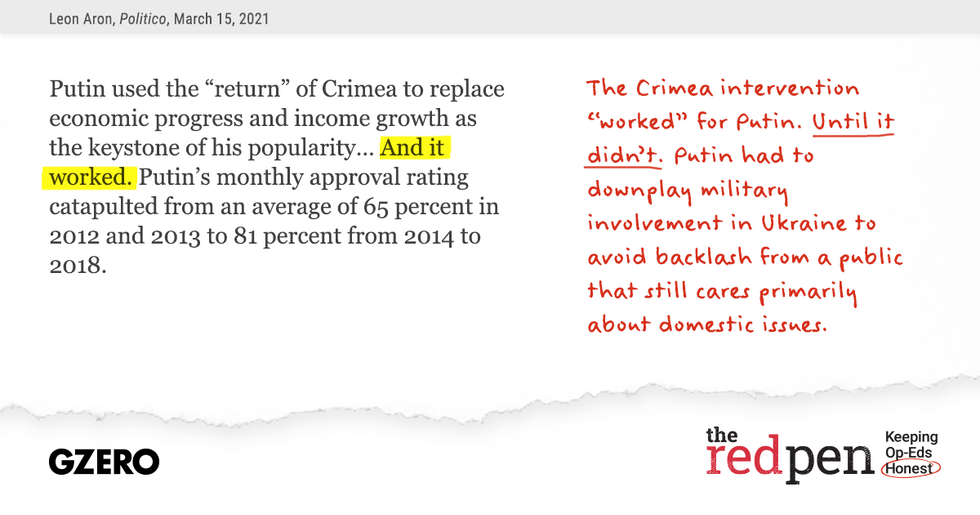 Next, Aron writes that "we tend to repeat what worked." That is, Putin reached for the military lever before when he faced trouble, so he might do so again.

Well, Putin's decision making doesn't occur in a vacuum. Every past intervention was driven by national interest and foreign policy goals. Does Putin care about Putin? Of course. But Putin can't be sure that cooking up a foreign war would help matters it home. In fact, it might actually make them worse. 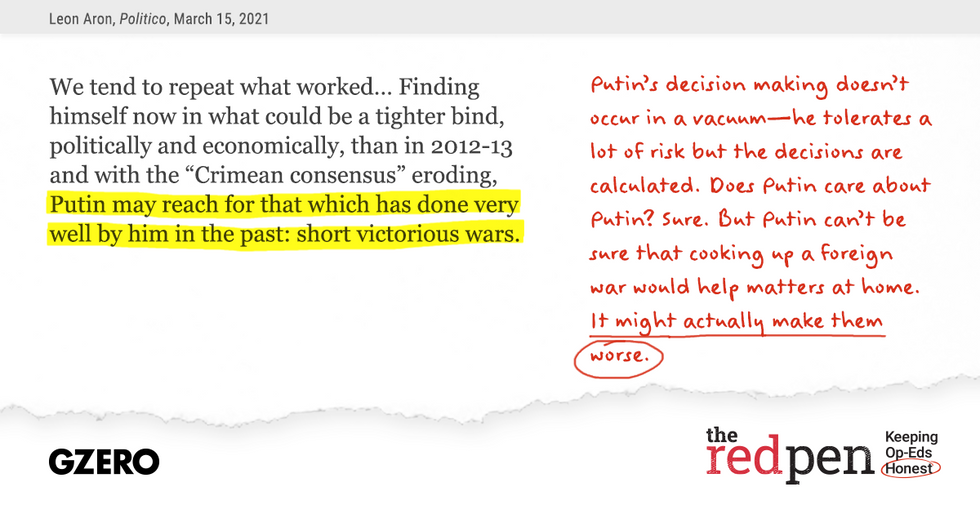 Finally, Aron says that Putin may consider a "fast and victorious poke at NATO's eastern flank," targeting the Baltic states and breaking NATO.

An attack on the Balts may be fast or it may be victorious, but probably not both. And Putin knows this. Western leaders are conflicted about the alliance, but an assault on full-fledged NATO State and EU members is exactly the kind of provocation that could awaken it. Putin understands this. He hardly wants to bring the alliance together as it's eroding. Low-cost efforts to steadily undermine legitimacy and grabbing targets of opportunity when available, that is much more Putin's speed. 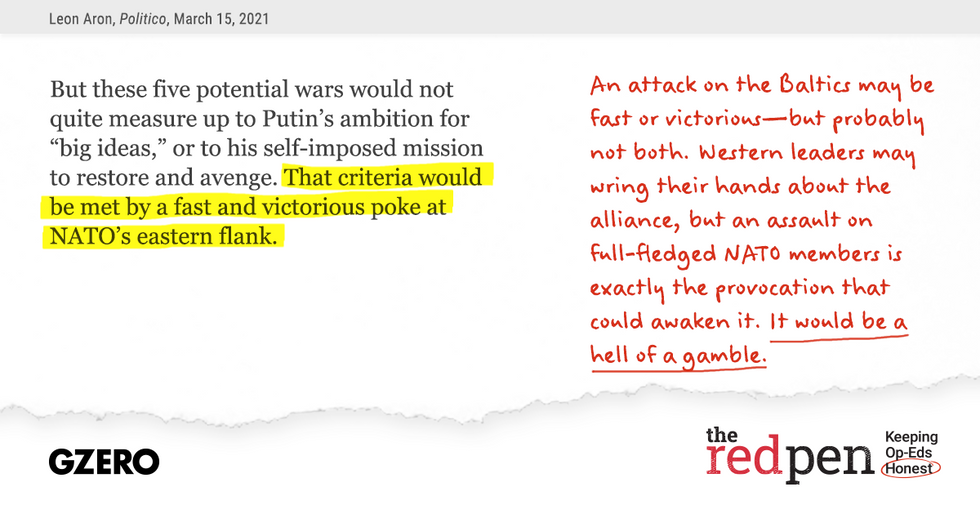 Putin certainly seems to want to be president for life and probably is going to end up running for a fifth term, though a lot can happen in three years. Military moves that diminish his popularity or lead to further widespread protest, never mind bring together his adversaries, that is a strong NYET for now tovarishchey.