The cover story of The Economist declares that Taiwan is "The most dangerous place on Earth," because China might finally be ready to plan an invasion of the island. But are the consequences of such a move worth the many risks to China and its President Xi Jinping? Ian Bremmer breaks out the Red Pen to to explain why a US-China war over Taiwan is unlikely.

We are taking our red pen to a recent article from The Economist. The Economist, you ask, how could I? I love The Economist, I know, I know. But you'd lose respect if I give this piece a pass. In fact, it was the magazine's cover story this week, so I had no choice. The image and headline say it all. Here it is, Taiwan is now "the most dangerous place on earth" as US/China relations continue to sour in the opening months of President Biden's administration.

And it is true, of course, that the relationship between the two most powerful countries in the world, the US and China, is very rocky indeed. Back in March, a meeting between the US Secretary of State Tony Blinken and National Security Advisor Jake Sullivan and their counterparts from China got off to an icy start, in Anchorage, Alaska no less. The Biden administration has declared that China's treatment of Muslim minorities constitutes "genocide" and also continues to push back on the unilateral erosion from Beijing of Hong Kong's autonomy. So, this is not a good relationship.

Of all the issues, the most volatile and explosive could well be Taiwan. The Economist argues that China may finally look to capture the small island democracy.

And yes, there is a lot to be concerned about, but The Economist doesn't have it quite right.

First, a central point in the magazine's argument is that a Chinese attack on Taiwan would have global economic repercussions, including disrupting the world's most important semiconductor manufacturer, TSMC, that's Taiwan Semiconductor Manufacturing Company. That company makes more than half of all of the chips outsourced by all foreign companies globally. A quote from the piece: "Were production at TSMC to stop, so would the global electronics industry, at incalculable cost." 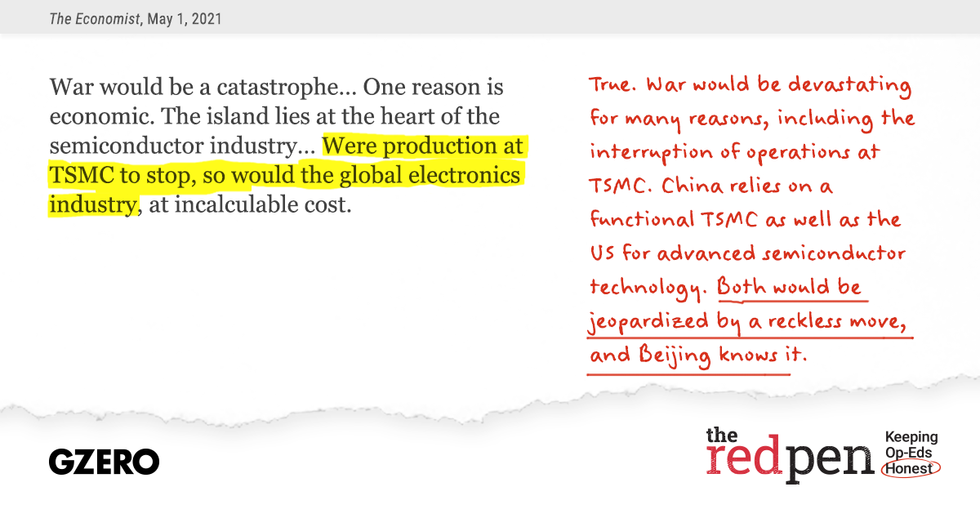 And yes, war would be devastating for many reasons, including the interruption of TSMC's operations. But that's precisely why it's not going to happen. China relies on a functional TSMC as much as the United States does for advanced semiconductors. In fact, China right now is way behind the US in this particular aspect, though not all, of the technology battle. Taiwan is a critical player in the great decoupling battle and an attack would seriously set back China's own tech ambitions.

The article also states that "China would overnight become the dominant power in Asia" if China attacked Taiwan and the United States didn't intervene. 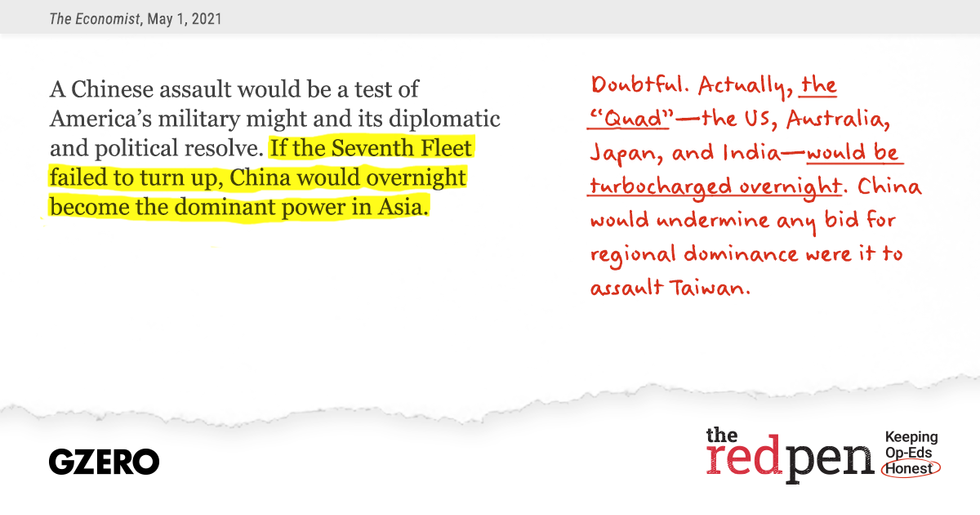 That's doubtful. Actually, the "Quad," the US, Australia, India, and Japan, would be turbocharged overnight. China could completely undermine its own bid for regional dominance if it were to suddenly assault Taiwan. Also, the argument fails to acknowledge that Taiwan itself could mount significant military resistance, exposing weaknesses in Beijing's military power. Not to mention any such attack by China would further damage its ties to the European Union.

Finally, The Economist speculates that China's President Xi Jinping may want to "crown his legacy" as they say, with the takeover of Taiwan. 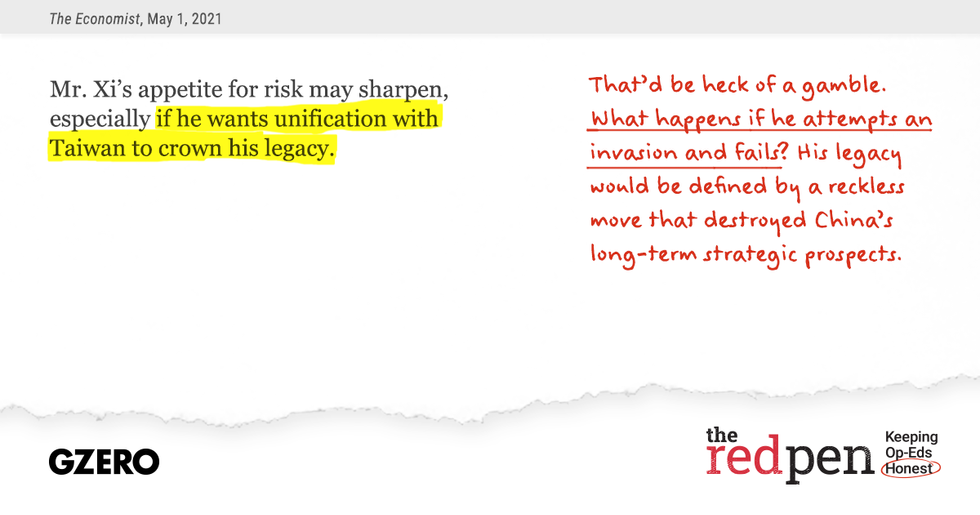 That is a huge gamble. What happens if Xi attempts an invasion and fails? His legacy would be defined by a reckless move that would destroy China's long-term strategic prospects.

Which brings us back to that very splashy and provocative cover and headline. Is Taiwan really "the most dangerous place on earth?" No. Or at least, not right now.

We've laid out a few of the reasons, but here a couple more: The Winter Olympics in Beijing, already super controversial as human rights groups call for boycotts based on abuses of Uighurs, Tibetans, and actions in Hong Kong. Beijing wants to avoid boycotts as much as possible, they see themselves as quite vulnerable in the upcoming Winter Olympics and attacking Taiwan would make matters far worse.

Also, President Xi is looking to secure a third term next fall. Remember, he ended term limits. A military attack on Taiwan could weaken China's standing if it fails. Xi's not likely to go there.

Still, there are other ways for China to assert greater control. For example, the very fear of a looming threat would likely erode Taiwan's quest for independence over time without any shots fired. How do the United States, the Quad, and Europe respond to that? The answer to that question is going to tell us a lot about where the GZERO world is heading.

Walmart is paying 100% of college tuition for eligible associates

Since 2018, the Live Better U program has helped prepare more than 52,000 associates for careers at Walmart or wherever their professional ambitions take them. Now, Walmart will pay 100% of college tuition and books for eligible associates. This means approximately 1.5M associates can earn college degrees or learn trade skills without the burden of education debt. Learn more.

Afghanistan has now become what the UN is labeling the planet’s worst humanitarian disaster. Indeed, last week the world body issued its largest-ever donor appeal for a single country to battle the worsening crisis there, caused by freezing temperatures, frozen assets, and the cold reception the Taliban have received from the international community since they took over last summer.

Governments around the world are offering creative incentives for getting a jab.

If you happen to live in New York and are one of the city’s 18% of unvaccinated residents, now might be a good time to go get jabbed. But not just because of omicron.

In late December, now former NYC Mayor Bill De Blasio announced the city would start offering gift cards, free roller coaster rides on Coney Island and trips to the Statue of Liberty to those who get their shots. And it’s not just the Big Apple.

As infections jump, vaccination incentive programs have been brought back around the world. Officials in vaccine-hesitant Missouri have earmarked $11 million dollars for gift cards worth $100. Vermont is awarding schools with per-pupil bonuses if they hit rates higher than 85%.

China's mounting problems. Xi Jinping is not off to a good start in 2022. First, Chinese economic growth slowed down to 4 percent in the last quarter of 2021, almost a percentage point less than the previous period. While annual GDP was up 8.1 percent year-on-year, beating government expectations, the trend is worrying for the world’s second-largest economy. Second, annual population growth fell in 2021 to its lowest rate since 1949, when the ruling Communist Party took over. Although Xi probably saw this one coming, he's running out of ideas to encourage Chinese families to have more children — which the government needs in order to sustain growth and support the elderly over the long term. Third, and most immediate: the upcoming Beijing Winter Olympics canceled ticket sales for domestic spectators — foreigners were not invited — as the more transmissible omicron variant has driven up COVID infections in China to the highest level since March 2020. It's only the latest sign that Xi's controversial zero-COVID policy is setting itself up for failure against omicron without mRNA vaccines. What'll it take for China to reverse course?

100,000: We're still waiting for news from the Pacific nation of Tonga, two days after a massive underwater volcanic explosion triggered a tsunami that was felt thousands of miles away and sent a plume of ash 100,000 feet into the sky. With communications mostly cut off, Australia and New Zealand have sent airplanes to assess the damage.

Omicron is here. The bad news is that it's more contagious. The good news is that mRNA vaccines work against death and hospitalization. COVID may soon become endemic in some parts of the world.

Not in China, where Xi Jinping's zero-COVID approach faces its toughest test to date with omicron. Why? Because China lacks mRNA jabs, and so few Chinese people have gotten COVID that overall protection is very low.