Biden's mistakes in Afghanistan were not "dereliction of duty"

In his latest Washington Post op-ed, Marc Thiessen makes strong statements about how and why the Taliban came to take control of Kabul. There have been big mistakes in executing this exit. But "dereliction of duty?" Not in our view. Ian Bremmer and Eurasia Group analyst Charles Dunst explain why in this edition of The Red Pen.

Today we're taking our Red Pen to a recent op-ed from the Washington Post written by Marc Thiessen, a Post columnist, American Enterprise Institute fellow, and former speechwriter for President George W. Bush. It's titled, "Greenlighting the Taliban's takeover of Kabul is a national disgrace," and makes some strong statements about how and why the Taliban came to take control of Afghanistan's capital city. I want to unpack some of his arguments for you and explain why we disagree. So, let's get out the Red Pen.

First, Thiessen argues that "all the horrors the world witnessed over the past two weeks…might have been prevented" had the United States opted to take over Kabul, rather than letting the Taliban do so.

Let's remember: "The enemy gets a vote." Thiessen is comparing the real world, with all of its unpredictability, to a counterfactual one where everything goes according to (his) plan. Even if the horrors he cited had been averted, wouldn't others have unfolded? Putting thousands of Americans back on Kabul's streets would have meant putting them in the crosshairs of terrorist groups like ISIS-K. Do we believe these groups wouldn't have targeted Americans in Kabul with suicide bombings, like the recent airport attack, or even engage them in firefights? Biden had to decide between two unpalatable options. He chose the one he believed would put the fewest Americans in harm's way. 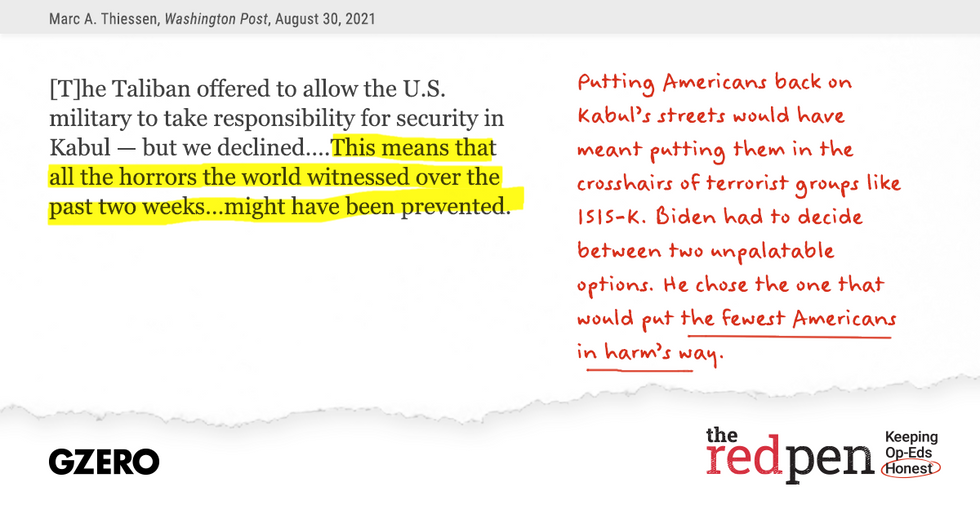 Next, Thiessen cites a former American senior general officer to argue that the "US military could definitely have secured the capital"––at least the green zone where Western embassies are located, plus access to the airport.

For starters, Thiessen bases his argument on the views of one "former senior general officer" whose identity we don't know. How widely shared are those views among current military officials? If the 20-year war has taught us anything, it should be some caution before arguing the United States could secure a city of over six million people indefinitely with a few thousand troops. Before leaving office, the Trump administration brought US troop numbers in Afghanistan to just 2,500, a 19-year low. By the end of July 2021, only 650 remained. Taking over Kabul would've required something politically incredibly challenging: a substantial troop surge that would've put more Americans in danger. Thiessen doesn't explicitly call for a surge, but the upshot of his critique is clear enough. There's an argument for a surge (even if politically very unpopular), he should tell us how many additional troops we would have to send in and for how long to hold onto a city the United States had already lost. 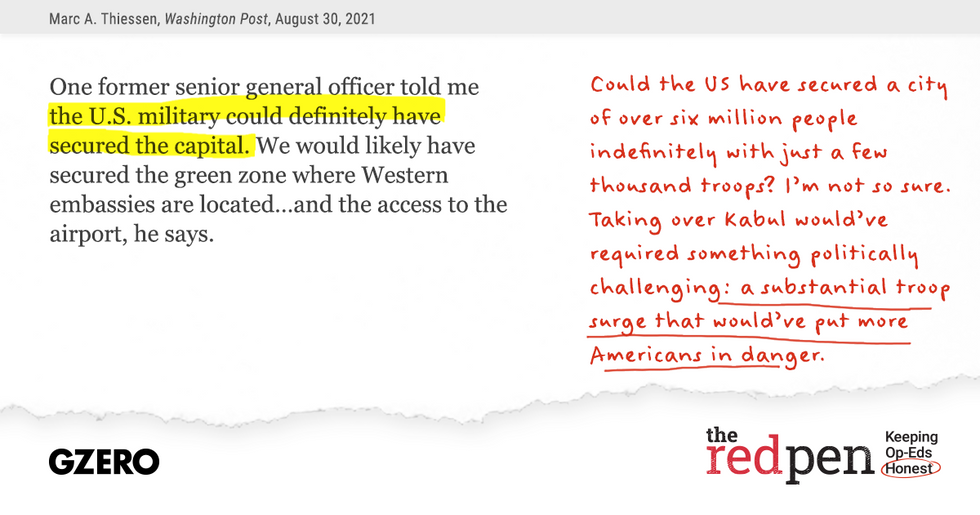 Thiessen also calls the Biden administration's decision to "cede" Kabul to the Taliban "a dereliction of duty unlike any we have seen in modern times."

Keep in mind it was Trump, not Biden, who went over the Afghan government's head back in February 2020 to negotiate with the Taliban and agree to remove all US troops from the country. There were US political considerations for doing so, I get it. But from that point, the Taliban's takeover of Kabul had, at that point, become a foregone conclusion 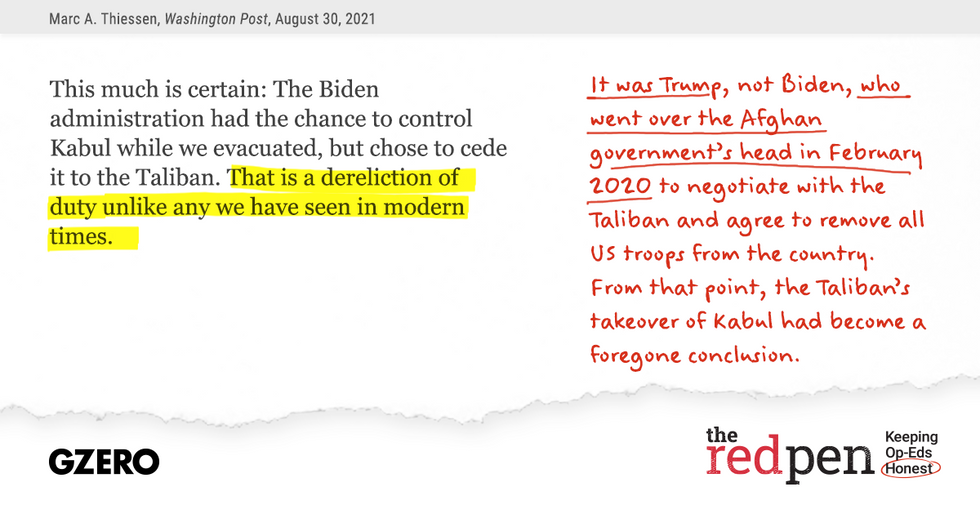 Next point: Thiessen writes that the administration's withdrawal "put the safety of American civilians, service members and Afghan allies in the hands of terrorists" — referring to the Taliban — "rather than the U.S. armed forces" and "led directly to the deaths of 13 Americans in an Islamic State attack on the Kabul airport."

Earlier, though, he almost presents the Taliban as an organization whose word General McKenzie should've trusted: "[T]he Taliban offered to allow the US military to take responsibility for security in Kabul — but we declined." What makes him believe a terrorist organization intent on retaking power would honor a pledge to allow US forces to secure the capital city? Which Taliban is it? 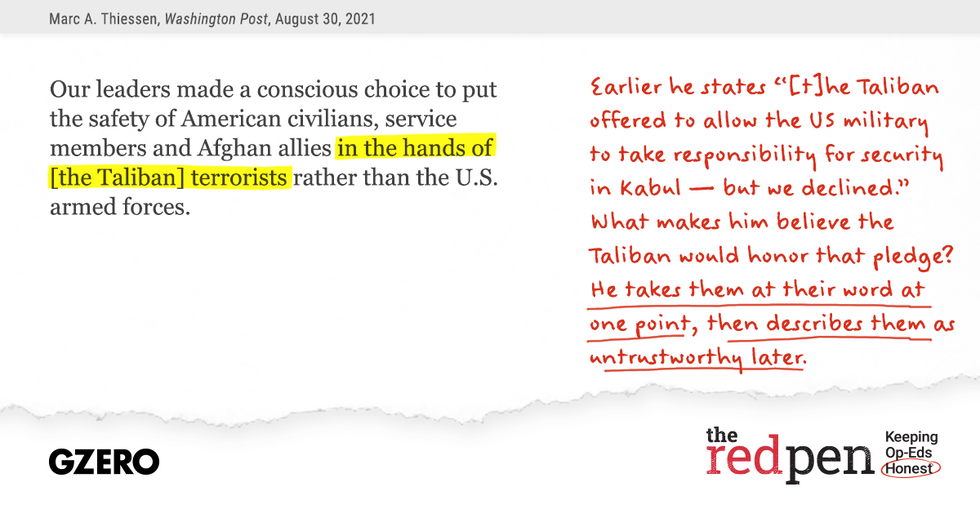 Finally, Thiessen concludes by arguing that Biden's decision to let the Taliban take over Kabul "led directly to the deaths of 13 Americans in an Islamic State attack on the Kabul airport."

Harrowing as the images coming out of Afghanistan are, Biden had decided to not risk even more US lives in the war's twilight. Staying at the airport and trying to hold onto Kabul for a few more weeks would have helped the United States evacuate more Afghan partners, but it would also have risked the lives of thousands of US soldiers. 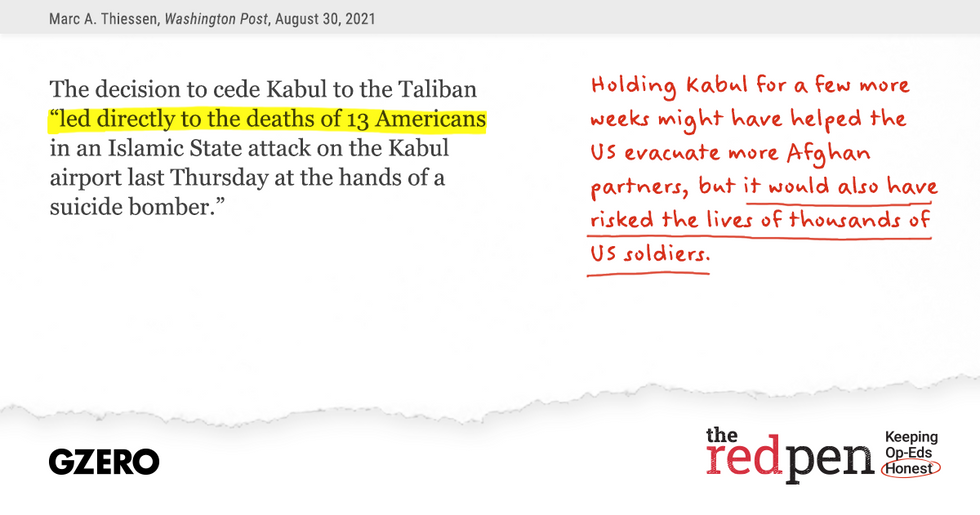 One thing I think many of us agree on — this has been a sad and embarrassing ending to the 20-year war in Afghanistan. We've left countless Afghan allies behind, despite promising them safe passage. August's events will no doubt cast an added shadow of grief over the coming anniversary of the 9/11 attacks. The Biden team certainly made mistakes in executing this exit. But "dereliction of duty?" No, not in my view.

One of the keys to accelerating financial inclusion and building a more equitable digital economy is to enable minority-owned businesses to scale. And one of the fastest ways to do that is through partnerships with a global network like Visa. At the Visa Economic Empowerment Institute (VEEI), we’re committed to providing research and insights on important issues related to inclusive economic policy. Our reports cover topics like what women-owned businesses need to unlock growth and how to empower Black and Brown-owned banks. Read more of our latest stories here.

For decades, European leaders have debated the question of whether Europe should have a common foreign policy that’s independent of the United States.

Germany, the UK, and countries situated closest to Russia have traditionally preferred to rely on membership in NATO and US military strength to safeguard European security at a cost affordable for them.

French leaders, by contrast, have argued that, with or without NATO, Europe needs an approach to foreign policy questions that doesn’t depend on alignment, or even agreement, with Washington.

There are those within many EU countries who agree that Europe must speak with a single clear voice if the EU is to promote European values and protect European interests in a world of US, Chinese, and Russian power.

A recent spate of violent crimes in New York City has made national headlines. Since Eric Adams was sworn in four weeks ago as mayor of America’s most populous city, violence on the streets — and the subways — has again become a major political focus. Things got even more heated this week, when two young cops were killed while responding to a domestic dispute in Harlem.

Crime is not only a dominant political issue in New York. It also resonates more broadly with American voters worried over increased lawlessness and unrest. Indeed, crime is already shaping up to be a wedge issue as Republicans vie to win control of the US Congress this November.

100 million: The US Navy is scrambling to find a $100 million F-35 stealth fighter jet that crashed and sank soon after taking off on Monday from an aircraft carrier in the South China Sea. One expert described the Cold War-ish race to locate the remains — stocked with classified equipment — before the Chinese do as "basically The Hunt For Red October meets The Abyss."

Nord Stream 2 used as a bargaining chip with Russia. The US now says that if Russia invades Ukraine, it’ll block the Nord Stream 2 pipeline, which is set to transfer even more natural gas from Russia to Germany under the Baltic Sea. This is a big deal, considering that Germany – thirsty for more Russian gas – has long been pushing for the pipeline to start operating despite ongoing objections from Washington. The $11 billion energy project, which would double Russian gas exports to Germany, is seen as (a big) part of the reason why Berlin is reluctant to push back hard against the Kremlin over its troop buildup at the Ukrainian border. Still, German officials admit Nord Stream 2 could face sanctions if the Russians invade, suggesting that the Americans’ threat was likely coordinated with Berlin in advance. This comes amid ongoing diplomatic attempts to de-escalate the Ukraine crisis, with US President Joe Biden and German Chancellor Olaf Scholz set to meet at the White House on February 7.

Russia's president, she says, has put a “noose” around Ukraine with a troop build-up along the border that could spell invasion in the near term. The US has led an effort to deescalate the situation through diplomacy.

Ever wonder why everything seems to be a major crisis these days? For former Google CEO Eric Schmidt, it's because artificial intelligence has determined that's the only way to get your attention.

What's more, it's driving an addiction cycle among humans that will lead to enormous depression and dissatisfaction.

Angela Merkel is retired — but only from politics. Still, maybe she's not as good at other jobs as she was as German chancellor.

Security flaws in China’s My2022 Olympics app could allow surveillance

Is the West united against Russia? Sort of.