Russia and Ukraine have been at odds over lots of things in recent years, but the latest spat is over something particularly fluid and intractable: water.

While much of the attention on Ukraine's conflict with Russia tends to focus on eastern Ukraine, where Russian-backed separatists control two Ukrainian provinces amid an ongoing civil war that's already killed 14,000 people, there's also Crimea, which Russia annexed in 2014 and continues to govern directly.

Since that time, Crimea has been running out of drinking water, and Moscow isn't happy about it.

A fluid backstory: Crimea is a sea-girdled peninsula of arid steppes and salty marshes. For decades, a Soviet-era canal brought Crimea 85 percent of its freshwater from rivers on the Ukrainian mainland.

But that began to change in 2014: after a popular uprising in Ukraine ousted the country's Kremlin-friendly president, Russia annexed Crimea, which is the only region of Ukraine where ethnic Russians predominate.

Although neither Kyiv, the US, nor the EU recognize Russia's control over Crimea, Ukraine has no way of kicking out Russia's vastly superior forces.

But at the same time, as long as the Kremlin de facto governs the place, Kyiv believes it no longer has any responsibility for the well-being of the people who live there. After all, they are now under a Russian flag, not a Ukrainian one.

And that's where the water crisis comes in, dam it! After the Russian takeover of Crimea, Ukraine built a dam across that Soviet-era canal to stop the flow of water to the peninsula. 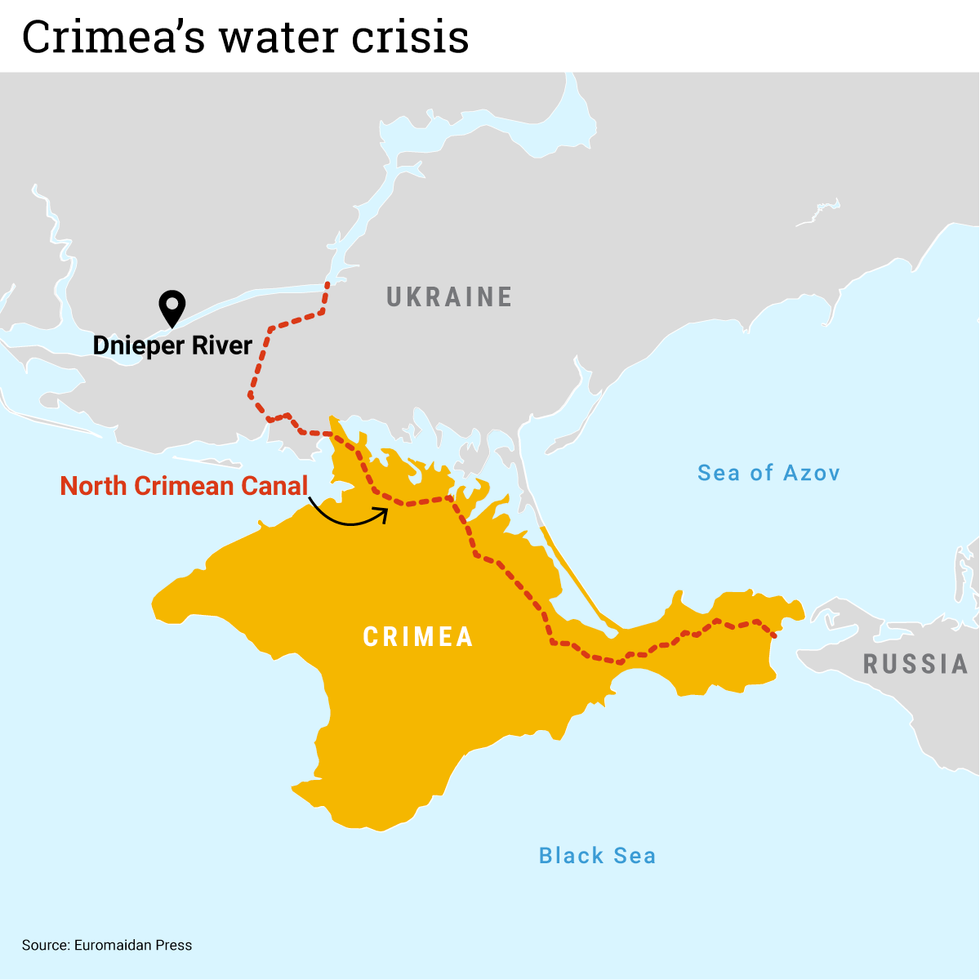 The political and practical logic was simple: Russia can't expect Ukraine to continue watering a garden that the Kremlin has stolen. And Ukrainian officials have made clear that they don't intend to change their minds about that.


As a result, Crimean authorities have since 2014 been forced on occasion to ration water, and after a particularly harsh drought earlier this year, Moscow leveled the charge of genocide at Kyiv for its decision to block the canal. This week, the Kremlin accused Kyiv of ecocide as well.


All of this has forced Russia to invest hundreds of millions of dollars in Crimean water infrastructure, not only for the drinking and irrigation needs of the region's 2.5 million civilian residents, but also for the growing number of Russian naval personnel stationed there.

"Crimea river," you might say, but all that money adds up. According to Bloomberg's numbers, the more than $20 billion that Russia has spent on Crimea is roughly equal to two entire years of Russia's entire education budget.

This is part of a bigger issue, the old "you broke it, you bought it" problem: "returning" Crimea to Russian control in 2014 brought Putin an unprecedented windfall of political support at home. But now he's on the hook for it: letting Crimeans go thirsty, or live in the dark, just isn't an option, but actually running a non-contiguous, water-poor peninsula costs a huge amount of money.

With recent droughts and local mismanagement making the water problem worse, the Kremlin seems keen to open the taps, as it were, on this particular issue.

What next? Despite a Russian troop buildup in April, the Kremlin insists there will be no "water war" with Ukraine. But Crimea's water shortage isn't getting any better, and global warming certainly won't help.

Pour yourself a tall glass of water, and watch this space.

The pandemic ushered in a boom in new businesses, with growth driven largely by entrepreneurs and small businesses in online retail, transportation, and personal services. According to our recent survey, small businesses indicated that to continue to thrive, greater digital support is even more important than more loans or grants. Their top priorities? Better internet connections. More cybersecurity capabilities. Greater digital sales support. Increasing digital payments. Read more about how we can work together on this important issue from the experts at the Visa Economic Empowerment Institute.

Kevin Allison, director of geotech at Eurasia Group, is concerned about the rise of very powerful tech companies disrupting centuries of geopolitics led by the nation-state.

Listen: Xi Jinping's zero-COVID approach faces its toughest test to date with omicron. Why? Because China lacks mRNA jabs, and so few Chinese people have gotten COVID that overall protection is very low. A wave of lockdowns could disrupt the world's second-largest economy — just a month out from the Beijing Winter Olympics.

That could spell disaster for Beijing, Yanzhong Huang, senior fellow for global health at the Council on Foreign Relations, tells Ian Bremmer on the GZERO World podcast. If things get really bad, though, Huang believes China will pivot to living with the virus, especially as the cost of keeping zero COVID in the age of omicron becomes too high.

First question, how is the crisis in this part of Europe developing?

Not good. There's been a week of intense diplomacy with talks in Geneva, and Brussels, and Vienna that produced virtually nothing. The Russian, sort of key demands are outrageously unrealistic. They know that is the case. The US is trying to engage them on somewhat different issues. We'll see if there's any prospect there, but it doesn't look too good. I think the likelihood is that we gradually will move into the phase of what the Russians call military technical measures, whatever that is.

For Angela Hofmann, practice head for Industrial & Consumer at Eurasia Group, the world's most visible brands are in for a very rocky year.

Navigating culture wars will be very tricky, as well as fighting with competing demands from consumers, employees, and regulators on issues like China, diversity, and voting rights.

Political polarization in the US isn’t just a problem within the country, points out former US national security official Fiona Hill. Deep divisions, she says, actually make America look weaker on the global stage — particularly to someone like Russia’s president Vladimir Putin.

“Putin loves our disunity," Russian expert Hill tells Ian Bremmer. "It's incredibly useful as a tool to exploit in that toolkit that he has.”