Donald Trump's relevance to US politics doesn't disappear on Jan 20, 2021

In 2020's final installment of The Red Pen — as we say goodbye not only to this tumultuous year, but also to the Trump presidency -- Ian Bremmer and Eurasia Group's US team: Jon Lieber, Jeffrey Wright, Clayton Allen, and Regina Argenzio are taking the Red Pen to an op-ed by John Harris, veteran political journalist and co-founder of Politico, optimistically titled, "Relax, a Trump comeback in 2024 is not going to happen."

On January 20th, Joe Biden will become the 46th President of the United States. So how long will Donald Trump still be a thing in US politics, and does he have another shot at the White House? John Harris makes his case that Trump is going to fade away based on historical precedent that the US system has seen disruptors before and endured other politicians who were more obsessed with their own publicity than the greater goals of their party. And that's true, but we're not so sure that Donald Trump is quite the same phenomenon.

Let's get into it. First, Harris writes, "There are abundant precedents suggesting that Trump does not have another important act in national politics." He points to Joseph McCarthy, George Wallace, and Ross Perot. And he argues that while cults of personality in American politics are quite common, they never live long, and Trump has offered no reason to suppose he will be an exception. Well, hold on a second. 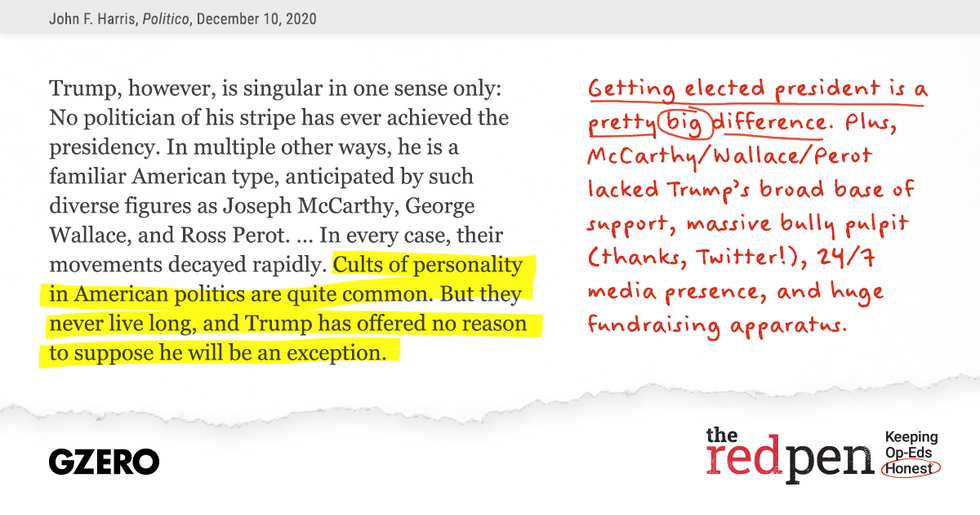 The biggest difference between Trump and McCarthy, Wallace, and Perot is that Trump actually got elected president. He's got a very broad base of support, unending media presence, and the ability to fundraise at a massive scale. Ross Perot got 8 million votes when he ran as a third-party candidate against Bill Clinton and Republican challenger Bob Dole back in '96. Trump lost the 2020 election as the incumbent Republican president and he got more than 74 million votes as he keeps reminding us. Big, big difference there.

Next Harris argues, "No one can seriously believe that Trump cares more about the public's problems than his own and that is not a recipe for sustaining political power in contrast to his 2015 agenda, which addressed trade, immigration, globalization and perceptions of national decline." 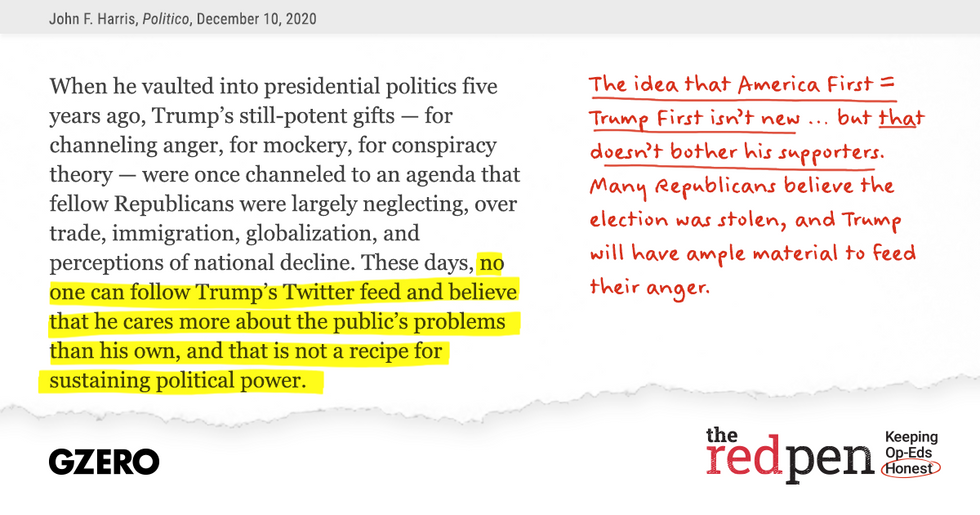 That's not exactly breaking news to anyone who is a critic of Trump on both sides of the aisle, but clearly, it's not how Trump's supporters feel. Remember, if it wasn't for coronavirus, Trump wins this election. He still did better with Black and Hispanic voters than in 2016 and among people who thought the economy was the most important issue in the election. And Republican voters who stood by Trump are angry. Most of them believe the election was stolen and that's not a sentiment that can be waved away on inauguration day.

Harris also writes that, "Trump is essentially a one trick pony. He goes to extreme and he doubles down no matter what. That combination of flawed judgment and impoverished imagination hardly supports optimism about his ability to retain power after January 20th," he writes. 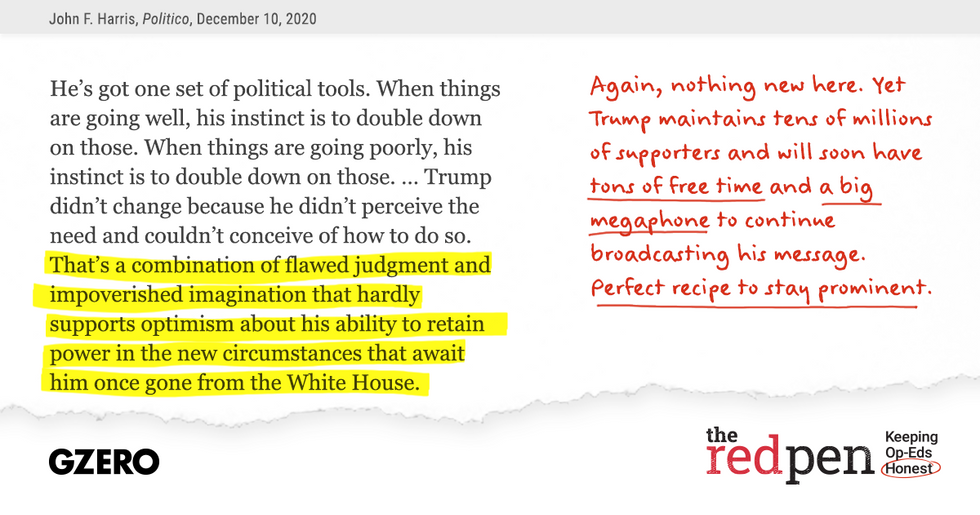 We say again, "Is that news?" Trump has been going to extremes and demonstrating flawed judgment for four years and yet he still has tens of millions of supporters and he will now have tons of free time and the largest megaphone in the Republican party to promote his message. It's a recipe to stay prominent.

Finally, Harris argues that, "Republicans who want to regain control of the party and become president themselves can simply transcend Trump. They can make Trump look irrelevant, an artifact of an era that has passed." Yeah, they've done such a great job of transcending him so far. Look, let's face it, the GOP right now has very little bench. There is no real era parent to claim that mantle and begin the road to 2024. 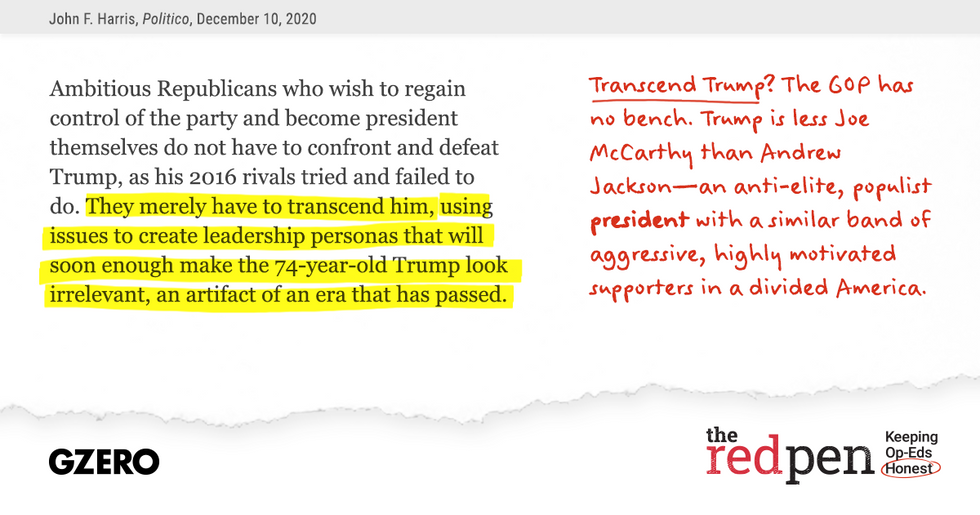 Rather than comparing Trump to McCarthy or Ross Perot, we should look a little deeper into American history at Andrew Jackson, the seventh US president. In a very divided 19th century America, Jackson embodied all the same anti elite and populous arguments as Trump and had a very similar band of aggressive and highly motivated supporters. Trump has expressed his admiration for Jackson several times in his presidency, he even put a portrait of Jackson right in the oval office. (I think that's probably coming down on the 21st of Jan.) Jackson, by the way, served two terms. They were consecutive, and that is certainly not happening this time. But it's way too soon to say that President Trump has no voice beyond January 20th.

That's your Red Pen this week and for this year. We'll see you again real soon in 2021.

Exports controls are "worst possible" thing to do in a food crisis, says UN Foundation chief

Gillian Tett: Ukraine knows how to get what it wants from the West