Jim Geraghty argues in a National Review op-ed that we shouldn't blame Trump for the fact that the US has one of the highest coronavirus death rates in the world. But though he's right that not everything is Trump's fault, Ian Bremmer and Eurasia Group analyst Scott Rosenstein take out The Red Pen to show that the evidence he cites to let Trump off the hook doesn't hold water.

Today we are taking our Red Pen to an op-ed entitled "Why the U.S. Ranks So Poorly in Coronavirus Deaths Per Million." A very straightforward title for an oped. It was written by senior political correspondent Jim Geraghty of the National Review.

The US ranks in the top ten in per capita death rates, with as of this recording, roughly 488 deaths per million. And Geraghty argues that we shouldn't blame Trump for the fact that the US has one of the highest coronavirus death rates in the world. Now, he's right that not everything is Trump's fault, I've made that point many times myself, but the evidence that he cites doesn't actually let Trump off the hook. So, let's dive in.

First, Geraghty are argues the coronavirus data from other countries are greatly underreported and that their actual deaths per capita might be as high or higher than the United States. He cites Indonesia, China, Russia and Bangladesh. It's safe to say that pretty much every country in the world is undercounting Covid case rates and death rate for a variety of factors like insufficient testing and plain old corruption. And the United States is no doubt, undercounting, too. But let's do the math: the US has reported, so far, about 160,000 deaths out of a population of 330 million. China has confirmed about 4,000 deaths with about 1.4 billion people. Now, very few outside observers, myself included, trust that China's numbers are accurate. But to come close to US deaths per capita, China would have to be, have them reported elsewhere, some 700,000 deaths. I mean, are we really ready to suggest that China's missed or are covering up 700,000 deaths? That's kind of insane, right? I mean, even for China, that's a crazy tall order. So, no. 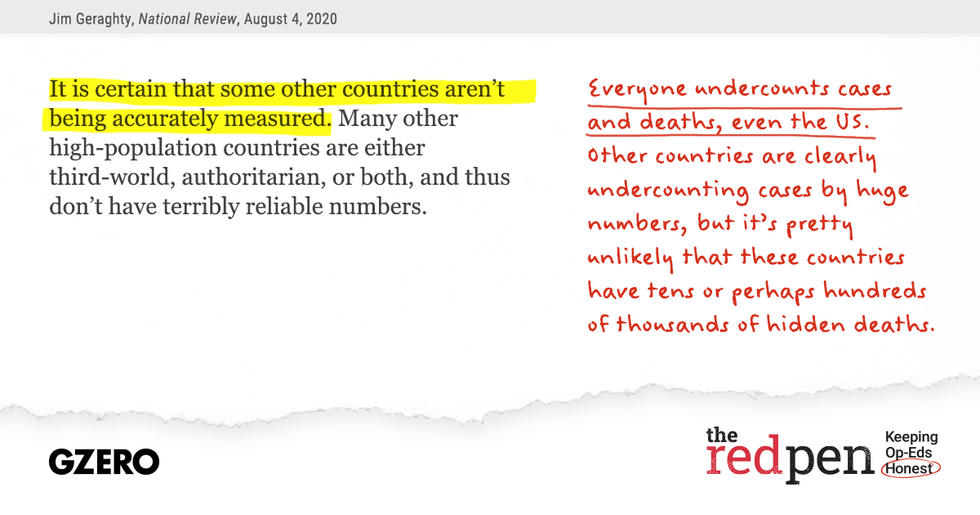 Next, Geraghty writes that other countries held advantages over the US that left them better prepared to fight the pandemic, including more experience with SARS and other disease outbreaks. And I need to push back against this. The reality is the United States was in the best possible position to handle this pandemic. We have the best scientists, the best labs, and many billions of dollars a year since SARS - more than any other country - invested in pandemic preparedness. Other countries, particularly in Southeast Asia, did have a lot of experience with past disease outbreaks, but they had nowhere near the resources of Washington, DC. There are many reasons the US handled coronavirus terribly, but a lack of resources and a lack of planning for this kind of pandemic is really not one of them. 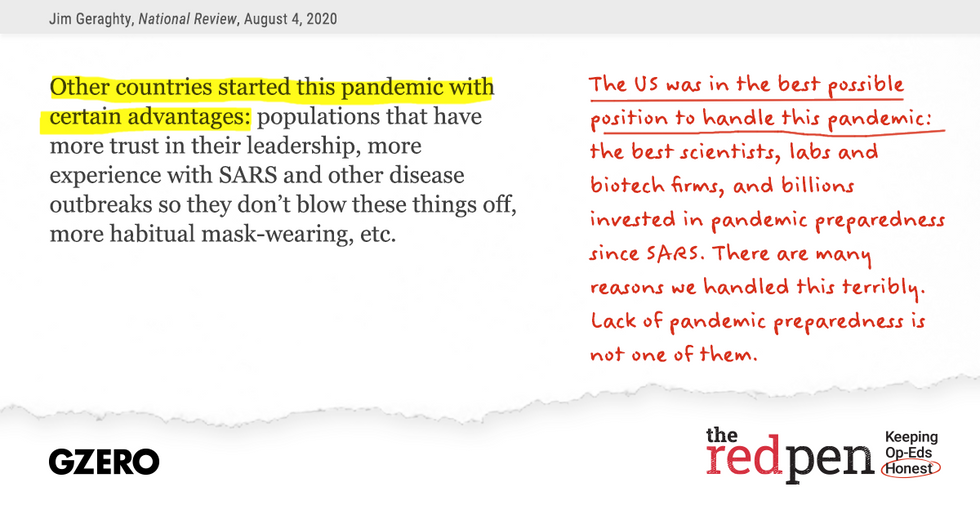 And then finally, Geraghty suggests that blame should be spread out to include other leaders whose decisions were off the mark early. And I completely agree that leaders at all levels of American government made mistakes early on, when information was scant, including governors like my own Andrew Cuomo in New York. And certainly, the decision to reduce hospital strain and order nursing homes to take coronavirus patients early in the pandemic was a tragic mistake that led to unnecessary deaths. Almost half of the deaths in the New York City metropolitan area were in assisted living facilities. Did not need to happen. You can't blame Trump for that. But what matters is whether leaders can change course as new information emerges and avoid politicizing science. And that's where President Trump has come up short, time and again. As the pandemic continues to rage across the United States, it's become painfully clear that the federal government failed to put together a national coordinated response. And as president of the United States, the buck and ultimately the deaths per capita, stops with the commander in chief. 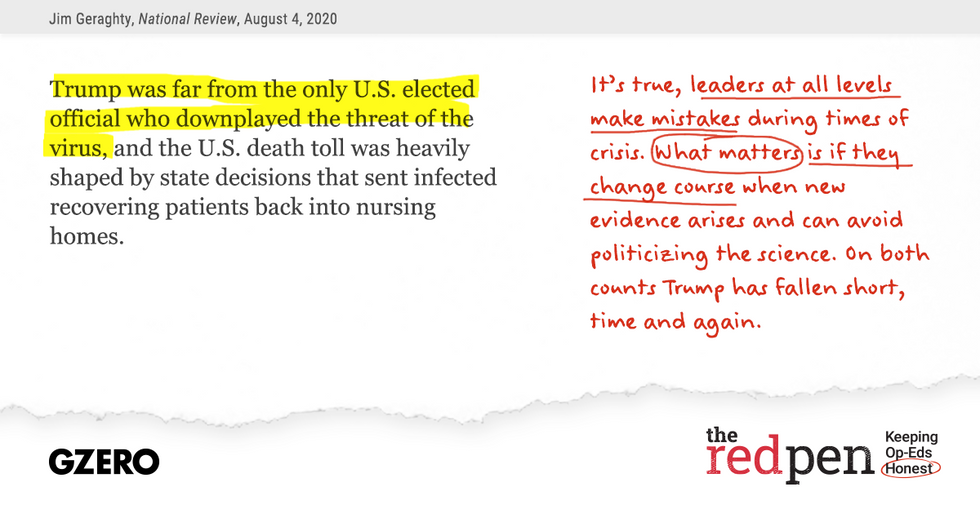 That's our Red Pen this week. I hope you found this worthwhile. I'll see you again soon. In the meantime, stay safe and avoid people.

"We're in this together" — UN Foundation chief