Welcome to this special edition of Signal, our first on a Sunday, in which we'll look ahead to what could make the world notrecover from COVID in 2022, track inflation globally, and look back to political stories we followed this year — and will continue watching next year. This edition is part of "Living Beyond Borders," presented by GZERO and Citi Private Bank.

Thank you for reading — while you're at it, please tell your friends to subscribe here. 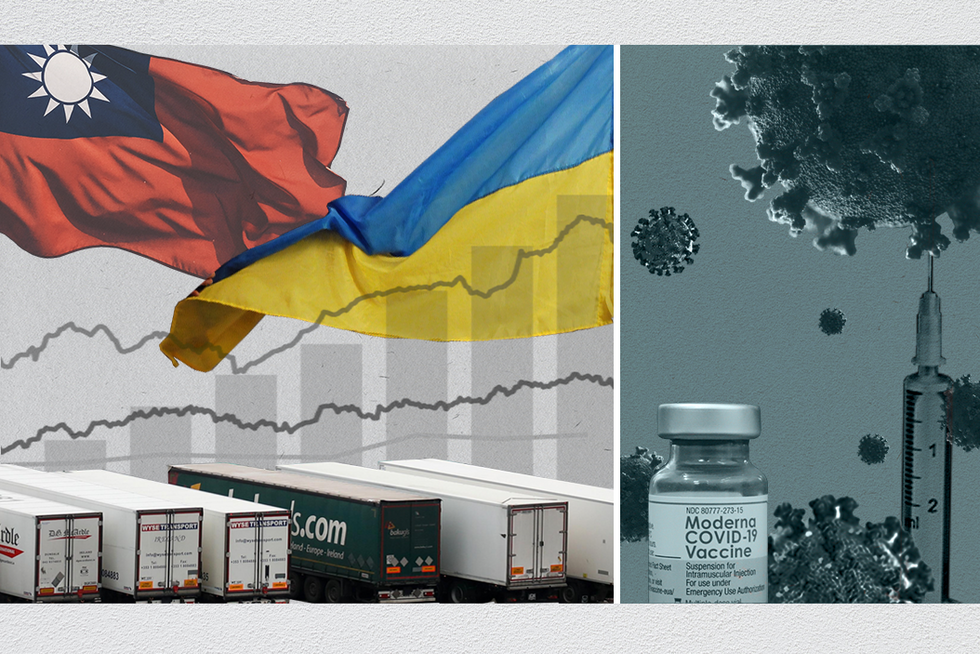 Many of us, at least in the advanced economies, thought the pandemic would be over sometime in 2021. Vaccines worked, and a lot of people got them. Restrictions were relaxed, and things started to return to normal. But then came the virus variants, which threw a wrench into hopes of a speedy recovery. What'll happen next year?

Here are three things that could threaten the global post-COVID comeback.

The first major problem is more COVID variants, and how countries react to them.

Everyone's panicking now about omicron, which so far seems to be more contagious and more overpowering to vaccines than previous variants. It also seems, at least for now, to be less deadly – though if it spreads widely that could still mean a lot of deaths. Travel bans are back. Lockdowns could follow. Vaccine mandates will likely expand.

All of this is starting to feel like the darkest days of 2020 all over again — though the vaccines are likely to prevent similarly high death rates.

And even after omicron passes, we don't know what the next letter in the Greek alphabet will do. It’s possible that omicron could spread widely enough that it becomes the final big wave of the pandemic. But with nearly half the world still unvaccinated — and clear evidence that the disease can infect even the vaccinated — it’s also possible that new variants will emerge that pose fresh threats to the vaccinated and the unvaccinated alike.

That will raise, yet again, the thorny political questions about lockdowns, border closures, mandates, and remote learning. But after two years of first lockdowns and then vaccination campaigns, followed by fitful returns to normalcy later imperiled by new variants, the political backlash against fresh restrictions is sure to be even higher. How do we deal with another year of this?

The second big problem, a result of the first, is that COVID-related economic disruptions will continue.

The pandemic messed up global supply chains, which are still struggling to keep up with high demand. Delivery delays, higher shipping costs, and shortages of just about everything have become a huge headache for consumers and for governments, which can do little to fix the problem.

Supply-chain disruptions are the main factor driving soaring inflation around the world. Rising prices will make leaders in countries where inflation is going through the roof, like Brazil or Turkey, walk a tightrope between encouraging economic recovery and taking unpopular measures — like spending cuts or interest rate hikes — to fight inflation.

That economic frustration could, in turn, lead to anti-incumbent and anti-establishment rage at the ballot box. There are several big elections coming up next year where those in power will not be able to tell voters, “you're better off than before you elected me.”

Finally, there are two long-simmering geopolitical conflicts that got hotter this year, and could boil over in 2022.

First, Ukraine. Vladimir Putin has amassed 100,000 troops at the Ukrainian border because he doesn't want NATO to expand further into former Soviet territory. Putin has little to gain and much to lose from an actual invasion, but the risk of one is higher than it's been in at least seven years — that is, since the last time Putin invaded Ukraine.

Russia, the US, and Europe are playing a dangerous game of cat and mouse. If Putin overplays his hand, America could shut Russia out of the SWIFT, the cross-border payment network used by most banks worldwide. The Europeans, for their part, could cancel Russia’s Nordstream 2 pipeline, which would carry Russian gas that Europe depends upon keep homes warm.

Second, Taiwan. Xi Jinping has long aimed to “reincorporate” the self-governing island into the People’s Republic, but throughout 2021 China has been amping up the pressure by taunting the Taiwanese by air and sea. Meanwhile, the Biden administration has signaled that, after decades of deliberate ambiguity, it might in fact be prepared to actually defend Taiwan.

So, will China invade Taiwan next year? Almost surely not. Despite China’s growing military power, it would be a risky and immensely costly undertaking, particularly if the US does intervene, and it would almost certainly lead to crippling economic sanctions.

Still, Xi is keen to play up the nationalist card by talking big about Taiwan. With US-China relations quite frosty these days, and the Americans snooping around Taiwan as well, there’s always the risk of a miscalculation that blows up fast. 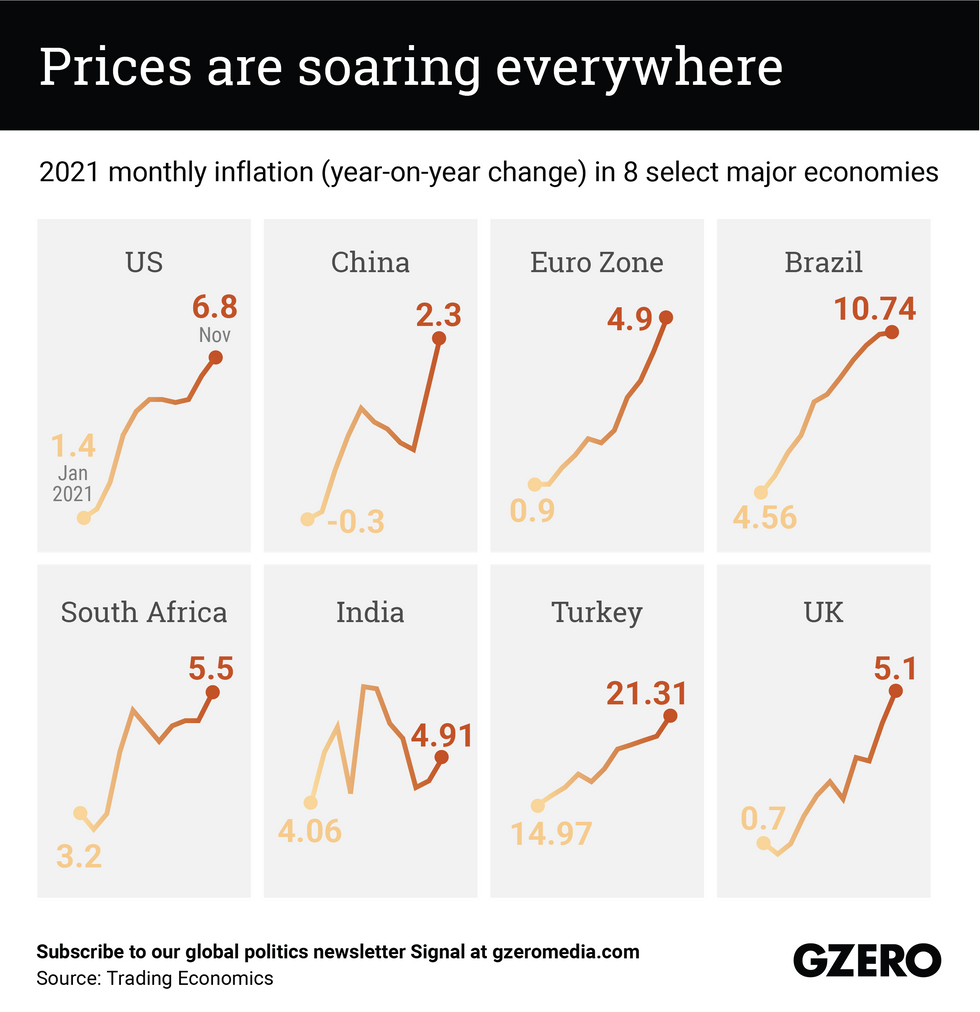 It started growing in the spring, crept up in the summer, and exploded in the fall. Inflation now dominates the political conversation in many countries. COVID-related disruptions to supply chains are considered the primary cause, but economists also argue about other factors like too much stimulus spending. What to do about it? The classic recipe is cutting interest rates, which will make borrowing more expensive, and risks slowing down the economic recovery everyone’s been dreaming of for two years. We take a look at how prices have risen in a few key places around the world. 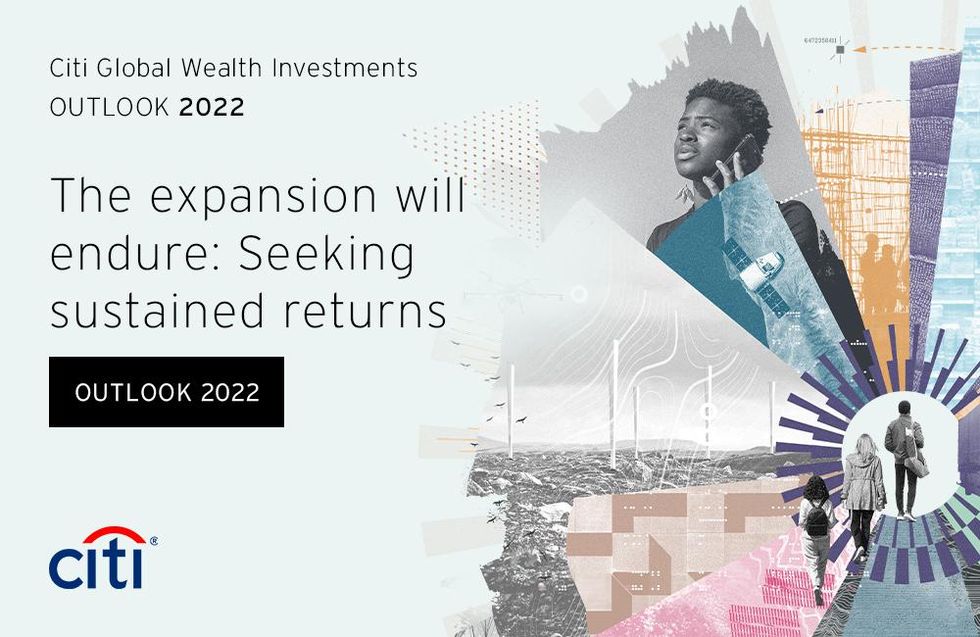 The economic recovery and bull market are maturing, with moderate growth expected ahead. We believe portfolios should evolve to provide exposure to more defensive sectors, quality firms, and dividend growth strategies. In Outlook 2022 we highlight asset classes and regions that may lead the way in 2022 and beyond.

You can click here to read the full report, learn more about key themes in the report, and view related videos.

What We’ll Keep Watching in 2022: The authoritarian plague, climate vs energy crisis, US politics in Georgia 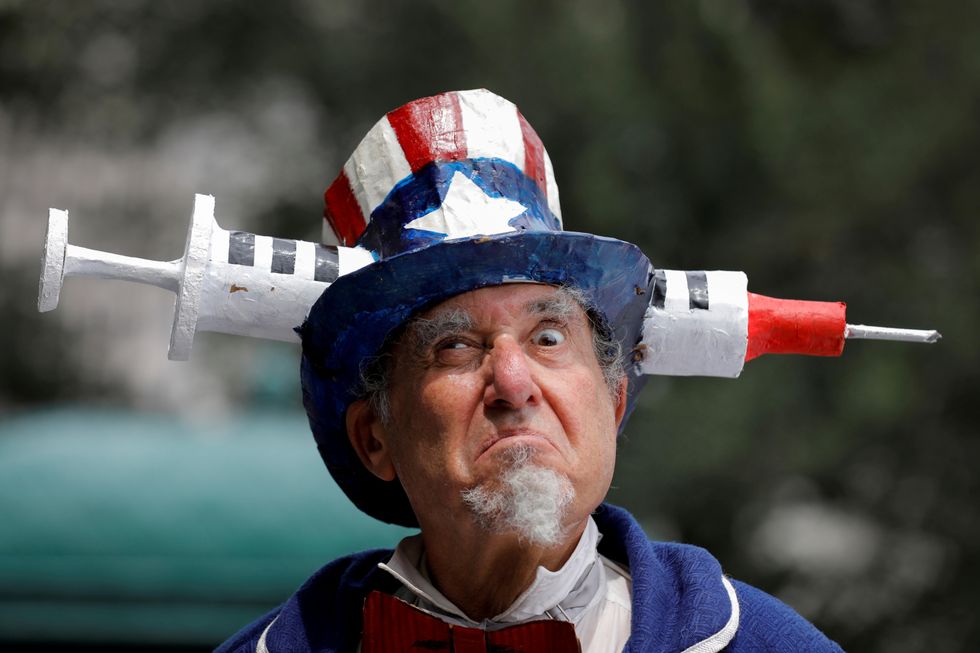 COVID & authoritarianism. Around the world, the pandemic has given national governments vastly greater mandates to manage how their societies and economies work. That has, among other things, created room for authoritarianism to grow and flourish. But there are different views on how that’s happened, and where. On the one hand, undemocratic or illiberal governments used pandemic restrictions to suppress anti-government protests or muzzle critics. Think of China using COVID restrictions to stop the burgeoning Hong Kong protests, or Russia doing the same to crack down on opposition rallies. Freedom House reported this year that the pandemic had contributed to democratic backsliding in 73 countries, the most since 2005. But there are also those who see authoritarian shadows in what democratic governments have done: imposing vaccine mandates, continued lockdowns, and school closures. In the US, a backlash against this has boosted Republicans ahead of next year’s midterms, while fresh lockdowns and mandates have also provoked fierce protests in Europe. There is also the thorny and unresolved question of how to police misinformation. Some Americans think social media platforms are erring on the side of too much content moderation as they struggle with the difficult problem of weeding out dangerous pandemic fake news. Overall, the question of what governments did during the pandemic, and whether it exceeded their mandates, will affect politics and geopolitics deep into 2022.

Going green without blackouts. This year at COP26, global leaders agreed to major climate pledges. As of now, some 90 percent of the global economy is committed to net-zero goals. That’s good news. But translating those promises into action is going to be a major political challenge in 2022. For one thing, new commitments to phase out fossil fuels are coming right as the world struggles with an energy crisis — shortages of natural gas and coal are driving up fuel and electricity prices around the globe. What's more, climate policies will figure in two major 2022 elections. One is in France, where it was barely two years ago that fuel taxes provoked the massive “yellow vest” protests which almost derailed Emmanuel Macron’s presidency. The other is the US midterms, where the climate aspects of Joe Biden’s Build Back Better plan will be a major point of disagreement between Republicans and Democrats.

Georgia 2022. As we move into an election year in the United States, we’ll be closely watching political dynamics in Georgia, a state that has emerged as a fascinating microcosm of several important trends in American politics. First, Georgia offered a vivid example of how the swing of suburban voters — in this case, in and around the state capital of Atlanta — tipped the 2020 presidential and congressional elections toward Democrats. Second, the January 2021 surprise elections of Jon Ossoff and Raphael Warnock to the US Senate gave the Democrats majority control of the upper house. Anything Democrats accomplish in Biden’s first two years as president is possible only because both Democrats won in Georgia. Third, Georgia is a central battlefield in fights over the counting of votes in 2020 and for voting rules for future elections. Fourth, Biden’s sagging approval ratings in Georgia underline the strong national momentum that Republicans now enjoy. And lastly, Donald Trump is actively backing Senate and gubernatorial candidates in Georgia who are challenging the state Republican establishment — and potentially dividing Republican voters. Republicans dominated Georgia’s politics for a quarter-century until Democrats broke through in 2020-21 by the slimmest of margins. No state will provide a better bellwether for US political trends in 2022.

Podcast — COVID Continued: What the world will look like in 2022 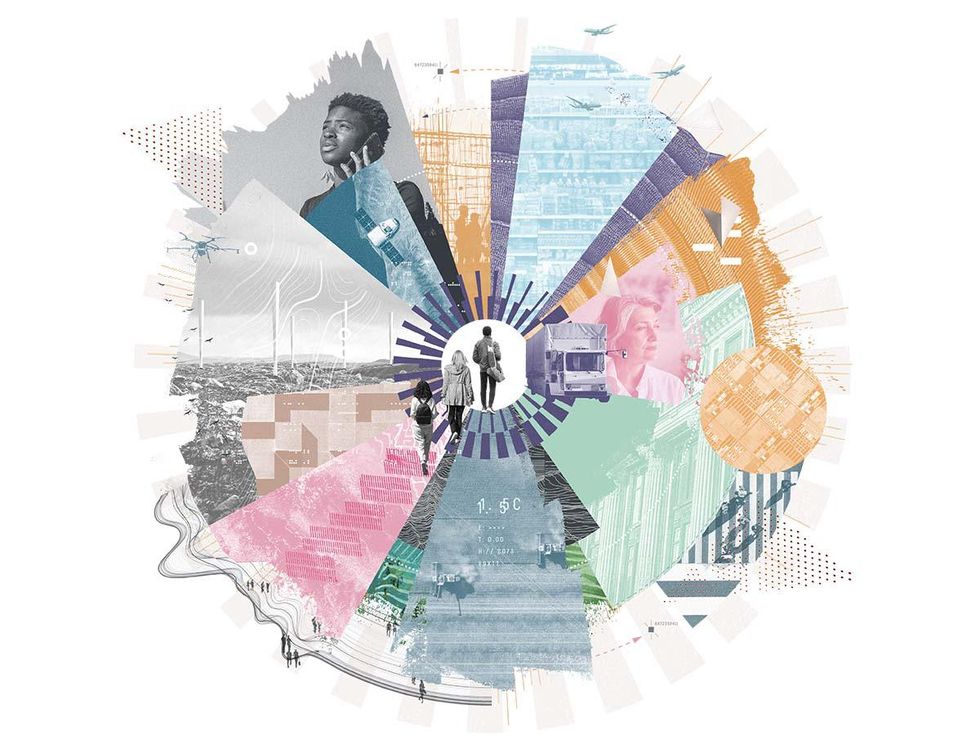 The latest episode of Living Beyond Borders, a special podcast series from GZERO brought to you by Citi Private Bank, looks at what we learned this past year, and what we can expect in the year ahead. Moderated by Caitlin Dean, Head of the Geostrategy Practice at Eurasia Group, this episode features David Bailin, Chief Investment Officer and Global Head of Investments at Citi Global Wealth and Ian Bremmer, President at Eurasia Group and GZERO Media. 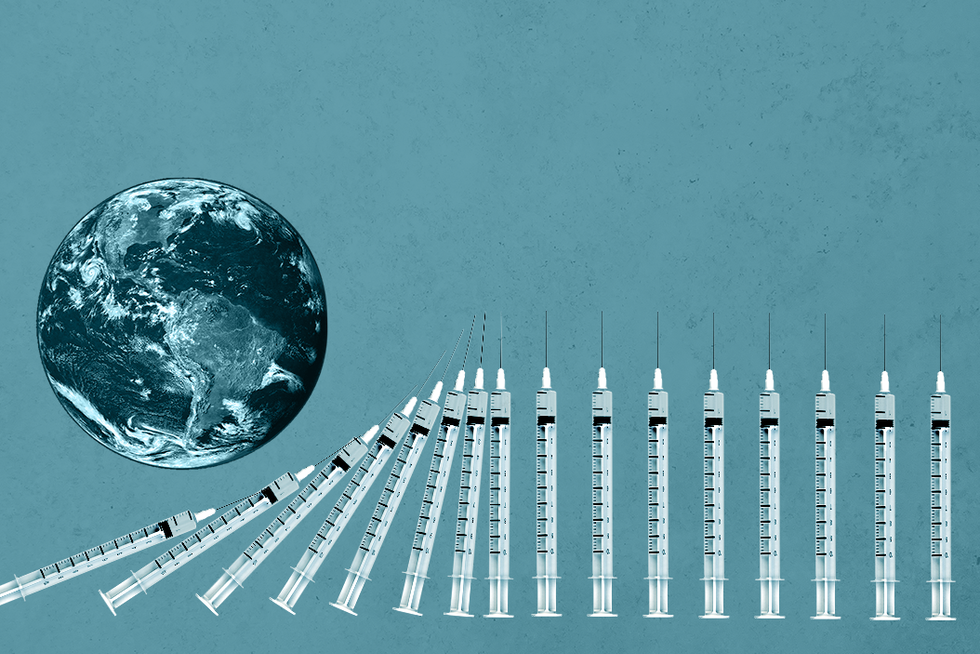 56.8: As of December 18, 56.8 percent of the global population has received at least one COVID vaccine shot. We sometimes don't realize how big of an achievement this is from just a year ago, when frontline health workers were the first to get jabs.

11: A ransomware attack occurred every 11 seconds in 2021, according to one estimate. Earlier this year, hackers carried out their most famous attack to date against Colonial Pipeline, which supplies almost half of the oil and gas consumed in the US Eastern Seaboard.

540 million: Global 5G connections are expected to reach 540 million by the end of the year, according to a new report. That's more than double the amount in all of 2020.

23.1: Wind became Spain's top energy source this year, overtaking nuclear for the first time. Half of the country's energy now comes from renewable sources, which the government hopes will help bring down sky-high power prices in 2021.

Today's edition looks ahead to the big challenges of 2022. For more on the risks that await us in the year ahead, keep an eye out for the first Signal edition of 2022, which will feature the annual Top Risks report by our parent country, Eurasia Group. You'll be able to read the report and join a special livestream conversation that day with Ian Bremmer. In the meantime check out our summary of 2021 Top Risks — how'd we do?

This edition of Signal was written by Alex Kliment, Carlos Santamaria, and Willis Sparks. Art by Annie Gugliotta and Paige Fusco, graphic by Paige Fusco.