In an op-ed titled "Iran Arms Embargo Reckoning," the Wall Street Journal editorial board argues that ending the UN arms embargo on Iran was a major flaw of the 2015 nuclear deal and questions whether Biden could do anything to contain Iran at this point. Ian Bremmer and Eurasia Group's Henry Rome take out the Red Pen to explain why this discussion misrepresents the importance of the embargo and the consequences for its expiration.

So, the US presidential election is now just days away, and today's selection is focusing on a specific aspect of foreign policy that will certainly change depending on who wins in the presidential contest—namely America's approach to Iran.

You've heard me talk before about the many similarities between Trump and Biden on some international policies, like on China or on Afghanistan. But Iran is definitely not one of those. Trump hated the JCPOA, the 2015 Iranian nuclear deal, put together under the Obama administration, and he walked away from it unilaterally. Joe Biden, if he were to become president, would try to bring it back.

But this article focuses on one specific aspect of the deal—it was a concession made to Iran in exchange for the promise of curbing Iran's nuclear ambitions. There was a long-standing UN embargo that prevented Iran from buying conventional weapons like tanks and missiles and exporting arms. As a tradeoff in the 2015 agreement, that embargo was set to end—and it did—just a few days ago.

The Wall Street Journal is not happy about that one bit and the piece calls this concession a flaw of the Obama deal. It also questions whether Biden could do anything to contain Iran at this point.

The Wall Street Journal is not happy about that one bit and the piece calls this concession a flaw of the Obama deal. It also questions whether Biden could do anything to contain Iran at this point.

Number one, the Trump administration sought an extension of the embargo this past summer which was blocked in the United Nations Security Council by China and Russia. The Wall Street Journal writes that the countries that abstained in that vote—including the UK, Germany and France, "stayed silent despite Iran's history of promoting terror in Europe." 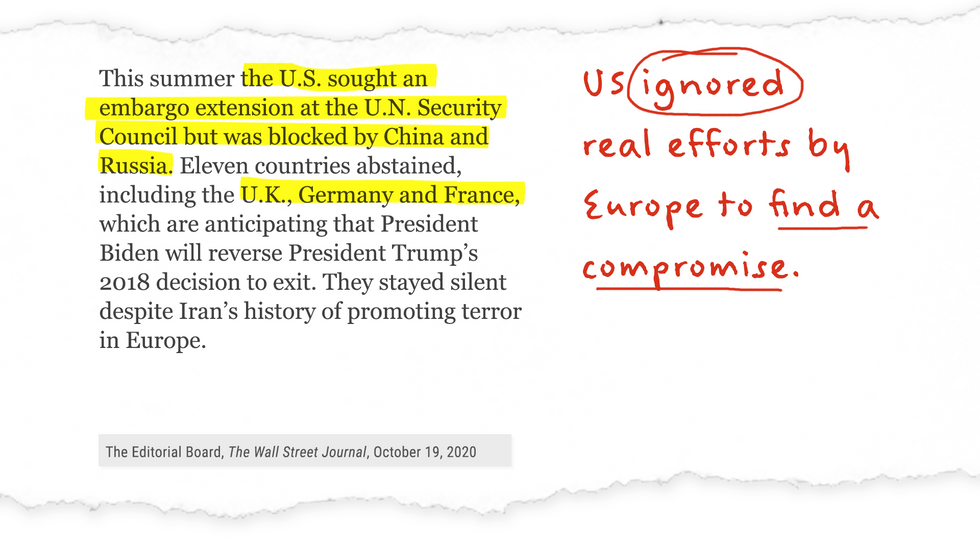 Actually, the United States ignored real efforts by Europe to find a compromise on the arms embargo this summer. Like proposing a temporary extension of the ban on Iranian weapons imports and tightening restrictions on Iranian exports. They suggested that the United States under the Trump administration stuck to an all-or-nothing stance and blew the Europeans off. So, no, America didn't get its way. But also, there was no real negotiating done here. Not even an effort.

Next, on the issue of the snapped-back sanctions themselves, the Wall Street Journal says, "this is another case when the United Nations is more obstacle than ally to US interests." 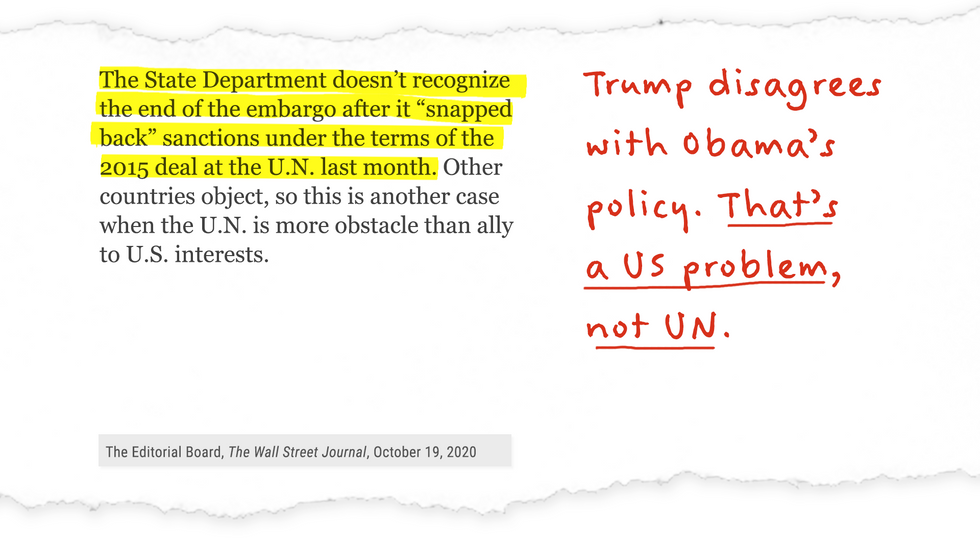 And finally, the editorial board asks, "How is Mr. Biden going to contain Iran's regional imperialism and support for terrorism without an arms embargo?" 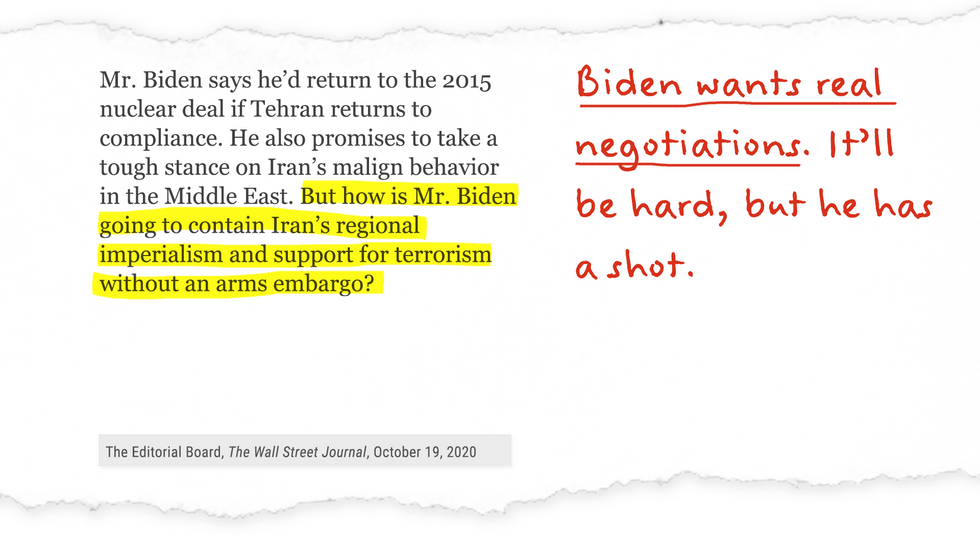 Well, one thing here is Iran is not going to go on a tank and fighter jet spending spree like it's Black Friday at Costco, because Tehran doesn't have the cash and they also don't want more sanctions right now—and neither do Iran's allies China and Russia. Let's keep in mind, the Iranian economy is in parlous condition right now. In part because of mishandling coronavirus, but in part because the United States has pushed much tougher sanctions against Iran.

So, I mean, the ability of the Iranians to go and spend a lot on the military now is significantly less than it was when the Iranian deal was struck with the Obama administration. To the broader point of getting back to an acceptable nuclear deal—far more important than conventional arms—sure, it's going to be messy. Not at all convinced that it is going to happen. But Biden will have international support. Remember, the United States left the nuclear deal unilaterally. Every one of America's allies that were confederates in getting the deal done, opposed that from happening. And they've got a better shot at getting back than the United States does right now.

I'd also say on that introductory point about this concession being a flaw of the 2015 agreement: Deals involve tradeoffs. They are about bargaining. Keeping Iran away from a nuclear bomb was the goal, pushing that capacity off for a decade or more, and was considered a higher priority than the arms embargo at the time.

Different people can have different judgements on that one, but it is how diplomacy works.