America is still a democracy post-Trump, but is it a healthy one?

December 11, 2020
GZERO Media
America is Still a Democracy Post-Trump, But is it a Healthy One? | The Red Pen | GZERO Media
youtu.be

Ian Bremmer and Eurasia Group's Jon Lieber, Jeffrey Wright, and Clayton Allen are taking the Red Pen to an op-ed by Eric Posner, an author and law professor at the University of Chicago. It's titled "America Passed the Trump Stress Test" and was published recently by Project Syndicate.

Professor Posner's argument is basically this: sure, President Trump has violated norms and challenged legitimate election results, but in the end, no real harm done to American institutions, or America's democracy itself. Now it's certainly true that Trump's behavior hasn't led to meaningful policy change, but Posner is blowing the whole thing off as a, "Nothing to see here, no big deal," moment. And we think it's a bit more serious than that.

First, Posner writes, "While many Republican voters tell pollsters that the election was stolen, hardly any of them have taken to the streets or pursued tactics that one would expect from people who truly believe that democracy has been subverted. There has been no Hong Kong style uprising. Trump's attacks on American institutions are largely a form of political performance art."

Okay. For starters, it is obvious that the US democracy has withstood Trump's challenge of the election results, and refusal to concede. Heck, that's my whole, "Don't panic," shtick, but that's a low bar. Trump has also in the process, reshaped the Republican party and accelerated the deep partisanship that has nearly destroyed the possibility of compromise in Washington. You do actually need legislation to get done in a country. Further, Trump isn't going anywhere. I mean, we'll see how Twitter treats him in his days, post Pennsylvania Avenue, when we all know he's still going to be tweeting, and he's still going to be talking to his base.

Next, on the matter of civic discourse and participation throughout the election, Posner writes, "Despite the hardships and constraints of the worst health crisis in a century, people donated money to candidates, argued with each other online, organized on a massive scale, notwithstanding the conspiracy theorizing, polarization, and persistent sense of turmoil. These are signs of a healthy democracy."

May I remind you, Eric, that a majority of Trump voters don't think that Biden legitimately won, and the voting system was seriously stretched; hours long waits, mail-in ballot hiccups and the like. Look, America is surely a democracy, but saying that the American democracy is healthy? Most Americans don't think so, most foreigners too. That's a problem. I'd also point out that Trump's attacks on the legitimacy of the election have reinforced distrust in the system, particularly among his own 70 plus million supporters. That isn't the sign of a healthy democracy either.

Finally, Posner writes of Trump's hope of overturning the election results, "Perhaps," he says, "If enough voters took to the streets and enough officials calculated that a grateful Trump would award them with future Senate cures, these officials would have delivered for him, but that didn't happen." 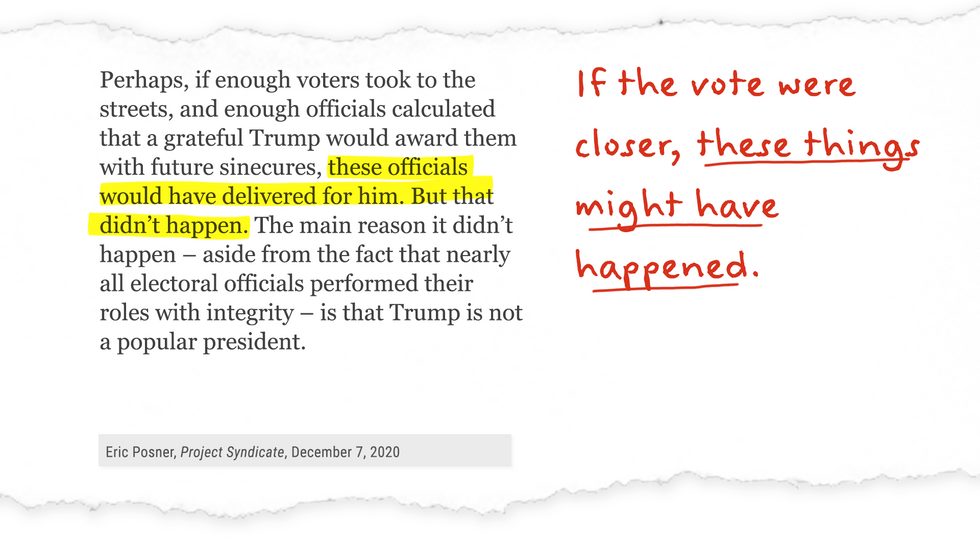 Actually, it didn't happen because the election wasn't close enough to rig in key swing States, but President Trump has created the toxic environment for all of these things to happen, following a potential closer vote. So, yes, overall, it's true that a concession would be nice, but it's not at all necessary for a transition of power to happen; Biden will be ascending to the presidency on January 20th, I have no doubt at all. And yes, American democracy still stands, but Trump's throwing out of conventional norms is not something to simply shrug off. US political institutions have been eroding considerably over the past decades, and that erosion has only accelerated under, and because of President Trump, it doesn't matter that Trump refused to show up at the White House Correspondence Dinner; I could care less. Refusing to release his tax returns. That's another matter. And Trump's overall strategy was not about shaking up Washington, so much as advancing his own personal interests and abusing American power. And that should not be ignored.
the red penian bremmerjon liebertrumperic posnerdemocracyUS PRESIDENTIAL ELECTION 2020ELECTIONSrepublicansdemocratspartisanshipus political system