Should the Biden administration "reverse course on China" in the hope of establishing a friendlier relationship, as diplomat Kishore Mahbubani argues in a recent Financial Times op-ed? Ian Bremmer and Eurasia Group analyst Michael Hirson take out the Red Pen to explain why it's not that simple.

And today, we are talking about the United States and China. The relationship between the two most powerful nations in the world is the worst it's been since the Tiananmen Square massacre in 1989. Pundits and policymakers alike all around the world are trying to figure out how Washington and Beijing can at least stop the bleeding because a reset is nowhere in the cards.

That's the topic of the op-ed that we are looking at today. It's from the Financial Times, written by Singaporean diplomat Kishore Mahbubani, and the title summarizes the key argument: "Biden should summon the courage to reverse course on China." Meaning, he should throw out the Trump era approach and open the door to more cooperation and kinder, gentler relations.

Now, first of all, truth in advertising, Kishore is former ambassador to the UN, former dean of the Lee Kuan Yew School – it's like the Kennedy School but of Singapore, and a decidedly good guy. We've known each other for decades, heck, I even blurbed one of his books. But is that going to stop us from adding red ink to the Pink Paper, the Financial Times? No, sir! Let's get out that pen.

So first, Kishore cites the late American diplomat and strategist George Kennan, always a good thing to do in an op-ed, who wrote during the Cold War that the United States should aspire "to create among the peoples of the world generally the impression of a country which knows what it wants, which is coping successfully with the problem of its internal life and with the responsibilities of a world power." And Kishore says that China is checking all these boxes right now and the United States is not. He mentions things like declining life expectancy and mounting income inequality as woes that are undermining America's standing.

And I admit that China certainly seems to know what it wants. But China has massive internal structural problems of its own, including demographic decline and massively growing pollution. So long as Beijing is interning Uighurs en masse, and cracking down on democracy in Hong Kong, or alienating most of the world's advanced democracies with a belligerent foreign policy, that argument of Kennan's is a tough sell to apply. 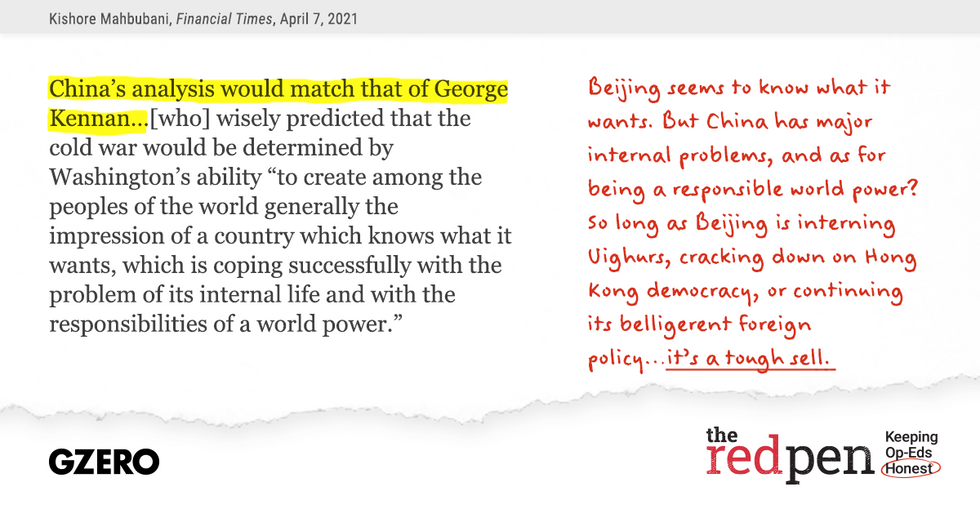 OK, next Kishore argues that "the US cold war strategy" won't work to isolate China.

That's right, a cold war strategy won't work. But the United States isn't using one. China is too deeply embedded in the global economy, and the United States isn't expecting China to have a Soviet-style collapse. No one in the Biden administration thinks that. It's actually trying to balance decades of cooperation with growing competition. Now there are some people out there that say the United States is in a cold war with China, like Niall Ferguson. But we're not and they're wrong. And that's a whole different Red Pen. Next week we can cover that one. 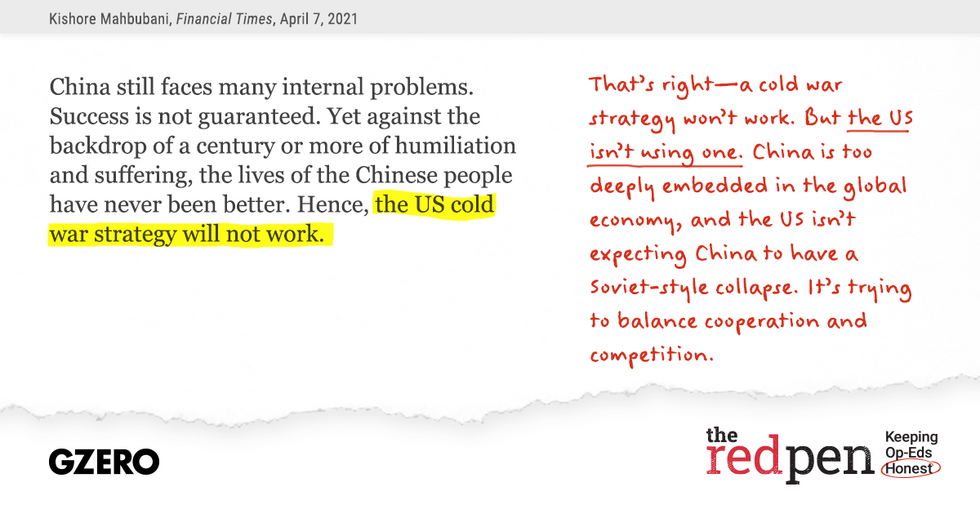 Mahbubani, Kishore also writes that "the Chinese people can see that their government has protected them well in the Covid-19 emergency."

Now, it's also certainly the case the United States absolutely blew the pandemic response for some time. But today it is administering far more vaccine doses and far more quickly than has China. And China's vaccines don't work so well. And let's also not forget how one government's mismanagement hastened the spread of a global pandemic. Hint, it's not the United States. 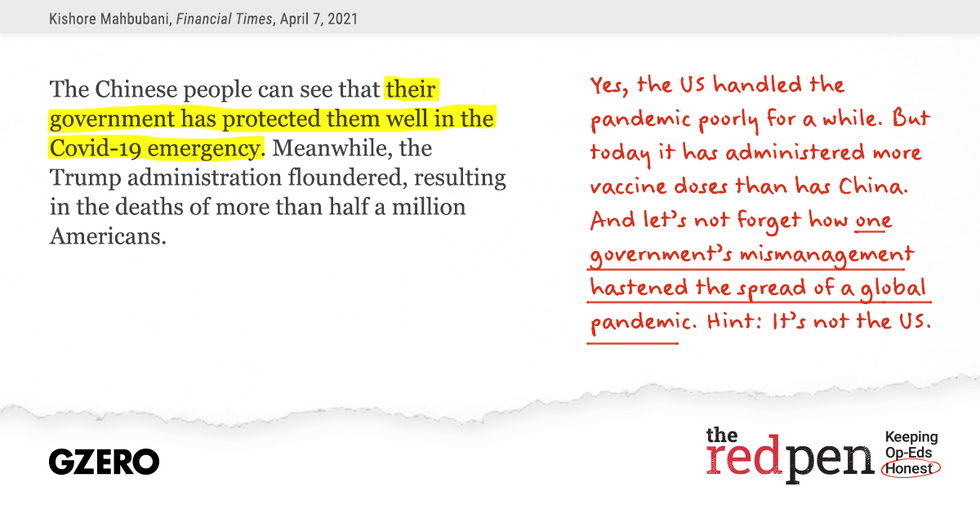 Fourth point, Kishore writes that Biden is "making a strategic mistake" he says, "in carrying on with Donald Trump's policies towards China." He adds that Biden should declare "that Trump was wrong on China."

Never mind that that would be horrible domestic politics for Biden but a broader question, was Trump really wrong about the long-term challenge in the United States-China relationship? I mean sure, his policy implementation was erratic, and Trump's tweets generally sucked. The Biden team realizes it's going to have to compete with Beijing in a much more disciplined and coordinated way than the Trump administration. But China's deepening authoritarianism and increased power and presence on the global stage has meant that the United States was eventually going to recalibrate policy, whoever the president. That's why China policy is one of the very few issues in the United States right now that has broad bipartisan agreement in orientation. 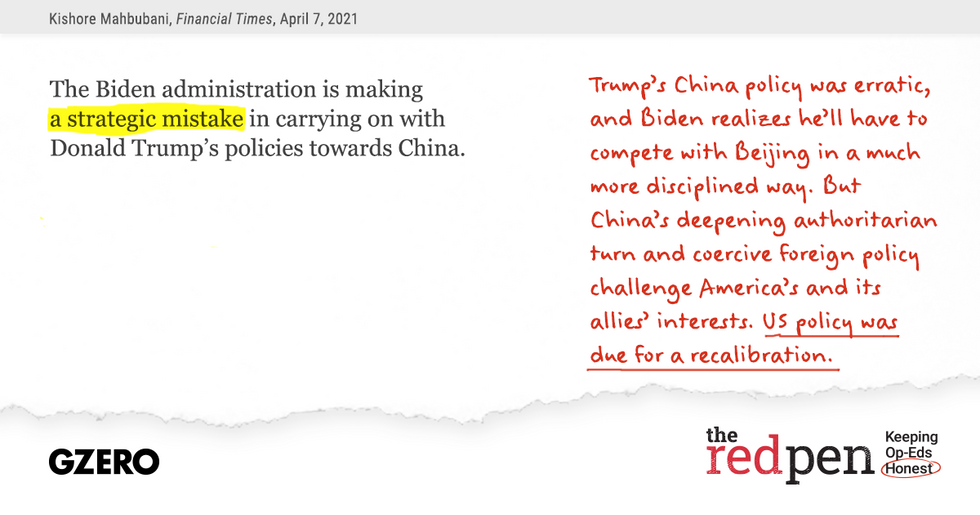 Finally, Kishore says that Washington "should press the pause button on the US-Chinese geopolitical contest."

If only it were that easy, Kishore! It takes two to tango. If China is willing to do so, a pause may be possible. But there's no sign of that at this stage at all.

That's your Red Pen for today, folks. We'll see you again soon with another edition. Have a suggestion for a piece we should take our pen to? Tweet it out to @gzeromedia using #TheRedPen and we'll check it out.