Europe's "clear vision" for relations with China is one-sided

Does the European Union have a better plan for dealing with China than the US does, as Bruno Maçães argues in his latest op-ed for Politico Europe? While there are differences in how the EU and US are approaching Beijing, the EU's plan to separate politics from economics isn't quite working out the the way Maçães describes. Ian Bremmer and Eurasia Group analyst Charles Dunst take out the Red Pen to take the other side.

Today we are taking our Red Pen to a piece from Politico's "Geopolitical Union" column. It's written by former Portuguese Secretary of State for European Affairs and author Bruno Maçães. Disclaimer for you, Bruno is an exceedingly smart dude, who I happen to really like. I read him all the time. But that doesn't stop us from taking the red pen to this piece.

It is titled, "Surprise! The EU knows how to handle China." That would be a surprise. Bruno argues that the European Union is ahead of the United States in handling its relationship, both political and economic, with the People's Republic.

Obviously, a big goal of President Biden's first major trip abroad, we talked about it a lot here, meeting with the G7, NATO, and European leaders, the EU, was to push for Europe to get onboard with a tougher stance on China. Kind of like they are trying to do with the Quad across the Pacific. And there is a disparity in how the EU and US are approaching Beijing right now, that's clear. But we don't agree with Bruno on the reasons.

First, Bruno dismisses the notion that Europeans are "reluctant to get on board with Biden's efforts" because they simply don't want to confront China. Rather, he says, "they have a plan of their own.".

Several European countries have made it pretty clear that they don't want to confront China at all, let alone in the strong way that the United States, whether Trump or Biden, has been. While Brussels is growing increasingly apprehensive of Beijing, agree with that, June's G7, NATO, and US-EU summits all underscored that few of the EU's members are prepared to challenge China comprehensively in any way. 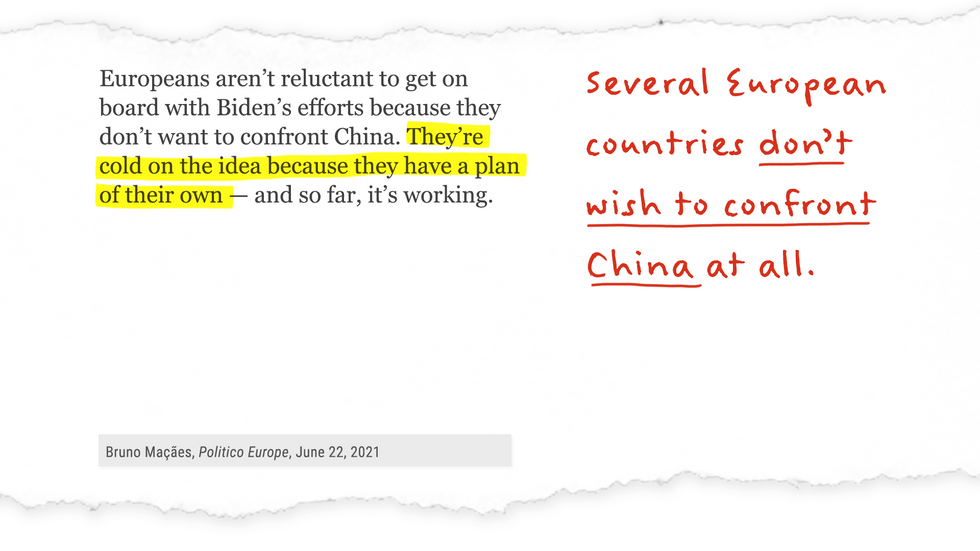 Next, Bruno praises the EU's "plan" for dealing with China, writing that the European Commission and the European External Action Service drafted "a bold [China strategy] that never traveled to national capitals for assent."

But the EU's plan appears to be grounded in a hope that "politics and the economy can be insulated from each other." Unfortunately, as Bruno himself explains, China makes "no separation between market and state." Indeed, it leverages its economic ties for political aims. Remember when China imposed tariffs, started a trade war, on Australian goods after Australia called for an investigation into Covid-19's origins? You can't just unwind the politics versus economics. And it's getting harder to do as China gets more powerful.

Plus, if EU member countries had no say in the plan that Brussels penned, then how can we credibly speak of "the European response" to China? The truth is that there really isn't a coherent response. Hungary, for its part, has become China's closest partner in the bloc, vetoing EU statements that are critical of Beijing. Sweden, on the other hand, continues to hammer China on human rights abuses. Do both really subscribe to the same European-China policy? I'm skeptical on that. 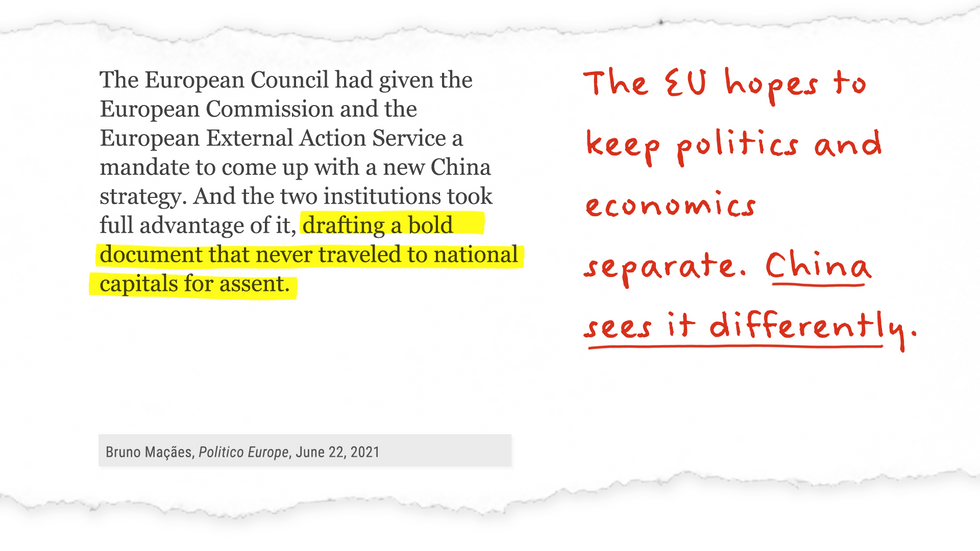 Third point: In explaining the collapse of the Comprehensive Agreement on Investment (CAI), a major potential deal between the EU and China, (they gave their thumbs-up on after Biden was elected, before he became inaugurated, a big to-do in the United States), Bruno cites a Chinese scholar's lament that the EU has the upper hand in dealing with China, giving Beijing little choice but to accept penalties Brussels imposes.

If Beijing really felt that pressure, why did it "put its foot down" and "kill the investment agreement?" We'd argue that China's leadership increasingly actually believes that the West is in irreversible decline, much more significantly than after the global financial crisis of 2008-2009, and that because of China's growing economic heft and technological capacity, which is significantly greater than that of the European countries right now and will continue to be, they don't need to yield to European pressure. The EU may assume that China will come back to the table on European terms, but Beijing probably won't feel much urgency to return. 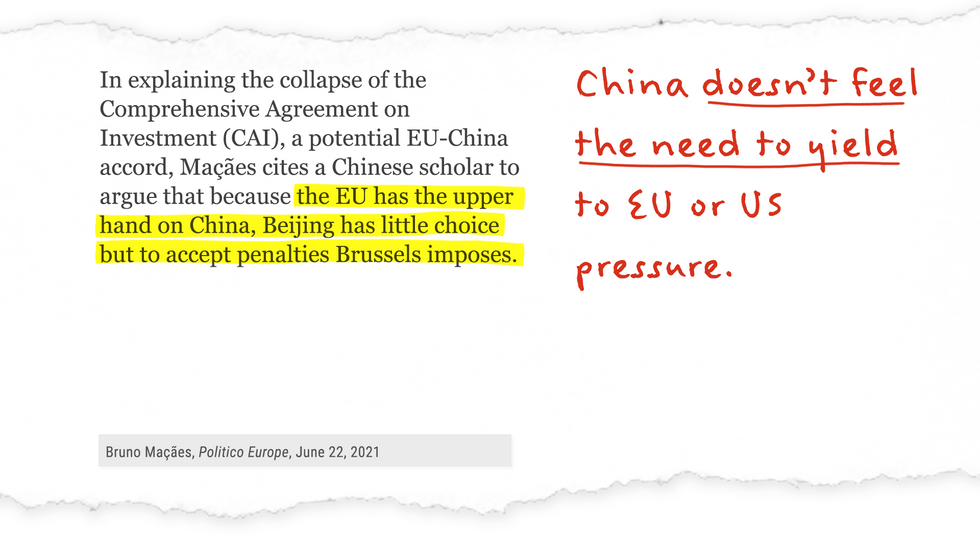 Finally, Bruno concludes that Brussels "has a clear vision of what the terms of the relationship between the West and China should be: economic integration but on a European not a Chinese model."

But bottom line here is that China doesn't share that vision. Brussels is going to continue to struggle in its relationship with Beijing if it intends to preserve a boundary between politics and economics. And this is a core difference. The back-and-forth battle between the European Parliament and China over sanctions and countersanctions, a tit for tat over punishing China for treatment of the Uyghurs and China firing back by sanctioning European parliamentarians and think tanks, led to a freeze in the ratification of the CAI. The EU can't unilaterally separate politics and economics when dealing with China. For the relationship to operate on these dual tracks, both sides need to accept the boundary. And Beijing doesn't.

Anyway, that's your red pen for today. Have a look at Bruno's piece, see which side you come out on. We'll see you again soon. One thing we can all agree on, the European and China have a great 4th of July weekend. See you soon.

How to solve Colombia's cocaine problem

Why Iran’s protests are different this time

Money on the move