In his latest Financial Times op-ed, Martin Wolf argues that the US global role is at stake in this election and that a Trump re-election would undo America's legacy of democratic leadership in the world. Ian Bremmer and Eurasia Group's Jeffrey Wright grabbed the Red Pen to argue that a Trump presidency exists in part because of Americans' rejection of the US's post-war leadership role, and these feelings run deeper than the article suggests.

Today, we're taking The Red Pen to a recent op-ed published in The Financial Times from my good friend, the chief economics commentator Martin Wolf. Martin argues the global role of the United States is at stake on November 3rd, and that a Trump reelection would undo America's legacy of democratic leadership in the world. There's been a lot of this sort of thing recently. I know, we did it once, but if we do it twice, it's all over and I'm not there. To be clear, we don't totally reject what Martin is presenting in this piece. Rather, we'd argue that a Trump presidency exists because there were feelings that were present in the United States before he came along and they run a lot deeper than the article suggests. In other words, it's really not all about Trump.

First, Martin writes about America's long history as a leading model of functioning democracy, a leader among nations that share its values and essential player in resolving big global challenges. To quote, "The reelection of Mr. Trump would signify a rejection of all three roles by the American people," he writes. Let's bring out that red pen, this misses a larger point. Many Americans have already rejected those roles. Two decades of wars, trade agreements that have left working people behind and a feeling that other nations were just freeloading and letting the US be the world's policemen. That didn't start with Trump. 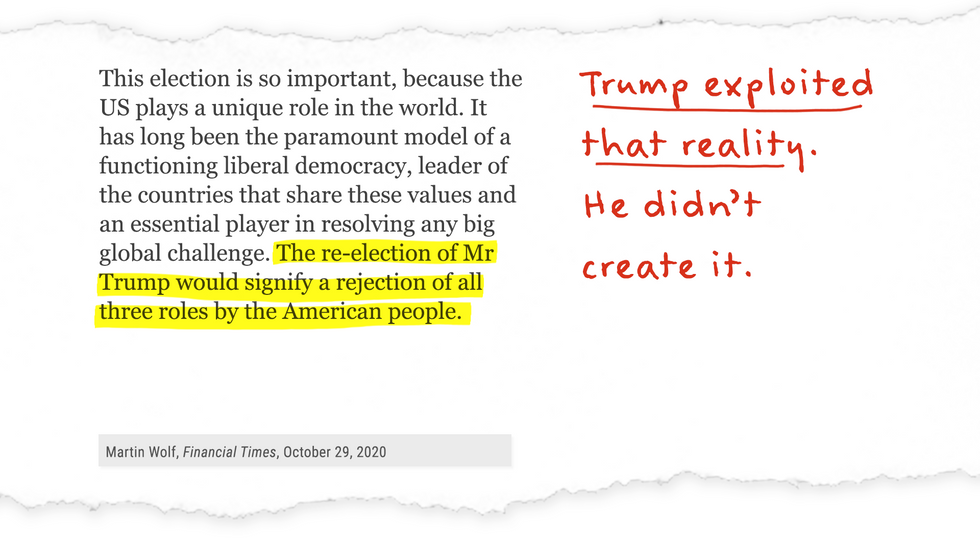 Irrespective of whether you agree with the perspective or not, it's been growing any United States with massive levels of inequality and large numbers of Americans that feel like the system doesn't work for them, and that includes first and foremost, how America has projected its power internationally. Don't you remember on the other side of this equation just how many US allies were saying that the Obama-Biden team were leading from behind? Again, didn't start with Trump. Martin sees the president as a threat to US leadership in the world. But a lot of Trump's supporters think he's just standing up for them and not letting other countries take advantage of the United States.

Next, is Trump's goal to do whatever he likes, laws be damned? Martin writes, "He wants to be an autocrat. If he wins again, he may largely achieve his aim." Disagree. Trump wanting to be an autocrat and Trump actually having that capacity, not to mention competence, are two radically different things. Trump focuses more on tweeting and petty grievances than actually consolidating power. Heck. Remember, when the biggest crisis of not only his administration, but my lifetime came, coronavirus, that would have given any president the chance to consolidate power, emergency rule, really take control in the United States, President Trump wanted none of it. He said, "Not my responsibility. The states are in charge." That isn't someone who's about to become an autocrat.

Many American political institutions have eroded not only under Trump, but over the past 30 years. Congress, the executive, the bureaucracy, the mass media, and indeed American elections. I'd argue the American judiciary and the military largely are as strong as they have been, and that process has indeed sped up under four years of Trump. It's been a long time since the United States has truly led by example. Other countries don't look at the US today and say, "We want our government to run like that," and that's also true of the United Kingdom, by the way. I mean, we aren't Canada, we're not Germany, we're not the Nordics, and it's true that we will slip further away faster under a potential second Trump term. But autocracy is not a potential outcome of this election.

Finally, Martin writes that Trump is indifferent to pass promises, rejects multilateralism and happily pulls out of commitments, such as the Paris Climate Accord. Sure. Trump has been louder and prouder about this. It's true, though, you can't exactly say that the Iraq War was a group effort. Look, to that larger point, I think that Martin paints an overly rosy picture of American democracy of yore. FDR gets credit for saving democracy globally as the article points out, but systemic racism abounded in the US and still has a ways to go today. During World War II, Japanese Americans were held in prison camps.

Look, a Biden presidency will end up being a lot more similar to Trump on foreign policy than the establishment thinks, both because he'll be in part more aligned than they think, and in part, because he'll be more constrained than they think, and that's in part because the world has changed and in part because the United States has.

Speaking of that, be sure to vote if you haven't already. That's your Red Pen for this week. Stay safe and avoid people.