US-China relations can be improved under Biden, but geopolitical rivalry & human rights can't be ignored

In their latest op-ed for Project Syndicate, Javier Solana and Eugenio Bregolat stress the importance of the US and China not becoming staunch enemies - but the piece also avoids some uncomfortable truths about the US-China competition. Ian Bremmer, along with Eurasia Group analysts Michael Hirson and Jeffrey Wright, grabbed The Red Pen to clarify a few points re the US-China relationship.

Today we are taking our Red Pen to an op-ed from Project Syndicate, always gets distributed globally, written by two veteran Spanish diplomats, Javier Solana and Eugenio Bregolat. Among their many accolades, Solana served as Secretary-General of NATO and Bregolat was Spain's ambassador to China. So, not too shabby. And full disclosure, Javier is actually a dear and longstanding friend. So, I'm biased. But that doesn't stop The Red Pen.

Their article is titled "Biden Can Pass His China Test," and it focuses on what will be the most important foreign policy challenge that Biden will face as president, America's relationship with China, the second most powerful country in the world. The authors argue that under Trump that relationship deteriorated significantly, all-out battles over technology, trade, human rights, and even a giant global blame game over the coronavirus pandemic.

The piece makes solid points about the importance of the two nations not becoming staunch enemies. Their cooperation on everything from climate change to nuclear proliferation to cyber norms no doubt will be critical in the coming years. And we agree that the Trump administration's approach, particularly its rhetoric, requires recalibration in the Biden presidency. But the piece also avoids some uncomfortable truths about how difficult the road ahead is going to be in US/China diplomacy.

So first, Solana and Bregolat argue that "despite their obvious rivalry, the United States and China must try to understand each other" as they seek peaceful coexistence.

Now, let's be real: The rivalry between these two nations isn't about a failure to listen to one another. It's a geopolitical competition, particularly in and over Asia (though it's increasingly global) to dominate commercial sectors like technology and also increasingly zero-sum direct security concerns. Talking helps, absolutely, but won't change that underlying reality. 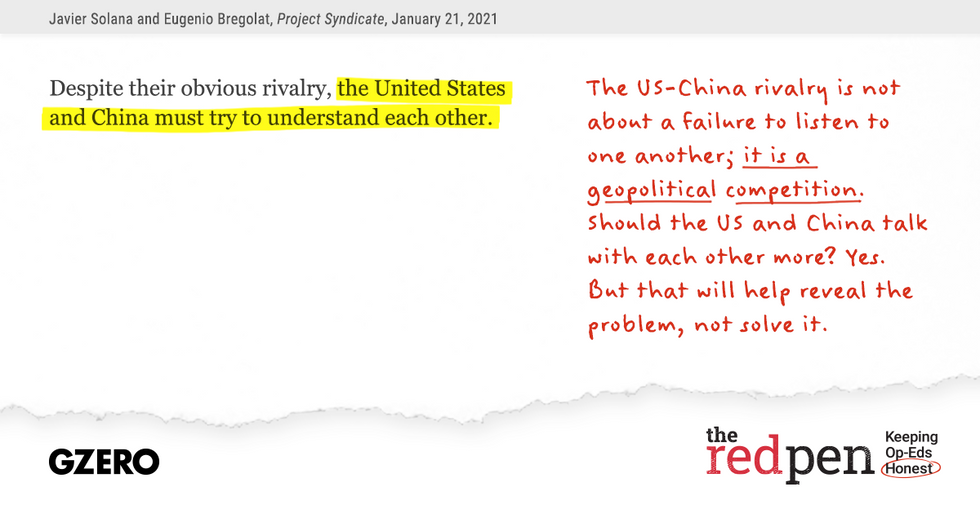 Next, the authors urge Biden to promote democracy and human rights in a "calm, consistent, and sensible manner" and avoid "trying to impose values."

Never mind the fact that actually, Trump himself did virtually none of that, but calling for regime change in China is clearly not a sensible strategy. But neither is ignoring our values or Western values. And the United States can urge China to adhere to basic human rights standards without also demanding it become a liberal democracy. Treatment of Uighurs is at the top of the list. As is breaking the "one country, two systems" promise in Hong Kong. These things can't be swept under the rug, by the Americans or our allies across the pond, for that matter. 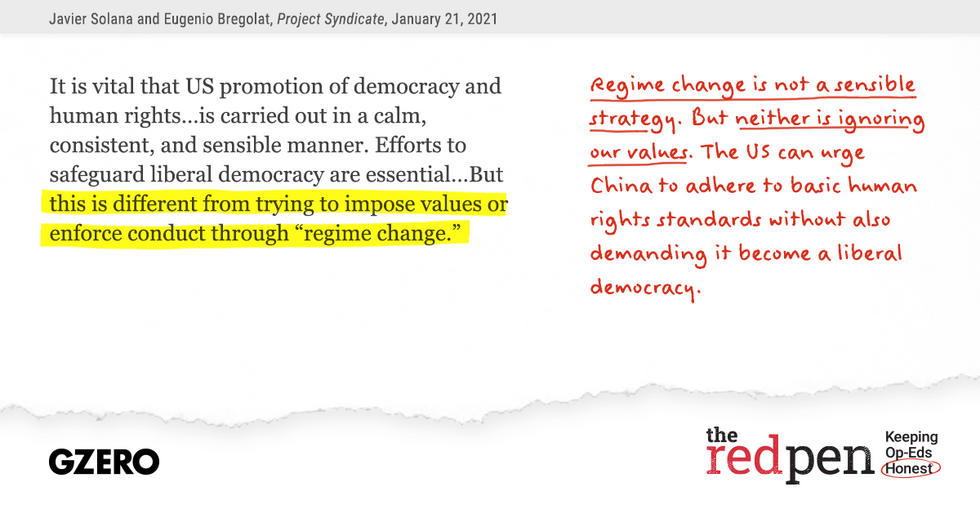 Solana and Bregolat also write that "a relationship built on cooperation and competition must exclude the open confrontation sought by Trump and his hawks."

And here, I want to say that Trump's strategy, while in many ways' imperfect, actually also held some truth. Relying on engagement alone, which is what we mostly saw under the old Obama administration, wasn't working to shape Chinese behavior. The smartest people on Team Trump and Team Biden both recognize that confrontation on some issues is necessary. Indeed, in overall policy orientation, Team Biden and Team Trump probably closer and see eye-to-eye on China than any other foreign policy issue. 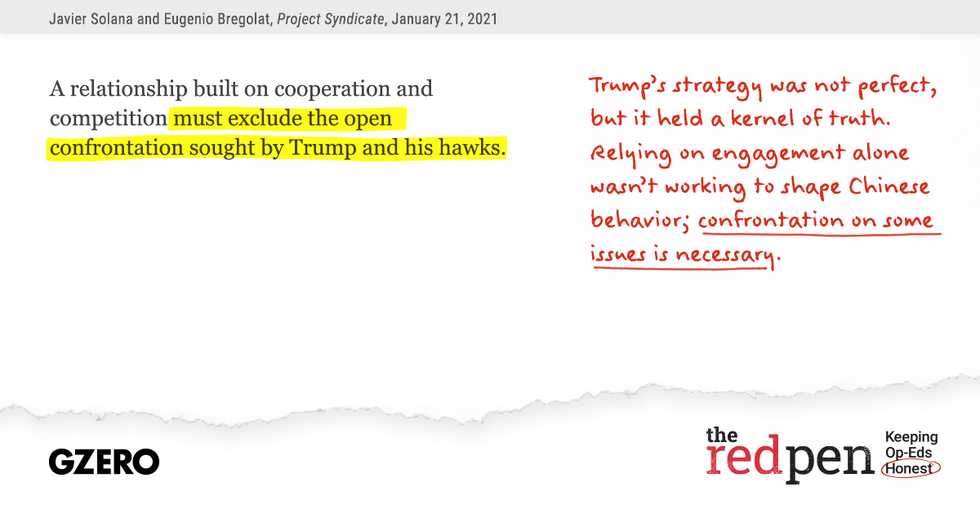 Finally, Solana and Bregolat say that the EU is exercising "strategic autonomy" by developing "an ambitious agenda for collaboration" with Biden while also "concluding a comprehensive investment agreement with China."

Yep, Europe is a significant part of the equation here. But just as the EU doesn't need to slavishly follow the United States, it also shouldn't sign a last-minute deal with China and expect a pat on the back from Washington. Europe has just as much stake in preserving the liberal international system as does the United States, even though that is getting harder and the support for it is eroding. 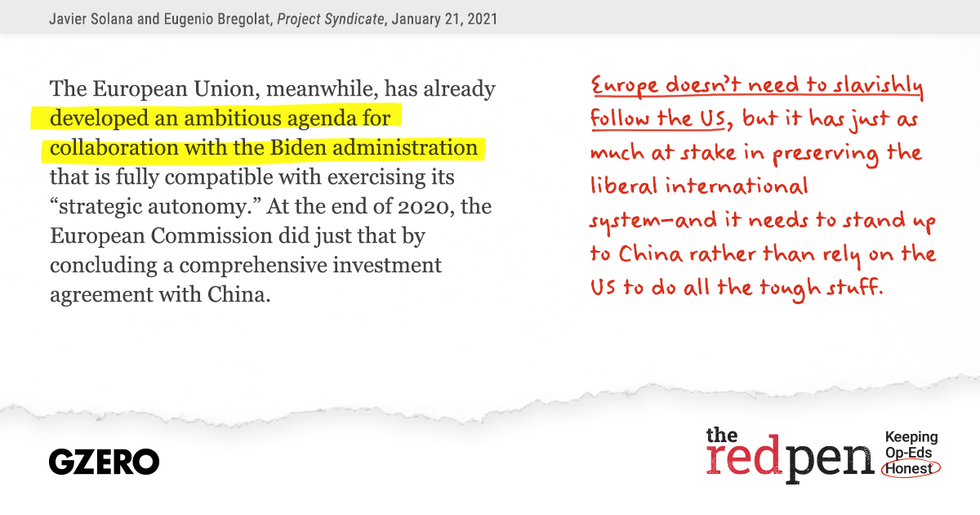 Well, there you have it, that's your Red Pen for this week. We will have much more to say about the US and China in the coming months, that is for sure. Stay tuned.