Multinational corporations aren't about to give up on global business

An op-ed in the Financial Times argues that the era of borderless enterprise may be past, thanks to rising geopolitical tensions between the US and China. In "Geopolitics spells the demise of the global chief executive," Elisabeth Braw writes that the nationalities of companies and their chief executives now matter again and their ability to pursue a truly global business strategy will be limited. But has the situation actually changed? Ian Bremmer and Eurasia Group analyst Charles Dunst take out the Red Pen to explain that nationalities have always mattered, and many of these risks aren't new.

Today we are talking about the impact that increasing geopolitical tensions could have on big, multinational corporations. In a recent op-ed for the Financial Times, Elisabeth Braw of the American Enterprise Institute, AEI, argues that we could be entering a distinctly new chapter in global business, one in which where a company comes from matters much more. In other words, a move away from borderless companies and toward nationalism.

She cites CEOs like Ramon Laguarta of Pepsi and Satya Nadella of Microsoft, both foreign-born executives leading American companies, as a positive trend of globalization that may come to an end in the current political reality.

It's an extremely interesting and provocative piece. You should definitely read it.

We are not convinced. Let's get out the Red Pen.

First, Braw writes that "the era of borderless enterprise may be past" and argues that "suddenly companies', and executives', nationalities matter again." 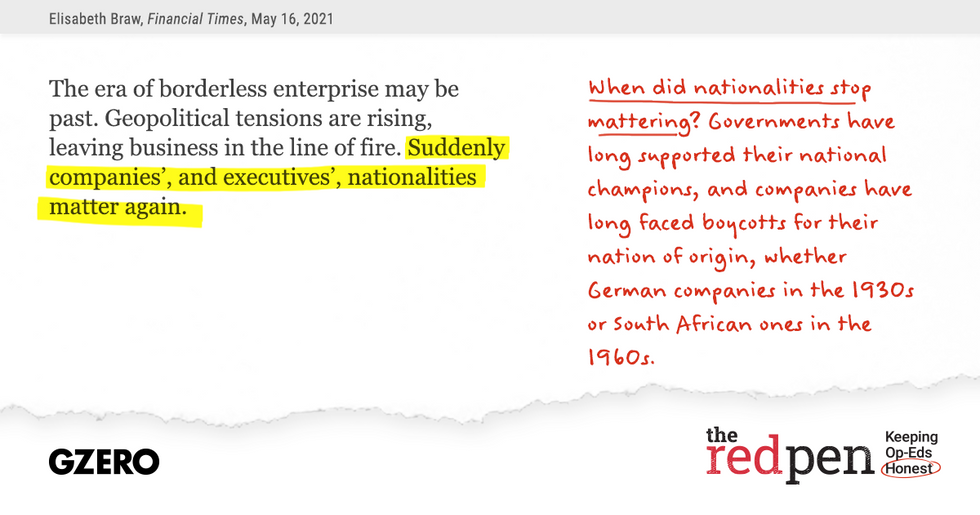 So question, when did nationalities stop mattering? Governments have long supported their national champions. In the wake of the 2008-09 financial crisis, the German government spent 1.5 billion euros to bail out their auto industry. BMW, for one, might have had non-German higher ups, but when the rubber met the road, it mattered the most was that BMW was a German company. The era of the globalization never meant an end to national pride or responsibility when things got tough.

Secondly, the number of foreign CEOs of Global Fortune 500 companies has remained pretty constant since the 2008 financial crisis. I'd also point out that as of 2019, the last date we could find good numbers for, 45% of the companies on that list were founded by immigrants or the children of immigrants. No real change.

Next, Braw suggests that Western corporate titans may now conclude that the companies they run "should be loyal not just to their shareholders but to the company's home country if it provides democracy, rule of law and a safe business environment." 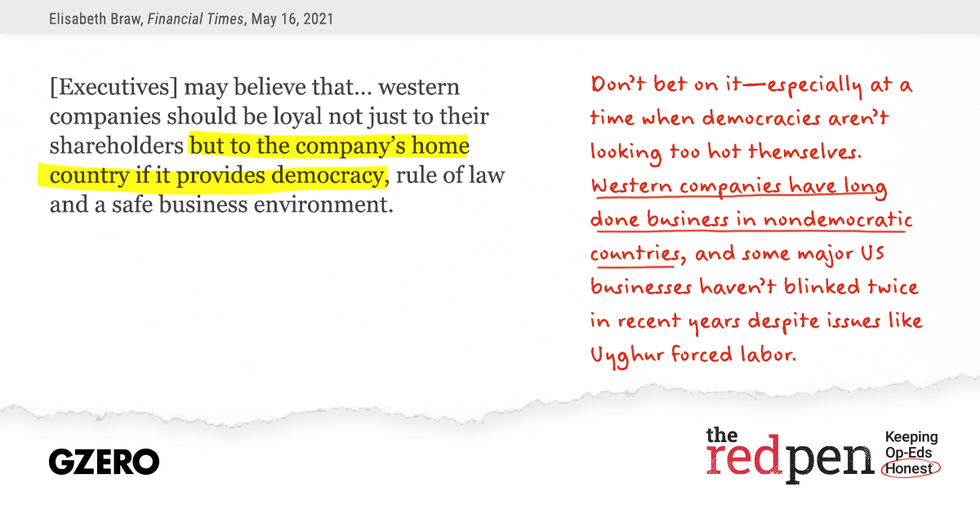 I'm not ready to bet on that. Western companies have long done business in nondemocratic countries, and some major US businesses haven't blinked twice in recent years even on issues like Uighur forced labor. In fact, China overtook the United States last year as the top recipient of new foreign direct investment. Goldman Sachs just announced an expansion of its staff there by 2024. Amazon, Apple, Nike, Gap…the list goes on. Still doing business and expecting growth in China.

Finally, Braw writes that "executives may consider themselves citizens of nowhere, but a business can be harmed because of where it is based."

That's true. But is that risk new? There were boycotts of German companies in the 1930s, of course, and the same in South Africa during Apartheid in the 1960s.

Yes, Apple and Google are enthusiastic citizens of nowhere. But not so much for Microsoft and Amazon, which are increasingly US national champions.

In conclusion, do rising tensions between, say, the United States and China mean that a new era of business with borders is on the horizon? A Standard Chartered report, just from a couple of months ago, back in March found that of multinational corporations based in the United States, the United Kingdom, France, and Germany, 42% "see their best growth opportunities outside of their home market." That's actually "5% higher than six months ago."

Walmart is paying 100% of college tuition for eligible associates

Since 2018, the Live Better U program has helped prepare more than 52,000 associates for careers at Walmart or wherever their professional ambitions take them. Now, Walmart will pay 100% of college tuition and books for eligible associates. This means approximately 1.5M associates can earn college degrees or learn trade skills without the burden of education debt. Learn more.

Afghanistan has now become what the UN is labeling the planet’s worst humanitarian disaster. Indeed, last week the world body issued its largest-ever donor appeal for a single country to battle the worsening crisis there, caused by freezing temperatures, frozen assets, and the cold reception the Taliban have received from the international community since they took over last summer.

Governments around the world are offering creative incentives for getting a jab.

If you happen to live in New York and are one of the city’s 18% of unvaccinated residents, now might be a good time to go get jabbed. But not just because of omicron.

In late December, now former NYC Mayor Bill De Blasio announced the city would start offering gift cards, free roller coaster rides on Coney Island and trips to the Statue of Liberty to those who get their shots. And it’s not just the Big Apple.

As infections jump, vaccination incentive programs have been brought back around the world. Officials in vaccine-hesitant Missouri have earmarked $11 million dollars for gift cards worth $100. Vermont is awarding schools with per-pupil bonuses if they hit rates higher than 85%.

China's mounting problems. Xi Jinping is not off to a good start in 2022. First, Chinese economic growth slowed down to 4 percent in the last quarter of 2021, almost a percentage point less than the previous period. While annual GDP was up 8.1 percent year-on-year, beating government expectations, the trend is worrying for the world’s second-largest economy. Second, annual population growth fell in 2021 to its lowest rate since 1949, when the ruling Communist Party took over. Although Xi probably saw this one coming, he's running out of ideas to encourage Chinese families to have more children — which the government needs in order to sustain growth and support the elderly over the long term. Third, and most immediate: the upcoming Beijing Winter Olympics canceled ticket sales for domestic spectators — foreigners were not invited — as the more transmissible omicron variant has driven up COVID infections in China to the highest level since March 2020. It's only the latest sign that Xi's controversial zero-COVID policy is setting itself up for failure against omicron without mRNA vaccines. What'll it take for China to reverse course?

100,000: We're still waiting for news from the Pacific nation of Tonga, two days after a massive underwater volcanic explosion triggered a tsunami that was felt thousands of miles away and sent a plume of ash 100,000 feet into the sky. With communications mostly cut off, Australia and New Zealand have sent airplanes to assess the damage.

Omicron is here. The bad news is that it's more contagious. The good news is that mRNA vaccines work against death and hospitalization. COVID may soon become endemic in some parts of the world.

Not in China, where Xi Jinping's zero-COVID approach faces its toughest test to date with omicron. Why? Because China lacks mRNA jabs, and so few Chinese people have gotten COVID that overall protection is very low.