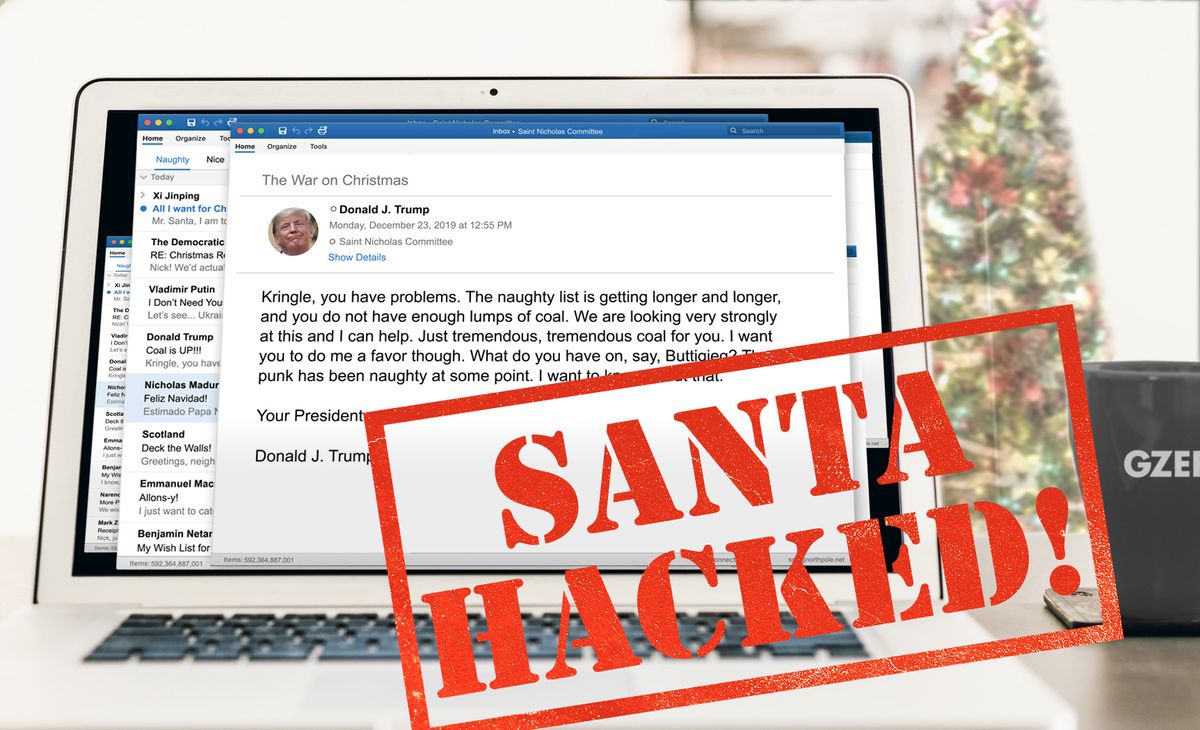 Bad news, Christmas fans: Santa has been hacked! Your GZERO correspondents were just settling down for a long winter's nap when we stumbled on this trove of stolen emails from the servers of the SNC (Saint Nicholas Cooperative.) Here's what the world leaders you know, love, and loath are asking for this Christmas:

Xi Jinping – Mr. Santa, I am told you have lists. Lists of those who follow rules and those who do not. If you want continued access to the factories of the People's Republic (which, of course, produce far more cheaply than your elves), we require you to share this data with us. Also, as I see you are in the surveillance market, perhaps we may offer you enhanced tools that can help to make your nice and naughty lists much, much more… detailed.

Donald Trump – Kringle, you have problems. The naughty list is getting longer and longer, and you do not have enough lumps of coal. We are looking very strongly at this, and I can help. There will be tremendous, tremendous coal for you. I want you to do me a favor though. What do you have on, say, Buttigieg? That punk has been naughty at some point. I want to know about that.

The Democratic National Committee – Nick! We'd actually like to know about your returns policy. You see, we thought Donald Trump's candidacy back in 2016 was the greatest gift imaginable for us. Just let us know where we can drop him off.

Vladimir Putin – Let's see… Ukraine… Syria… US elections. Being naughty seems to have paid off quite handsomely over the past few years. I have nothing to request of you.

Nicolas Maduro – Estimado Papa Noel! Juan Guaido's fizzled insurgency is pretty much all I could have asked for this year – gracias! But if you're still feeling generous, please leave my top generals a nice bottle of rum, top up their offshore bank accounts, and tell them it was from me.

Scotland – Greetings, Saint Nick! This year, we're in the market for a big, beautiful wall along our southern border.

Emmanuel Macron – Cher Santa, I would like very much to catch a train, any working train, out of town.

Benjamin Netanyahu – I know, I know. But US evangelicals love me so much I'm hoping you'll read this anyway. This Christmas/Hanukkah, I'd love a strong margin of victory in my Likud party's upcoming leadership contest, and if you're feeling extra generous, a win in next year's elections: Did I mention that I'm allergic to courtrooms?

Mark Zuckerberg – Nick, just following up: you got the naughty/nice data on all 2.4 billion of our users in time, yes? Pls confirm.
the lead
Eni