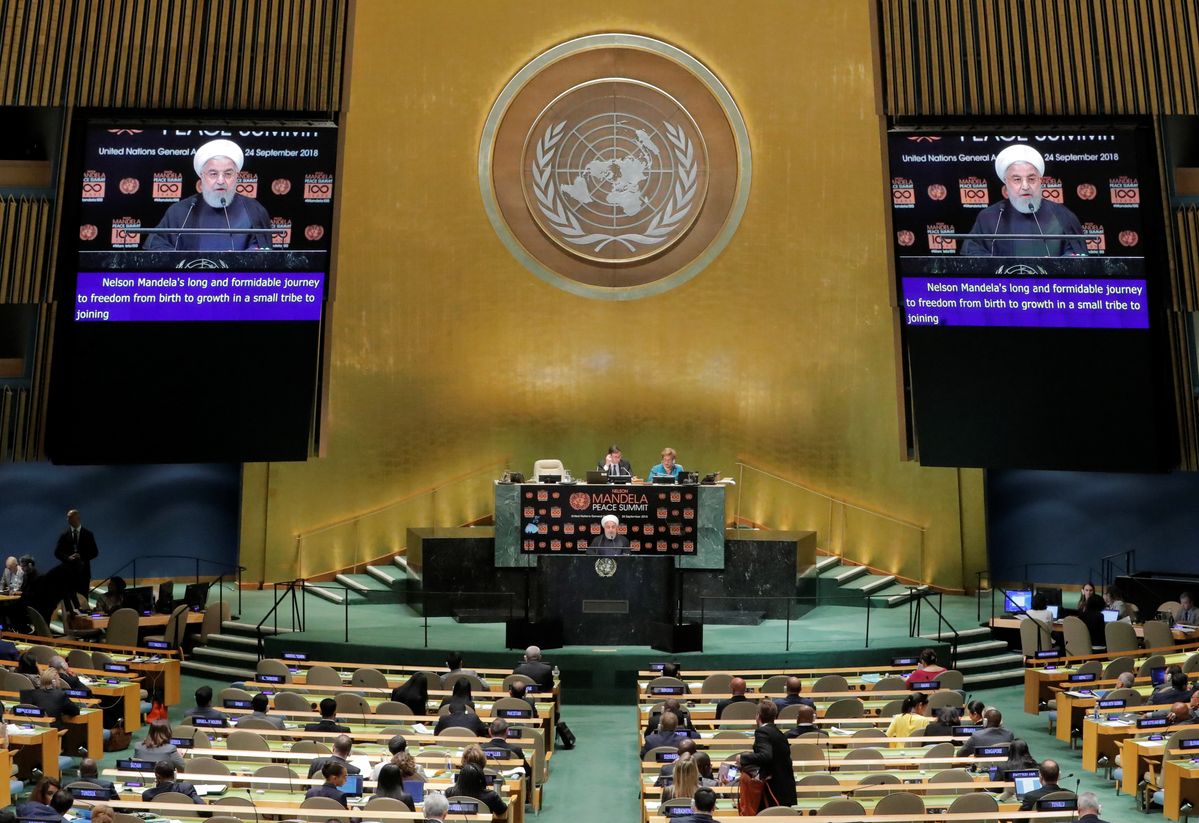 he annual UN General Assembly is now underway, and while the event rarely offers much in the way of high drama –few leaders, after all, bang their shoes on podiums, sniff the “sulfur” left behind by a US president, or whip out Looney Tunes-inspired illustrations of nuclear weapons – there is one big story to watch this week: Trump and Iran.

Later today, we’ll hear speeches from the US President and his Iranian counterpart Hassan Rouhani, while tomorrow Mr. Trump will chair a session of the UN Security Council that is ostensibly about stopping the spread of nuclear weapons generally, but which Trump evidently wants to focus on Iran in particular. In these two days we’ll learn a lot about the fate of the Iran nuclear deal and US policy towards the Islamic Republic.

For background: Earlier this year, the Trump Administration pulled out of the Iran nuclear deal because the president said the accord hadn’t done enough to limit Tehran’s nuclear program or regional ambitions. Washington has already put some sanctions back on Iran, but the most severe measures – on Iran’s vital oil industry -- will take effect in November. Ahead of that, Iran’s currency has slumped to historic lows while oil exports have fallen more than 30% since the spring.

The other signatories to the deal -- the UK, France, Germany, China, Russia and, of course, Iran -- have so far stuck to the terms of the deal, because they fear a complete collapse would push Iran to ramp up its nuclear program, fomenting a perilous regional arms race and raising the risk of a conflict that brings in the US.

Over the next few days, Trump and his national security team will press those governments to consider forcing Tehran to accept a new, broader deal with much more stringent terms. Fat chance, given that international observers had repeatedly said the existing deal that all agreed to was working just fine.

The Iranians, meanwhile, will be working the room not only to keep the other signatories in the deal – which Tehran has continued to adhere to – but also to seek fresh economic support to cushion the blow of US sanctions.

The trouble for the Iranians: While the other signatories will almost certainly remain in the nuclear deal, there’s not much any of them can do for Iran’s economy. Despite pledges by Brussels to shield European companies from new US sanctions, many of them are scrapping investment plans in the Islamic Republic anyway.

And with those oil sanctions set to take effect in just six weeks, Iran’s economic position is getting dicier by the day. As it happens, that is actually helping the hardliners within Iran who never wanted a deal in the first place, and who see a credible nuclear deterrent as something infinitely more valuable than any benefits that may come from an economic opening to the West (see: Kim Jong-un).

The wildcard: Trump says he’s open to meeting Rouhani on the sidelines of the UNGA, in what would be the first-ever meeting of presidents of the United States and the Islamic Republic. Hard to see it happening – for one thing, Iran’s Supreme leader back in August put the kibosh on any such meeting. For another, the blood is as bad as ever, with Tehran suggesting that the US was responsible for a terrorist attack on a memorial parade in Iran over the weekend.