Does Cuba belong back on the US's State Sponsors of Terrorism list? The Wall Street Journal Editorial Board showed their support for Secretary of State Mike Pompeo's decision on this issue in a recent opinion piece, "Cuba's Support for Terror." But in this edition of The Red Pen, Ian Bremmer and Eurasia Group analysts Risa Grais-Targow, Jeffrey Wright and Regina Argenzio argue that the WSJ's op-ed goes too far.

We are now just a few days away from the official end of Donald Trump's presidency, but the impacts of his latest moves in office will obviously last far beyond Joe Biden's inauguration. There's the deep structural political polarization, the ongoing investigations into the violence we saw at the Capitol, lord knows what happens over the next few days, there's also last-minute policy decisions here and abroad. And that's where we're taking our Red Pen this week, specifically US relations with Cuba.

The Trump administration this past week declared Cuba a "state sponsor of terrorism." Just to remind you, the Obama administration removed Cuba from that list in 2015 as part of a broader opening with the communist country. The Wall Street Journal editorial board is a big fan of the decision to put it back on the list.

Cuba has problems when it comes to human rights and suppression of political opponents, plus close ties to countries that the United States hardly friendly with, like Iran and Venezuela. But we think this op-ed actually goes too far, as does Secretary of State Mike Pompeo's parting shot of putting that nation back on this list.

So, let's get to it. First, The Editorial Board writes that "Cuba will attempt to coax Joe Biden to resume Mr. Obama's courtship, but the regime never honored its promises at home or abroad."

Well, Cuba wasn't really given a chance, and that wasn't the point. Trump started to roll back Obama's policies immediately after becoming president. Obama intended to engage the Cuban population and encourage economic opening with the United States as a way to bring about political change. The policy was never about the communist regime's "promises." 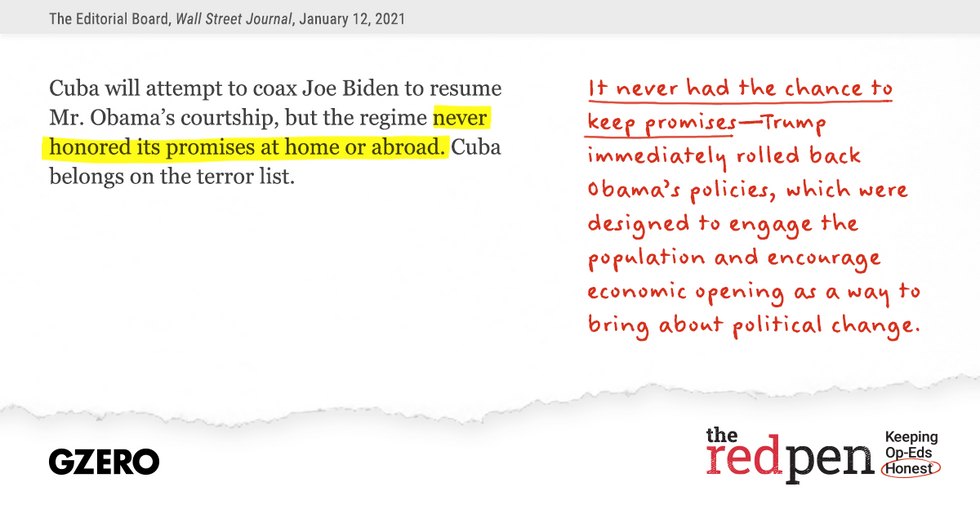 Next, the Wall Street Journal argues that Cuba is responsible for the "collapse of Venezuela's democracy." Maduro "survives in power thanks to Cuba," and Venezuela has become a "base for transnational crime and terrorism."

Now, it's true, Cuba has and does support the Maduro regime. So have Russia, Turkey, China, and Iran. US sanctions have also deepened Venezuela's crisis. And the United States doesn't seem so concerned about Venezuela being a terrorist base since Venezuela is not actually on the terrorist list itself. 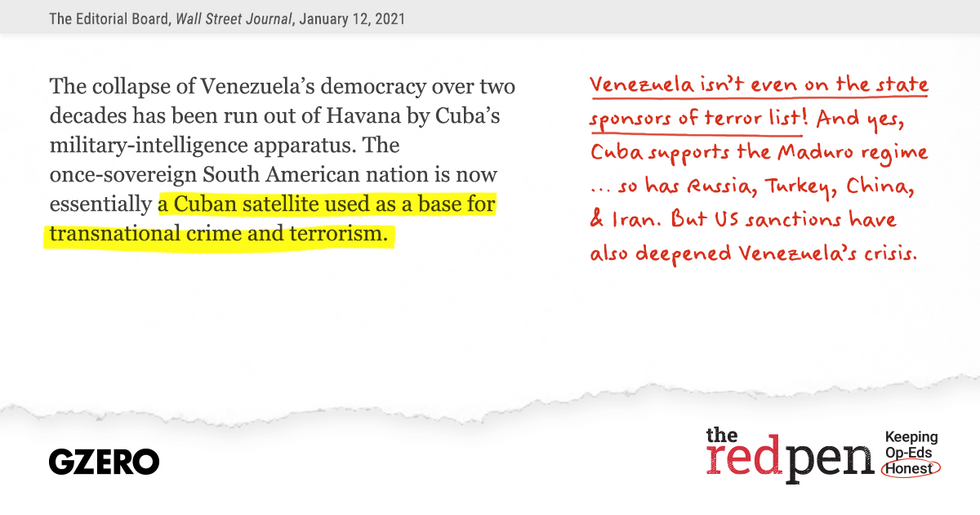 The op-ed also states that Cuba has "deepened and broadened its commitment to terrorism," and that the nation harbors terrorists and criminals wanted by the FBI and other law enforcement agencies.

By this standard it's true, but many US allies would also need to make the list. Saudi Arabia for example, has long harbored people suspected of involvement in terrorist attacks. France refuses to extradite its own citizens to face US courts. And by the way, the United States has harbored many anti-Castro exiles who have committed acts of violence in Cuba.

Now Cuba is far from being blameless, but that's not the point. Why put Cuba back on this list now? The decision has a lot more to do with the US political calendar than anything Cuba has done. The 11th hour move is intended to complicate Biden's Cuba plans, nothing more. 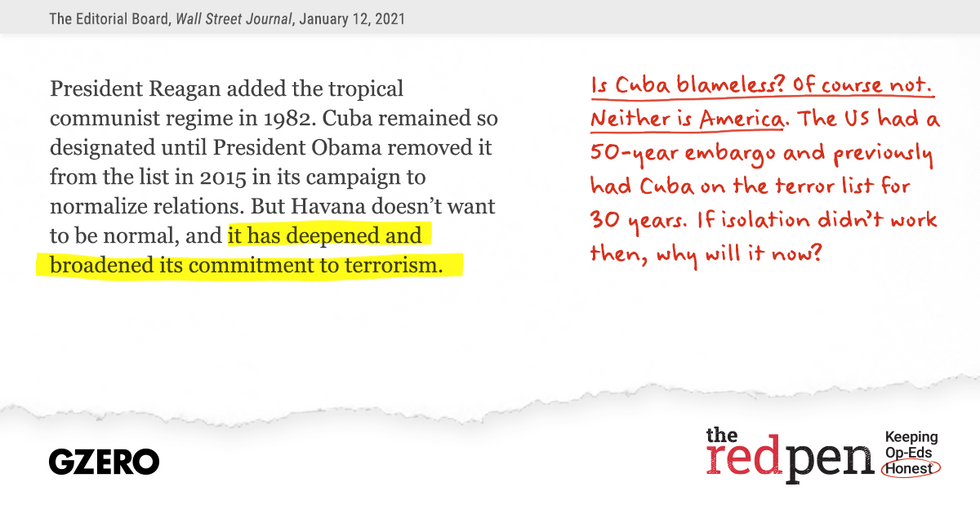 It was Ronald Reagan who first added Cuba to the terrorism list back in 1982, and the US had embargoes in place with Cuba for nearly 50 years. Communist government is still in power and still repressive.

What makes Trump, or the Wall Street Journal Editorial Board, think this time around is going to be any different? It feels more like another mess to toss at the incoming president and his administration.

Add it to the growing pile.

Mastercard focuses on rebuilding with a sustainability-centered focus

From accelerating our net zero timeline to creating digital tools for more sustainable consumer choice, Mastercard is working to build a more sustainable and inclusive digital economy. Watch and learn how we’re uniting in climate action with our network of banking customers, merchants and consumers – and helping to reforest the planet through the Priceless Planet Coalition.

A year of Biden

Joe Biden’s first year as US president included two major historic accomplishments and a series of (often bitter) disappointments that has his party headed toward likely defeat in November’s midterm elections. Biden’s own political future is increasingly uncertain.

4.7 billion: Spanish farmers protested on Sunday in Madrid against the leftwing coalition government's agricultural and environmental policies, which they claim are depopulating rural areas. No way, says the government, which has set aside $4.7 billion to stop the rural exodus.

Podcast: We have to control AI before it controls us, warns former Google CEO Eric Schmidt

Listen: Tech companies set the rules for the digital world through algorithms powered by artificial intelligence. But does Big Tech really understand AI? Former Google CEO Eric Schmidt tells Ian Bremmer that we need to control AI before it controls us.

What's troubling about AI, he says, is that it’s still very new, and AI is learning by doing. Schmidt, co-author of “The Age of AI: And Our Human Future,” worries that AI exacerbates problems like anxiety, driving a human addiction cycle that leads to depression.

Can we control AI before it controls us?

COVID has accelerated our embrace of the digital world. The thing is, we don't always know who’s running it.

Instead of governments, Ian Bremmer says, so far a handful of Big Tech companies are writing the rules of digital space — through computer algorithms powered by artificial intelligence.

The problem is that tech companies have set something in motion they don't fully understand, nor control.

Should China learn to live with COVID?

If omicron makes cases explode in China, the country's leaders will have to choose between weathering short-term or long-term pain.

Yanzhong Huang, senior fellow for global health at the Council on Foreign Relations, predicts that sticking to the zero-COVID approach at all costs will hurt the Chinese and global economy. In his view, learning to live with the virus is the way to go.

The Graphic Truth: How do US presidents do in their first year?

Joe Biden's approval rating has taken a big hit during his first year as US president. Biden is now just slightly more popular than his predecessor Donald Trump at the same point in his presidency. While Biden has made a series of policy and political blunders that might be reflected in polling, this is also a sign of the times: US politics are now so polarized that presidential approval has a low ceiling. We compare the approval ratings of the last five US presidents in their first year.

Iran and Russia heart each other. The presidents of Iran and Russia have little in common personally, but they share many geopolitical interests, including in Afghanistan and Syria. They also have a common resolve in countering "the West.” These issues are all on the agenda as Vladimir Putin and Ebrahim Raisi held their first in-person meeting in Moscow. Raisi is a hardline cleric who leads a theocracy with nuclear ambitions. Vladimir Putin, meanwhile, is a wily autocrat who enjoys provoking America and Europe, and has ambitions to return to the glory days of the territorially expansive Soviet Union — as seen with the Kremlin's recent provocations on the Ukrainian border. With the Iran nuclear talks on life support and Joe Biden already bracing for Russian troops crossing into Ukraine, Tehran and Moscow now have even more reasons to scheme and cooperate. Indeed, Moscow and Tehran have increasingly been cooperating on energy and security issues (Iran might be buying Russian military technology) as their respective relations with the West deteriorate.

A year of Biden

Podcast: We have to control AI before it controls us, warns former Google CEO Eric Schmidt

Can we control AI before it controls us?

Should China learn to live with COVID?

The Graphic Truth: How do US presidents do in their first year?

What would a Russian invasion of Ukraine actually look like?