Why is Russia on the UN Security Council?

“The UN is back,” said Melissa Fleming, the UN’s Under-Secretary-General for Global Communications. In an interview with GZERO Media on the sidelines of the 77th General Assembly, Fleming reflected on the return to in-person diplomacy after years of disruption caused by pandemic.

“There is this real feeling that the UN is the only place for global cooperation,” she said. “We cannot solve the world's intractable problems of climate change, of war, of refugees without multilateralism, and multilateralism is the UN. It is nations working together to solve problems.”

In the interview, Fleming also acknowledged that the collision of recent global crises had created uncertainty about the power of multilateralism. But she said recent diplomatic efforts lead by the UN, including the Black Sea grain initiative to help mitigate a growing food insecurity crisis, have brought renewed energy.

On Russia’s membership and role at the UN, Fleming said, “Russia's invasion of Ukraine has absolutely launched a discussion about how the Security Council works, how it is dysfunctional, especially when one permanent member of the Security Council is the invading country. So, it's obviously started a debate.”

Who can solve the world's "emergency of global proportions"?

Thousands of the world's most influential people are in New York this week to attend the 77th UN General Assembly at a time of multiple related crises. UN Secretary-General António Guterres wants to focus on rescuing the Sustainable Development Goals, or SDGs — the UN's blueprint for making the world a better place. Progress on the SDGs got derailed by the pandemic, to the point that they likely won't be achieved by the 2030 deadline. To get a sense of the scale of the problems and explore possible solutions, we brought in several experts to weigh in for a Global Stage livestream conversation "Rescuing a World in Crisis," hosted by GZERO Media in partnership with Microsoft.

Thanks to the pandemic, we're way off from UN Sustainable Development Goals by 2030. But Microsoft President Brad Smith knows the way to get the job done. In a Global Stage livestream conversation, Smith says he has deep faith in what he calls the "three-legged stool" of government, the private sector, and civil society.

Putin would rather die than admit defeat in Ukraine, says former Croatian president

Kolinda Grabar-Kitarović knows a thing or two about Vladimir Putin, who she met multiple times when she was Croatia's president. So, how does she see the future of Russia's war in Ukraine? It's not looking good. In a Global Stage livestream conversation, Grabar-Kitarović says that Putin is unlikely to back down from a "special military operation" driven by what the Russian leader sees as Western humiliation during the Cold War.

The impact of COVID-related educational disruption - and the growing inequality gap - could have big geopolitical fallout in the future. Why? Because with diminished education comes fewer economic opportunities. That will likely exacerbate already deep divisions, says Eurasia Group Vice Chairman Gerald Butts.

As the 77th UN General Assembly gets underway, a look at how the pandemic wiped out years of progress on ensuring inclusive and equitable quality education and promoting lifelong learning opportunities for all. COVID disrupted the lives of some 1.6 billion students around the world. How can we get education back on track before it's too late? Experts weighed in during the Global Stage livestream conversation "Transforming Education" hosted by GZERO Media in partnership with Microsoft.

All around the world, tens of millions of kids stopped going to school. Many of them only recently returned, and some never will. Can we still turn this around? Yes, but we need to rethink education, UN Secretary-General António Guterres says in a Global Stage interview with Ian Bremmer.

How can we bridge the "digital Grand Canyon"?

Make internet affordable, but not free for all

Should internet be free for everyone? A Global Stage debate 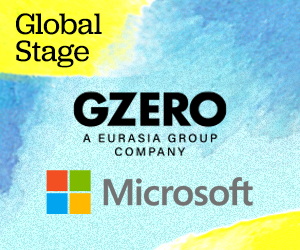 Egypt wants COP27 to be all about implementation

COP26 vibes so far: "What's it worth to save everything we have?"

About UsCareers PressContact Us Privacy PolicyTerms of Use
© 2022 GZERO Media. All Rights Reserved | A Eurasia Group media company.
gzeromedia.com