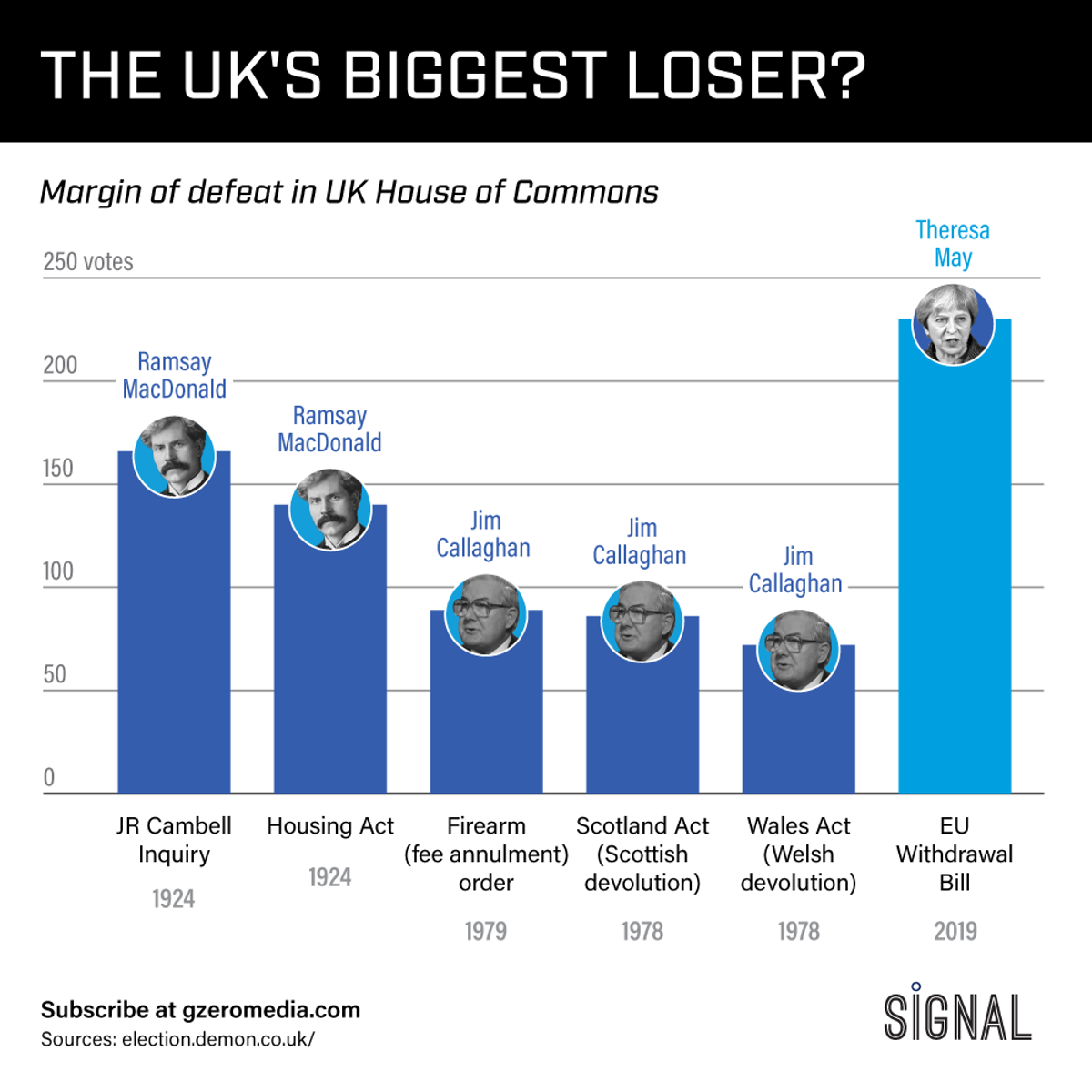 The size of Prime Minister May's defeat was truly historic. The last British leader to even come close to matching the 230 vote margin was Ramsay McDonald, who in 1924 lost a vote to withdraw the prosecution of a communist activist by 161. Here's a look at how yesterday's vote compares to previous defeats for UK prime ministers.

First, President Trump and Senate Majority Leader Mitch McConnell have already made clear they will move quickly toward a Senate vote to confirm a replacement before the election. Neither man cares about arguments that they should wait until after the election to move forward. Trump will name the nominee within days, and McConnell will begin lining up the votes. Four years ago, McConnell refused to give a vote to Obama's pick to replace deceased Justice Antonin Scalia because it was an election year, although for McConnell that argument doesn't apply now.

Second, this may set the scene for large-scale protests in many American cities. As for the election itself, this fight, however it plays out, is only likely to increase enthusiasm among voters on both sides by reminding them of the larger stakes that come with a lifetime appointment that can swing the ideological balance of a divided court. The partisan battle over the 2018 confirmation of Justice Brett Kavanaugh could be child's play compared to what could happen if Republicans try to confirm a nominee before the election, or even after it (especially if Trump loses).

Third, there will be no replacement for Ginsburg until a nominee can get 50 votes in the Senate. Of the 53 Republican senators, Lisa Murkowski (Alaska) and Susan Collins (Maine) have said in the past they don't believe a nominee should be rushed through close to an election. There are other names to watch, including a few in close races for re-election that might benefit by saying no to Trump. There is also Mitt Romney (Utah), the man who has emerged as Trump's most frequent Republican critic.

Fourth, here's the potential wildcard: The Constitution stipulates that there must be a Supreme Court, but it doesn't specify how many judges it should include. There have been more than nine justices in the past.

In theory, if Democratic candidate Joe Biden wins the election and Democrats win a majority in the Senate, Biden could nominate six new justices of his own for a 15-judge court. When Franklin Delano Roosevelt tried this ploy in 1937, it failed and dealt his presidency a heavy political blow. But 1937 is not 2020, and Biden might succeed where Roosevelt failed.

The bottom line: The death of Justice Ginsburg is a major plot twist for what has so far been a remarkably stable election, and it will reverberate through American politics for years to come.
ruth bader ginsburg supreme court us election DONALD TRUMP mitch mcconnell

The pandemic has forced this year's UN General Assembly to be mostly virtual, but will it prove to be an effective way for world leaders to discuss the critical issues of the moment? Ian Bremmer talks to UN Secretary-General António Guterres about the challenges of diplomacy in the Zoom where it happens. The exchange is part of a wide-ranging interview for GZERO World.

The episode begins airing nationally in the US on public television this Friday, September 18. Check local listings.

I don't think that as a legal argument you could make the case that he's violated the law. But as a principle, potentially shutting down a vibrant platform where a lot of people say a lot of stuff, it doesn't look good. I think he's in violation of the spirit of the constitution, but I have a hard time viewing it as a legal matter.